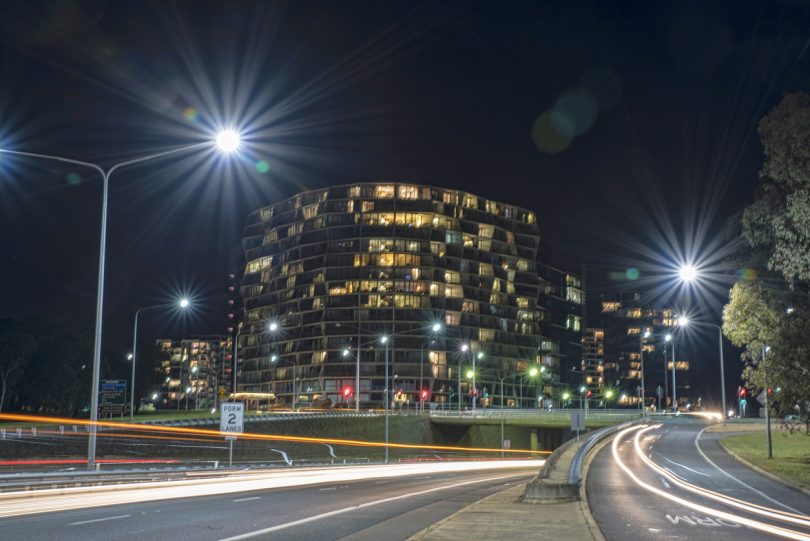 Light em’ up: ACT streetlights to get a smart upgrade.

80,000 streetlights across the ACT will start to be upgraded at the beginning of May under a new contract signed between the ACT Government and electrical company Electrix.

The contract will improve the maintenance, upgrade and power supply of the ACT’s streetlights in a seven-year partnership.

Minister for Transport and City Services Meegan Fitzharris said the deal will focus on keeping the lights on, getting energy efficient, and contributing to Canberra being a smart city.

Ms Fitzharris said the partnership was the first energy performance contract for streetlight services in Australia.

“A new digital control maintenance management system will be delivered as part of the upgrade to offer real-time monitoring of the network to automatically detect faults such as lamp failures or cable problems.”

The management contract will ensure broken lamps are replaced within two days instead of the current ten days, and will improve the energy efficiency of the network.

A significant proportion of the ACT’s streetlights will be upgraded as part of this new contract, delivering new LED lamps to streetlights in areas that currently have the oldest and most inefficient incandescent lights.

Electrix will work with its parent company Vinci Energies with a key focus on design and installation of energy efficient smart lighting technologies and related urban infrastructure for smart cities.

Minister Fitzharris said as part of the new contract Electrix will review the safety of streetlights.

“We want to ensure our streetlights are safe and working properly, but it’s important for the public to be aware and remember that electrical assets should be treated with care,” she said.

Can they put movement sensors on them, so they’re not burning all night long? Saves power and reduces light pollution.

Re powering them with “little solar panels on top”, the White Cockatoos have often wondered why that hasn’t been done either.

Call me naive but I've never understood why street lights aren't powered by their own little solar panels on top. Just saying.

Urgh, the new LED streetlights are awful, so much glare and so much light pollution, stick to the amber coloured lights!

What's the cost? - are we paying owners/shareholders big bucks while engineers/electricians are forced to take below acceptable contracts.

I agree 100% and how are Evo and ACTEW going to make access to the assets any easier than they ever did in the past. This is in part the reason for lights being out so long.

are you saying Evo used to do the work but are just attending the site to give access then the contractors do the work?

This has happened after the government gave up trying to sell the streetlights in 2016.

Albert Jacka - 16 minutes ago
Thought that would have been heritage listed for sure View
Adam Beams - 2 hours ago
Geoff White the water really isnt that deep around there so wouldnt have caught much other than bait fish. View
Graham Hannaford - 3 hours ago
Geoff White That's a cracker of an idea View
News 20

Sue Brooks - 31 minutes ago
So beautiful. Looks like a painting. View
Heather Alexander - 3 hours ago
LoveTulip Tops gardens, so glad you have posted these wonderful pictures. View
Teagan Brissett - 4 hours ago
Belinda Brissett better than nothing! View
News 50

Ashley Wright - 38 minutes ago
Julian Sortland believe already decided Canberra will use batteries rather than supercapacitors and the original vehicles are... View
Ashley Wright - 41 minutes ago
Susan Williams that’s good because light rail whilst using similar vehicles is different to a tram way in that it is design... View
Ian - 52 minutes ago
Seems stupid to me to be building this section when the government doesn't have all the approvals lined up for getting over t... View
Community 15

Linda Stapleton - 53 minutes ago
mmmm war with a magpie...so who is meant to be the superior species here? No offence meant but surely making friends with the... View
Guy Noble - 59 minutes ago
Jim Vizovitis yup play nice and they do,,,, we have had the same parents coming to us to feed there kids for years now View
Jim Vizovitis - 2 hours ago
Just get out and feed him. In a matter of days you can have them eating out of your hand. View
News 248

Over a quarter of Canberra’s streetlights now LED lamps

All of Canberra’s housing stock needs to be climate ready

@The_RiotACT @The_RiotACT
Funds from The Better Challenge go towards fighting childhood #cancer, a disease that affects three families every day in #Australia - and Canberra's own rugby team, @BrumbiesRugby, is helping out https://t.co/oO200sxG3s (1 hour ago)