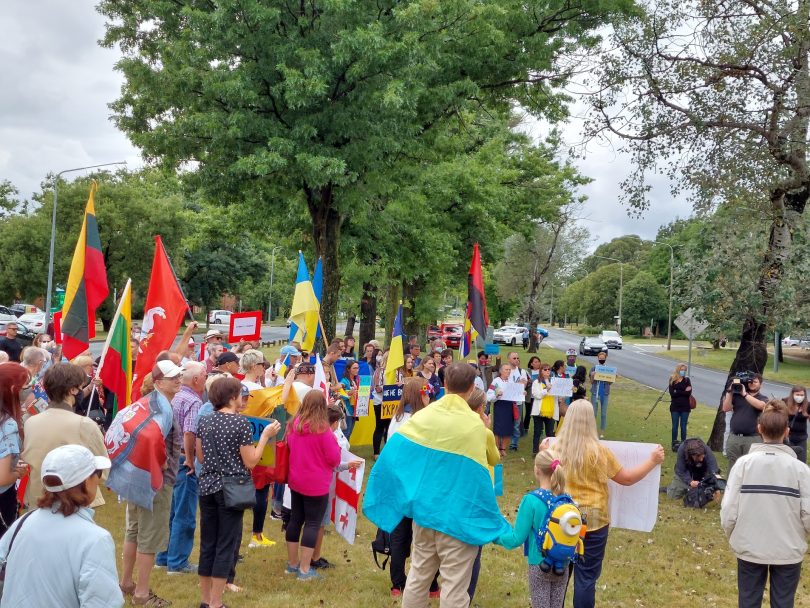 Protesters outside the Russian Embassy on Saturday. Photos: David Murtagh.

Members of Canberra’s Ukrainian community, and supporters from neighbouring countries, including a strong contingent of Lithuanians, protested outside the Embassy of The Russian Federation on Canberra Avenue this morning (25 February).

The protesters denounced the ongoing Russian aggression in Ukraine as Canberra’s Ukrainians try to spread their message loud and clear that this is an “unprovoked war”.

One of the organisers of the protest was Paul Trukhanov. He says it is important to note that this is not a war that began overnight.

“This war has been ongoing for eight years now because it actually started in 2014. My wife’s mother was unable to return home because she’s from Crimea and Crimea has been occupied by Russians since 2014. Since that time, she has lived with us here in Canberra,” Mr Trukhanov said.

“It’s never been any sort of serial conflict within Ukraine. It always was a war between Ukraine and Russia. Russia supplied the so-called Republics with a lot of weapons and they always had huge military contingents in this area.

“It always was the war between Ukraine and Russia and this is actually happening because Ukraine is breaking away towards the civilised world and Europe and NATO. That’s the main reason Putin has started with this aggression because he hates the Ukrainian people for looking for freedom.”

READ ALSO Canberra’s Ukrainian community has one simple request; ‘Come and pray with us’

Passing on the stories told by his family and friends still in Ukraine, Mr Trukhanov paints a frightening picture.

“Currently, their message is that Kyiv is now being hit by ballistic missiles and people are trying to hide underground at metropolitan stations,” he said.

“They’re putting sticky tape on the windows to protect themselves from broken glass.”

While asserting that the Ukrainian soldiers have successfully prevented Russia from achieving some of the goals they set in the initial days of the invasion, he says that Russia is still winning the information war and that’s where he believes “ordinary people” can help.

“Russia is distributing a lot of fake news in the media that make people think differently about the real situation in Ukraine,” Mr Trukhanov said.

“What we as ordinary people can do, is just let everyone around us know about the real situation, what’s actually happening. This is unprovoked aggression. This is aggression for absolutely no reason.

As for what they’d like the Australian Government to do, he stressed how grateful Ukrainians were for Australia’s current support but urged them to do as much as they possibly could and encouraged more sanctions on Russia.

“As Scott Morrison said, Russia should pay the cost of their aggressive actions.” 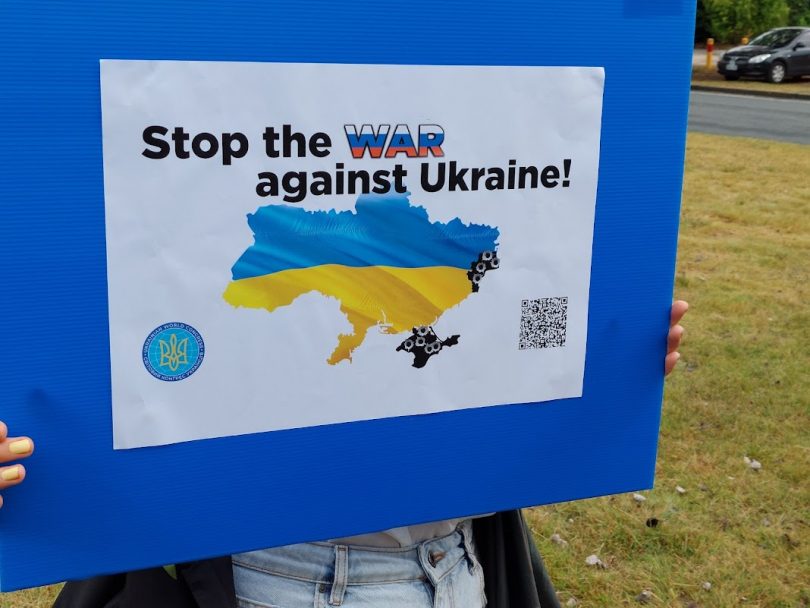 Many protesters, including Larissa, could barely speak without breaking down when recounting the dangers their families are currently facing in Ukraine.

“What’s happening at the moment … I can’t even put it into words … it makes me pretty emotional,” Larissa said.

She said one family member had been evacuated to Poland, another remains in Kyiv and another is in Cherkasy in central Ukraine.

Those that haven’t fled yet are likely to remain as “leaving is not a possibility and they have family and homes and lives there, so it is quite difficult to leave”. 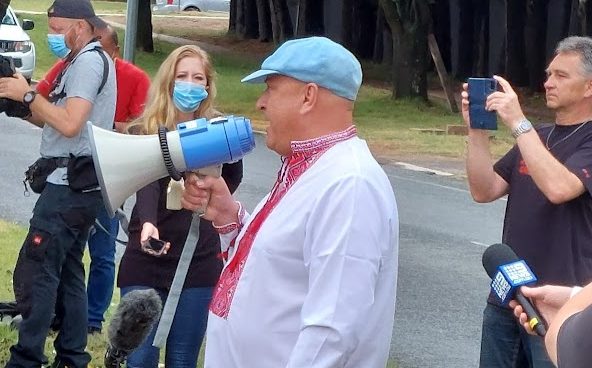 Ivan Slavich speaking at the protest this morning.

Ivan Slavich has family across Ukraine. He spoke to many members of his extended family last night and this morning and urged them to leave as soon as possible.

They told him it was too late.

“I said get out because my understanding is that Australia is expediting refugee visas for Ukrainians, and I said to them, ‘get out, get out now’. But they can’t. They said there’s no transport. All the roads are blocked. There’s literally military outside their doors,” Mr Slavich said.

“I told them, ‘go west, flee west’, and they can’t. I have relatives in Ukraine. It’s just awful.”

The little man who apparently sees himself as a modern successor to Peter the Great is sealing Russia’s fate as a client state of China.

He certainly has a Napoleon Complex.

Putin is a war criminal and Russia is committing genocide against innocent Ukrainians. Rise up innocent Russian people and overthrow your dictator Putin as soon as possible! The world stands with the people of Ukraine against Russian military invasion.

Here is a protest that has a real cause.

Russia are war criminals must be stopped

Yes all the people in the Ukraine are dear- sheesh no wonder Putin does so well …. And he will succeed as he is a super power and a very smart man- well the most of the Western world today concerned with minority rights- strong take from the weak- it’s always happened and always will

Blessings to these dear people in the Ukraine!!

My heart goes out to the brave people of Ukraine who are trying to save their country and folk from the clutches of the Tyrant of Moscow.

There is a tragic part of Ukrainian-Russian history we should all be aware of. In the former Soviet Union millions of men, women and children fell victims to the cruel actions and policies of the totalitarian regime. The Great Famine of 1932–1933 in Ukraine (Holodomor), took from 7 million to 10 million innocent lives and became a national tragedy for the Ukrainian people.

Thanks Acton. The Ukrainian Church in Turner have a memorial to that famine

Sad but realistically the West Is powerless. Putin has Chinese support. The end. Australia hasn’t even dealt with the Afghan refugees. What makes anyone think it has the political smarts to deal with China and Russia when they gang up? The US is too self-absorbed to have the solution right now. They can’t even deal with their own Jan 6 sedition. It’s all “look over there. It’s a spider” election propaganda.

If only it could make him stop!!

Sylvana Ransley , well, there was those 7 years since the Minsk II accords of 2015. That were disregarded.

Finally a protest worth its weight. 🙌🏾

Please post more times when you will be protesting. I joined you today and will join you again. Putin is like Hitler; arrogant and power hungry. Surrounded by his cronies…who feed his ego.

Not just Ukrainians there (born here in Australia like me and migrants). Lots of other peoples stood with us. Check the flags, including local Russians who are horrified to the point of tears by what’s happening. Thanks to them for speaking in Russian using the bull horn so that those inside were aware of the sentiments of us outside.

A Polish speaker said he’d be on the first plane back to Poland if & when it escalated into his country. Russian tanks were 60km away from the Polish border this morning.

Sanctions useless. NATO should have put troops and equipment on the ground in Ukraine before the Russian’s went in. Now it’s too late.

So the epidemiology expert has become a geopolitics and war expert? 🤔

Eddie Majcic so turning a limited conflict into a major war? How do you think a cornered rogue state with nuclear weapons might react? There’s limits to what is logical if it’s not a NATO member state

Paul Leins Putin is a thug and bully. If NATO stood up to him then he would not dare engage. We in the West allow these types way too much latitude. Its not like NATO didn’t see it coming they’ve seen it coming since before 2014 and have sat on their hands and done nothing. U heard this evening 100000 refugees have crossed the Polish border and the expectation may be up to 5mil….
Pution has had ample time to plan a contingency for these sanctions so they’ll be next to useless.

Eddie Majcic These sanctions are still going to be heavily damaging for the countries economy, whether Putin has attempted to prepare or not. The concern over what Russia would do with nuclear weapons is increasingly valid with Putin openly threatening to employ nuclear weapons against any state that intervenes, which effectively bars any potential interference from the West for fear of global nuclear conflict 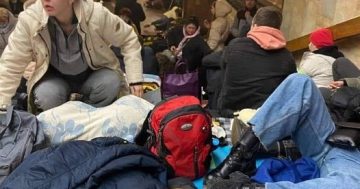 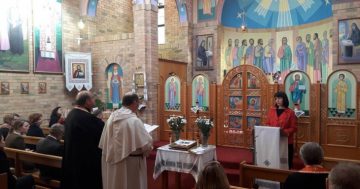 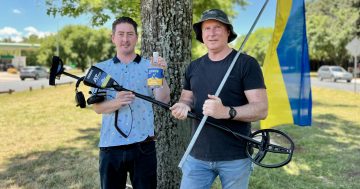 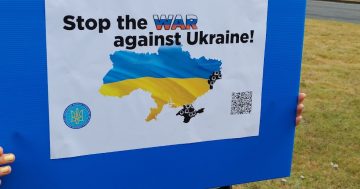 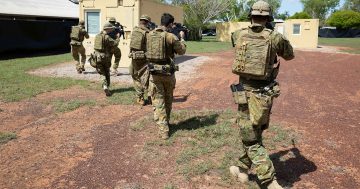 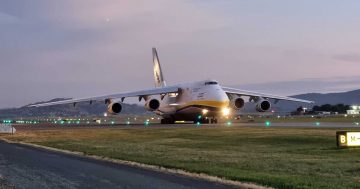