This morning the sponsors of the back to back champion basketballers, the Canberra Capitals, threw a celebratory breakfast for them and any fans who made it to Civic that early. 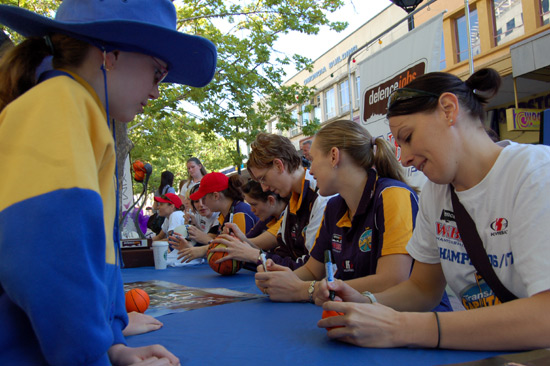 Because this breakfast was held in Civic, the government decided it didn’t have to hold a civic reception for them (as reported in the Canberra Times). Last year the Capitals got both a civic reception and a sponsors’ breakfast, and all other Canberra championship-winning sports teams have been granted civic receptions.

Quite a crowd turned out for the breakfast, which was hosted by Mix 106.3’s Mark and Lisa, and collected autographs on basketballs (big and small), whacky sticks and posters. 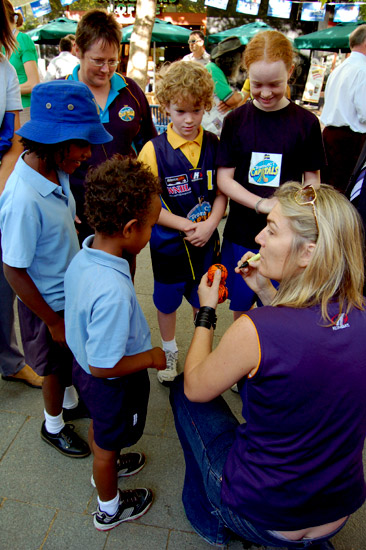 There were lots of excited kids around, some of whom participated in a ball spinning contest. The man in the brown jacket won the double pass to the show, somewhat bashfully considering his age compared to the other competitors. 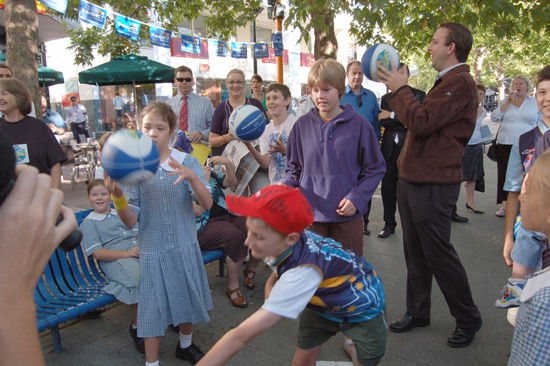 Breakfast appeared to be hamburgers with egg, though there were men from Lions cooking sausages. There was also flavoured milk and orange juice. 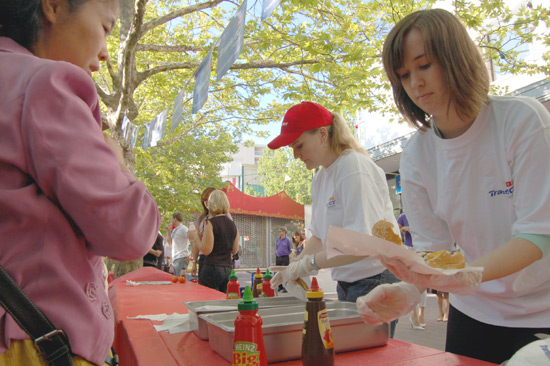 There was quite a lot of media around, as well as man+dog with digital cameras (this is the ABC’s Tim Gavel) 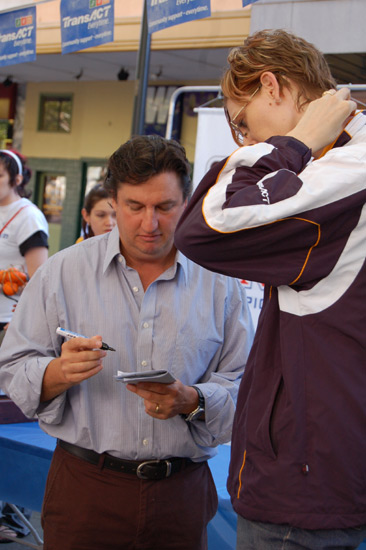 There was some kind of official handing over of the keys to the city with Michael Costello, Jon Stanhope and Andrew Barr but I managed to miss most of it (Bill Stefaniak and Brendan Smyth were also in attendance). Coach Carrie Graf did ask what the keys opened and Mr Barr said anything she wanted. 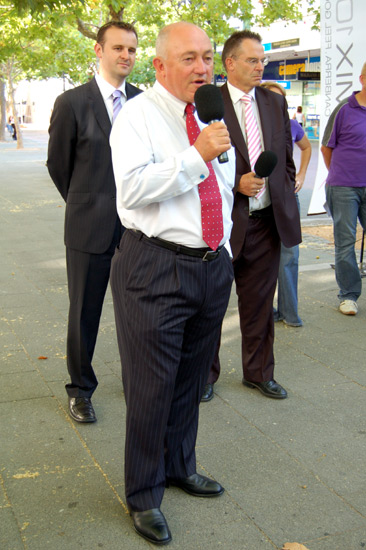 There were several lots of kids in school uniforms whose parents were trying to hurry them along a bit so they wouldn’t be too late for class. 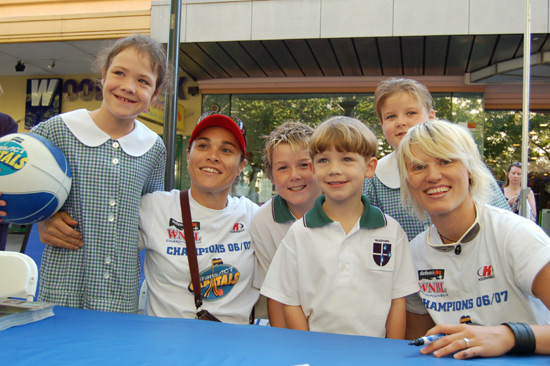 About 8.45 things started wrapping up but there was still business people on their way to work stopping for autographs. 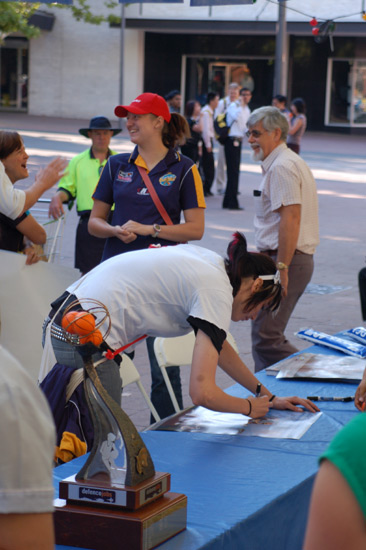 Himself??? Oh, how you assume.

Might be worth keeping an eye on the offensive ‘artline’ as well.

I thought that may happen…

And Atoz has earned himself a place in the moderation queue.

Good, they look so much better…

Actually high waisted jeans are set to make a come back. Well, thats what the girlie magazines are saying anyway…

ive seen hipsters on some women who have no discernible hips and muffin top the size of tractor tyres.

there should be a law.

I hate hipsters, they kind of disrupt that nice female shape…..

Maybe the coach could have chosen to wear a more appropriate pair of jeans, instead of wanky hipsters?
Lol, Mr Evil. You haven’t been shopping with the girly lately, have you? Try finding jeans that aren’t hipsters.

Atoz im sensing a little hostility towards lesbians and basketball

So Barr said the key could open anything: how about a school or two??? – Mr Evil

Lesbians rock! Women who wonâ€™t sleep with you for a reason other than your own inadequacies? Who could be against that! – johnboy

Both get my nomination for ‘pool room’ status.

Great shot of the plumber’s crack, too.

Basketball is so 80â€™s. And itâ€™s played by lesbians.

Lesbians rock! Women who won’t sleep with you for a reason other than your own inadequacies? Who could be against that!

I expected taller, but Jess Bibby was shorter than me – Only she and the coach were still there when I came through.
Probably why she was able to do such a good job of ducking under the others and pinching the ball off them!
Not so with footy – met up with the Broncos some years back and “little Alfie Langer” was at least an inch taller than me, meaning the big guys were huge…

He *is* interviewing a basketballer, Hasdrubahl.

Is Tim Gavel only four feet tall – or is he kneeling for some reason?

I would have gone out to say well-done, too early for me though. Congrats to the cap’s. 2 in a row.

Stanhope looks unhappy… didn’t he back them? I guess the no confidence issue is spreading.

Congrats to the Caps… anybody know how many will make the Opals training camp?

Basketball is so 80’s. And it’s played by lesbians.

Trish Hunt - 42 minutes ago
We just had a week in Canberra visiting our son and we commented on the long grass everywhere we went. I ask if there was a m... View
Robert Curtis - 44 minutes ago
Ken couldn’t happen in the Watermelon Republic of the ACT! View
Amy Clark - 3 hours ago
Kirstin Maree we’ve (well Anthony) has been doing our nature strips and down along the walkway and next doors for a while n... View
News 18

Rick S Tar - 42 minutes ago
Michelle Kwan a better camera and or drone would of captured the moment better. Cyber Monday still has some sales. View
Charlie Williams - 1 hour ago
In my time it was up and down all the time and didn't really seem to have anything to do with local rainfall- pub talk in que... View
Charlie Williams - 1 hour ago
Wayne Lutter don't forget Tim flannery - it will never rain again! View
Opinion 58