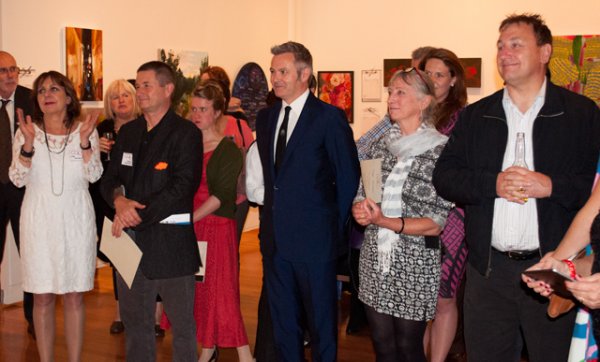 Capital Arts Patrons’ Organisation (CAPO) announced the winners of the 14 awards for 2015. It’s the philanthropic organisation’s 31st Annual Grant Round where the winners of the awards are announced at CAPO’s Annual Art Auction fundraiser and celebration, which is the culmination of CAPO’s work to support and celebrate local artists and arts patronage. Held at the Canberra Museum and Gallery (CMAG) the annual event was surrounded by 140 artworks generously donated by local artists, the awards were presented by our new patron comedian, musician, painter and television presenter Paul McDermott, together with the Awards’ respective sponsors. The CAPO Awards provide financial and in-kind support for a range of new arts projects by emerging and established artists. The CAPO Fellowship Award, the Rosalie Gascoigne Award, and the Ambassador Award are funded through the sale of donated art at the annual art auction. Other awards are sponsored by businesses trading in our area.

CAPO’s most prestigious award the CAPO Fellowship (worth $15,000) was presented by Patron Paul McDermott to glass artist Kirstie Rea. Kirstie being the 2015 CAPO Fellow intends to use the Fellowship to support a major survey covering two decades of her work, resulting in an exhibition at Canberra Museum and Gallery in 2015. 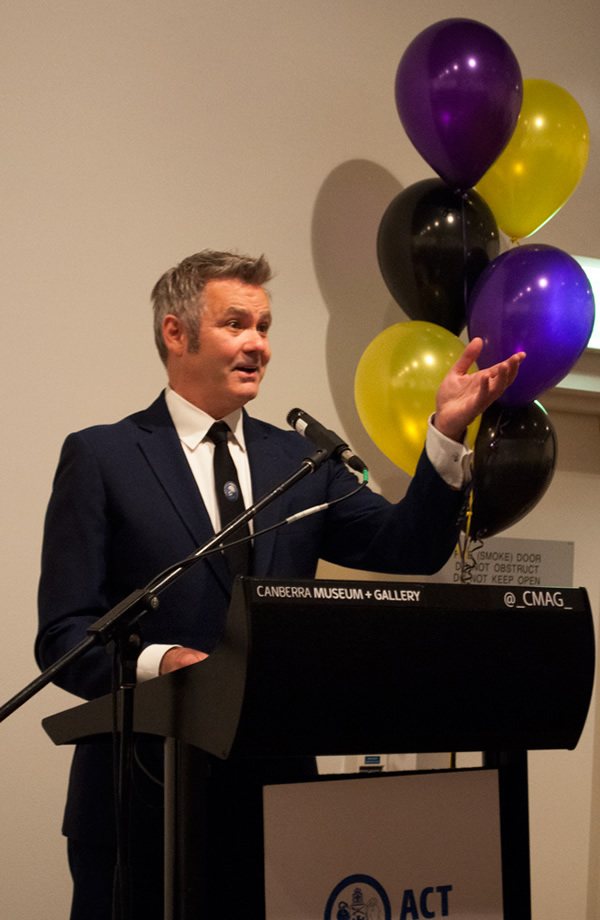 Peter Maloney winner of The CAPO Ambassador Award will use his grant to produce a series of large scale paintings to be exhibited at Utopia Art Sydney during 2015. With this body of work he’ll be exploring new ways of using colour and incorporating audacious texts.

The Rosalie Gascoigne Memorial Award has been presented to Jacqueline Bradley. This grant will fund the completion of a new body of work originally conceived during a residency in Gros Morne National Park, Newfoundland. The outcome of the project will be series of 14 wearable sculptures and 2 performances in these works.
The Macquarie Wealth Award goes to Tom Skeehan who will apply the grant to the Skeehan Studio to further develop their new collection titled SETTO. This new range extends into furniture and lighting products while supporting Australian manufacturing. This new body of work will be officially launched at the Nishi Gallery in New Acton in early 2015.

The Workplace Research Associates Award was given to Alex Asch who will be using the CAPO grant to create a bronze sculpture for his 2015 solo exhibition at Beaver Galleries.

The Sage Legal Services Award went to Christopher Huet (better known by his stage name C.J. Bowerbird) who will be using the grant for audio recording and performance equipment to expand the artist’s spoken word practice and will be used to develop a performance on masculinity to be shown in the second half of 2015.

The Eckersley’s Materials Award will allow Julie Brooke to make new paintings next year developed from her current collaboration with applied mathematicians at the ANU. This work will be exhibited in Sydney and Melbourne in 2015.

The Fuji Xerox Australia Sustainable Art Award went to Ashley Eriksmoen and this award will assist her participation as an Artist-­in?Residence at Chiang Mai University Thailand in January 2015 in order to research and develop new works for an intended exhibition later in the year.

The inaugural Canberra Weekly Award was presented to Jeremy Lepisto. This award will afford the purchase of a new piece of equipment that will greatly help advance the infrastructure and ability of Jeremy’s small studio in Queanbeyan, as well as be used to expedite the work that he and his wife will make for themselves and for other artists and designers in our creative community.

King O’Malley’s Emerging Artist Award was given to Shellaine Godbold Funding for this project will contribute to the costs of having large scale acrylic pieces cut and routed for a new series of acrylic works based on her recent residency and travel throughout South East Asia.

Capital Insurance Brokers Emerging Artist Award went to Richielde Flavelle who will utilize it for the purchase of materials for an interactive community installation that will transform Canberra Museum and Art Gallery 4 during Stepping Up: Australian Ceramic Triennale in July 2015.

McGrath Woden Emerging Artist Award was given toAnnika Romeyn’s award will support the creation of new paintings and drawings for Annika’s solo exhibition at Flinders Lane Gallery, Melbourne in 2015.

The National Press Club of Australia Emerging Artist Award went to Jemima Parker This award will assist with the purchase of materials and equipment to construct a new series of sculptural textile forms to be exhibited at ANCA Gallery, Dickson in May 2015. 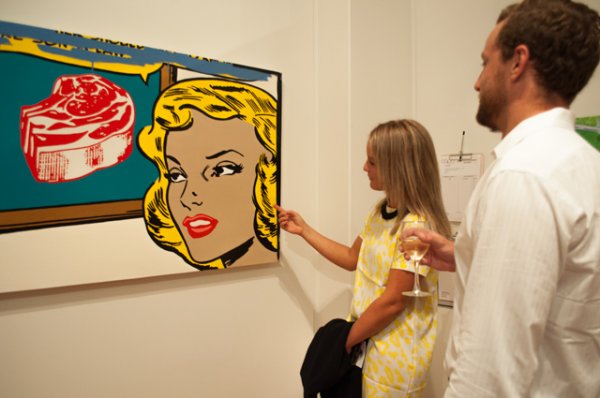 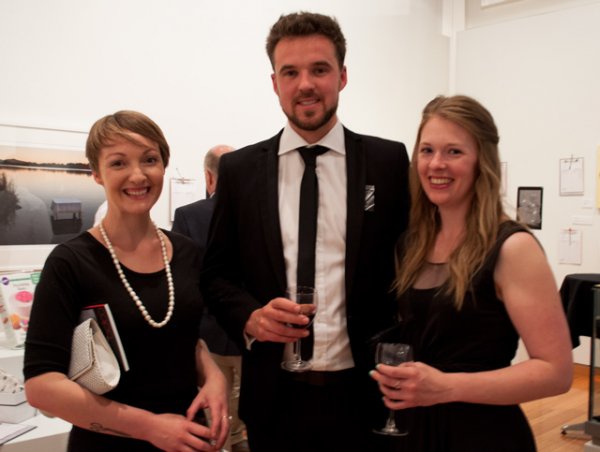 Alex Asch was born in Boston, Massachusetts, USA and was involved in university art programs in Los Angeles and New York before moving to Australia and studying art at the Australian National University in 1988. He has provided technical assistance to a number of arts organisations around Canberra, and has exhibited extensively in solo and group exhibitions throughout Australia. In 2008, Alex was awarded the Rosalie Gascoigne Award by the Capital Arts Patrons Organisation (CAPO). In 2009, Alex was a finalist in Bondi’s Sculpture by the Sea, and was invited to represent Australia in Sculpture by the Sea in Denmark the same year. Alex’s work is in corporate collections in Australia, USA, UK and Netherlands as well as Artbank, the ACT Legislative Assembly, the Wesley Art Foundation and Canberra Museum and Gallery.

… and could cause confusion for a lot of people.

“The Workplace Research Associates Award was given to Alex Asch who will be using the CAPO grant to create a bronze sculpture for his 2015 solo exhibition at Beaver Galleries.”

Interesting – Beaver is a commercial gallery, so the works will be on sale. Some 65% of the proceeds made under this grant will go to the gallery? Is this usual for arts grants?

How long has the powerlifting organisation been in existence?

Jacq Miller - 3 hours ago
shame there are no longer all 4 in situ View
Barry Matson - 6 hours ago
of what? View
Michael Guina - 6 hours ago
It has to start somewhere and those two buildings are living example . View
Opinion 80

Max Kelty - 7 hours ago
Bel Lee your housing manager mustn't be doing their job then or else processes have changed. When I was a HM at HACT people w... View
William Coats - 11 hours ago
The land tax was to stop people “land banking” houses should be used as homes not stagnant investments View
Lea Powell - 17 hours ago
William Coats it takes time to change policy directions. It’s not as simple as a click of the fingers. View
News 8

HiddenDragon - 8 hours ago
Some cautionary words here about the limits of battery technology - https://www.abc.net.au/news/2021-02-16/bill-gates-zero-em... View
dulynoted - 10 hours ago
those statistics might be outdated; renewables are getting cheaper and more energy efficient every year as technology improve... View
Capital Retro - 12 hours ago
In which way isn't nuclear power profitable? It depends on which experts you are talking too: https://www.ceda.com.au/NewsAnd... View
Sport 2

bj_ACT - 17 hours ago
Yes razor it’s a good point. Agree there are pockets of Tuggeranong and Belconnen that could do with some ACT government do... View
mattm - 18 hours ago
There are almost 130 Councils in NSW, and most of them do a much better job with municipal services than the ACT Government.... View
Heavs - 19 hours ago
Competent councils - like this one? https://www.canberratimes.com.au/story/6978805/nsw-central-coast-council-to-be-sacked/ Or... View
Community 1

Sammy Elder - 19 hours ago
What a great collection of memorabilia, thanks for sharing the images and some of the history behind them. View
Property 7

@The_RiotACT @The_RiotACT
How long since you've gone out for authentic Mexican food? Mochachos is bringing the heat to Kingston https://t.co/lsjPa6sCey (8 hours ago)

@The_RiotACT @The_RiotACT
Property prices are skyrocketing in Canberra, and auctions are the hottest place to be right now. We have some auction tips from the experts https://t.co/U4VvoS6BaQ (9 hours ago)