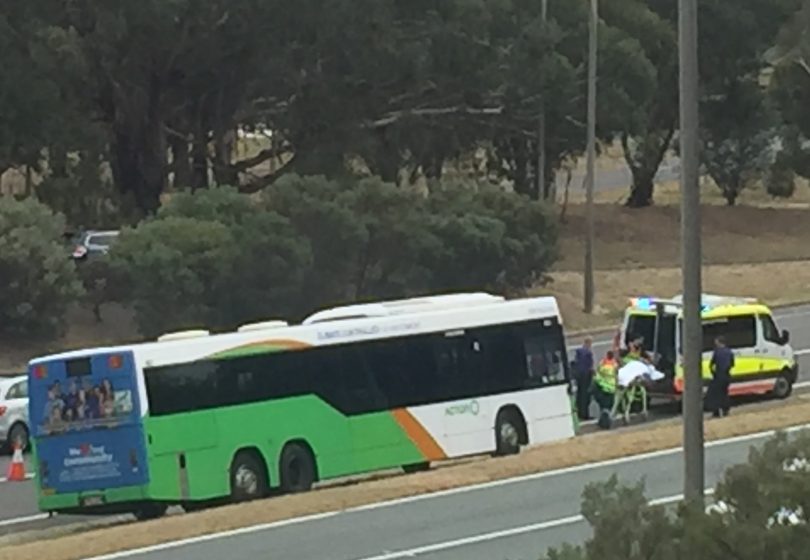 A person is placed into an ambulance after the accident at Yarra Glen this morning. Photos: Tim Benson.

A collision between a car and bus at Yarra Glen this morning caused major traffic delays on major arterials into the city.

Traffic headed for Adelaide Avenue was backed up for kilometres along Yamba Drive and Cotter Road as emergency services attended the accident, that happened just after 8am near the Kent Street off-ramp in Deakin. 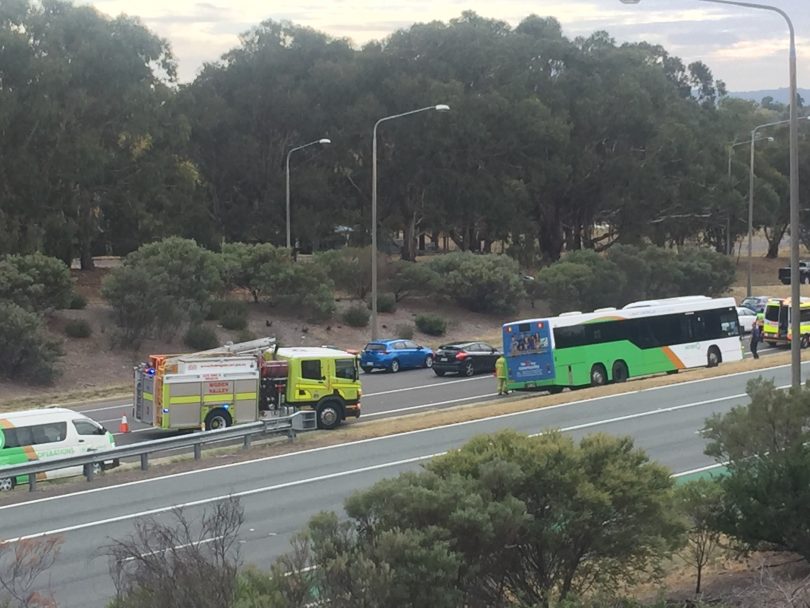 Two in a week in the same vicinity is a bit unfortunate. Any news on the detail, like did the bus run into the rear of a car in the T2 lane? Things willbe safer when the light rail starts to run along this stretch because it won’t be sharing the road with other traffic

It would have been safer if it was kept a Bus only lane with raised curbs to keep private motor vehicles out!

Like the bus-bahn in Adelaide? They would also have to ban motorcycles and emergency vehicles.

Ben Norris - 17 minutes ago
Can we we move the Northbourne flats junkies out of molonglo to whitlam now please? We've had our turn of non stop burglary.... View
Patrick Harrington - 7 hours ago
I'm sure the residents of Wright and Coombs will love a shopping centre in Whitlam. If Whitlam can actually get a shopping ce... View
Property 4

Daniel Duncan - 9 hours ago
Clinton good luck with that. View
John Sykes - 10 hours ago
Peter Major that would be an interesting outcome. Diesel rebates to mining and agriculture allow them to function against int... View
Ray Whiteman - 14 hours ago
Hahaha! You think EVs are going to get a free ride? Wait until they are more popular, then the costs will hit owners View
Motoring 35

Carol Ranft - 9 hours ago
Michael Grinceri It would help if they advertised why a speed limit was chosen View
Ursula Gamal - 9 hours ago
👏👏👏👏👏👏finally!!!!!! View
Community 33

Stephen Esdaile - 11 hours ago
And how hard is it to cross the border to get a new set of shoes on the car? At least the fuel tax works because there's no p... View
Julie Macklin - 11 hours ago
Km per year should differentiate between (congested) city with alternative ways to travel, and (not congested) country, often... View
News 1

bikhet - 13 hours ago
Road usage charges have been discussed among economists for several years now as a form of taxation to replace fuel excise. O... View
Breaking 1

JC - 14 hours ago
Not that I care who the liberal senate candidate is I can see why many are so annoyed. The way in which old Zed was originall... View
News 5

Martin Budden - 14 hours ago
The government has been very clear: CRS are welcome to do it in Hume, but not in Fyshwick. CRS just needs to switch to Hume. View
News 16

Glen Sturesteps - 14 hours ago
Further proof of me being right, not that we needed it 😬 View
Hayley Marie - 14 hours ago
Kooms Sam I have a keen interest in native flora. I even drink a gin called “the botanist”, which is telling... View
Anna Louise - 15 hours ago
Glen Sturesteps looks like you were right 🤷‍♀️ View
Lifestyle 23

yoyoyo - 14 hours ago
They do bulk orders i.e. 100 apartments at a time. Good luck getting a price out of them. View
show more show less
*Results are based on activity within last 7 days

@The_RiotACT @The_RiotACT
Handmade Canberra partners with GIVIT to make it easy to brighten up Christmas for bushfire-affected communities https://t.co/sDzQvLLrus (9 hours ago)

@The_RiotACT @The_RiotACT
Looking for an exercise buddy? Meet Cookie, an active pooch who is at @rspcaact hoping to find a new owner https://t.co/0AeZxL5DVO (10 hours ago)