Social media followers across the world have waited with bated breath and today the magic finally happened – Eric the Caterpillar transformed into Eric the Tailed Emperor Butterfly.

About 9:44 am Wednesday, 23 February, the diminutive social media star from Binalong completed his 17-day transition from chrysalis to winged beauty right before the eyes of the one person he literally owes his life to, Leanne Heffernan. 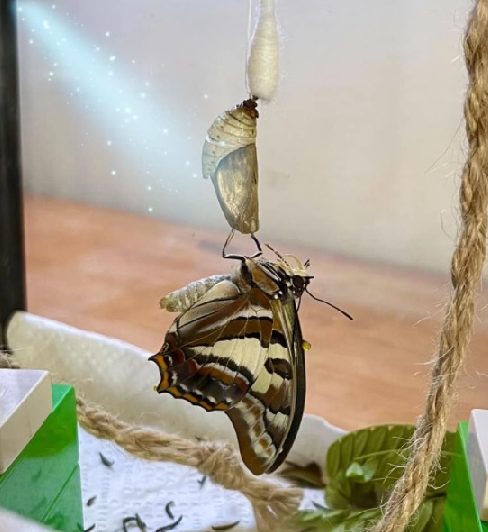 Minutes after emerging from his chrysalis Eric was all aflutter. Photo: Leanne Heffernan.

Eric’s do or die story had Leanne, her family, fellow Binalong resident Melanie Edwards, with her PhD in Biology, and thousands in the social media world maintaining an aquarium-side vigil after he was first discovered toodling around on Leanne’s verandah in early February.

Alongside daily weather reports and updates from fans, Leanne’s commentary rivalled that of the late Tony Greig (Tony could always bring the slow game of cricket to life) with her fascinating and highly entertaining side bits, stories and observations.

“Perhaps I have become so deluded from spending the last 2+ weeks staring obsessively into a fish tank at a little green pod that my brain has snapped and is now fooling my eyes into believing that there are changes to be seen is that what is happening here?? Please tell me you guys can see what I’m seeing!!” she wrote.

The changes were indeed real as areas of the green crysalis – hanging by a floss thread from a cotton bud propped up by Lego – turned brown, turning Lisa’s stomach slightly at the thought the tachinid fly larvae who had earlier attached themselves to Eric had indeed penetrated his body.

She prepared the nearly 10,000 followers for a potentially fatal outcome.

“I don’t even like saying that,” she said, “but when you consider the disturbances Eric faced with the removal of the fly eggs and being interrupted in the early stages of his first attempted metamorphosis, this is also a very real possibility.” 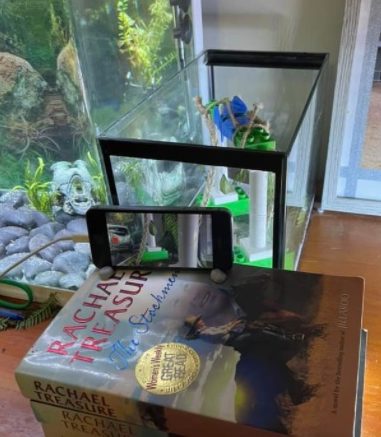 There were also the observations of renowned butterfly experts, one of them Queensland entomologist Dr Trevor Lambkin, who has notched up some 40 years of study of the species.

It was Dr Lambkin who said that in all the years out in the field he had only ever found one or two good Tailed Emperor pupae. The rest had contained hundreds of wasps.

“I don’t know about you guys but I sure had no idea how much the odds were stacked against butterflies from the moment they started out life as an egg on a leaf,” Leanne said.

But Eric was made of sterner stuff and Leanne, armed with a GoPro and mobile phone, was set to capture it all on time lapse.

“The whole thing seems completely surreal! I couldn’t believe it when I realised I could see his wings starting to show through the chrysalis last night, then it was a mad rush to set up cameras and lighting in case he came out overnight!” Leanne told Region Media.

She and Eric hung in there and this morning Leanne was pacing like she was in a maternity ward waiting for her tiny ward to emerge.

Within 60 minutes of his gradual change from deep green to a light green, Eric – all cream, brown and black like a catachino (cappuchino-coloured caterpillar) emerged from his delicate casing, wriggled his legs, fluttered his wings and made ready for the world.

Leanne says the moment he emerged from his crysalis and unfolded his wings was probably the most magical, unbeatable moment of her life so far.

“Not that I am biased or anything, but he is the most beautiful butterfly I have ever seen!” she said.

The event was also witnessed by Leanne’s youngest children.

“My four-year-old and nine-year-old stayed home from school to watch it,” she said, “then my four-year-old burst into tears because she wants to keep him as a pet.”

Once Eric’s finished getting his wings ready and he’s had something to eat, Leanne said he would be taken to a paddock behind the family home to be set free.

“I found a spot where there were lots of other Tailed Emperor butterflies fluttering around, so that’s where we will release him,” she said. “There’s also a huge patch of blackberry bushes just over the fence which will provide a very tasty food source for him, since these guys love to eat rotting fruit.”

It will be a bittersweet moment, she said.

“I can’t wait to see him flutter off into the world and join his friends and family,” Leanne said, “but I also probably won’t sleep for the next several nights worrying about whether he’s okay or not.

“I hope he has a happy drama-free life and goes on to make more little Erics to continue the circle of life.”

The Tailed Emperor butterfly has a lifespan of five to eight months. Two to three generations can be produced in a single year.

This was so wonderful to follow for a couple of weeks. A shining light during not such great times ❤️ Eric brought so much joy

It brought many people together.
We all needed this .
It was just amazing to watch and helping nature is so rewarding ❤️🦋🦋

Such a wonderful story 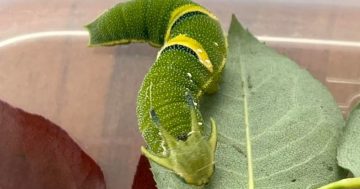 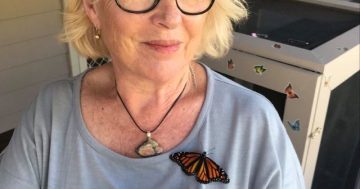