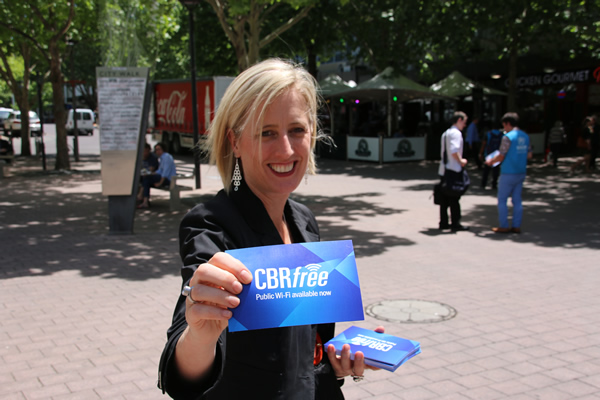 “This is a significant moment for Canberra and represents the ACT Government’s commitment to our future as a smart and digital city,” the Chief Minister said.

“We want to ensure Canberra is a place where businesses and entrepreneurs can compete globally in new knowledge-based and ICT industries.

“The rollout of CBRfree Wi-Fi will continue to make Canberra a place of influence and innovation. It will encourage vibrant town centres where Canberrans are connected to their community and are able to engage with Government services easily.

“It is fantastic that iiNet have offered to increase the download limit of CBRfree to 250MB at no additional cost to the Territory. This allows iiNet to create a homogenous service across the cities in which it delivers free public Wi-Fi while giving Canberrans even greater connectivity.

In May this year, the Chief Minister announced that as of October Civic East – from Garema Place to the Convention Centre, round to Gorman House and up to Girrahween Street in Braddon – would be the first area of the city to go live with CBRfree public Wi-Fi. This would be followed with a staged rollout in other town centres and commercial precincts over the following 12 months.

“The next area of Canberra that CBRfree public Wi-Fi will be rolled out in is Civic West – from Moore Street to the New Acton precinct. This area is scheduled to be fully live in January 2015,” the Chief Minister said.

“Over the coming months, as free public Wi-Fi is rolled out across all of Civic, Canberrans will start to see signage that will identify the free public Wi-Fi hotspots. I encourage you all to log on and check out the new network,” the Chief Minister concluded.

CBRfree public Wi-Fi was recently made available at this year’s Floriade and was incredibly popular. There were more than 48,000 sessions and nearly 13,000 unique users connecting to the network over the duration of the festival.
The new free public Wi-Fi service will provide users with 250 megabytes per day, totalling 7.5 gigabytes per month. An example of the type of internet activity Canberrans will have per month is:

For more information on the rollout of CBRfree public Wi-Fi visit www.digitalcanberra.com.au.

This government is always finding new ways to waste money.

And what does our lovely Government plan to do with the usage data they collect?

It’s already been proven elsewhere that Government run “free WiFi” is used to on-sell usage information to third parties. How do people using it feel about having their movements tracked through the WiFi zone as they bounce from access point (AP) to access point? Shops then buy this info to target products at you. Or better yet – malicious parties (or the Government even) use this data for intrusion into our lives?

With 3G/4G speeds and connection covering almost 100% of the population, who really needs this – and with a 250MB limit it’s useless. Yet another unneeded joke from our Government!

Excellent, I have to go and try it. While I’d not typically use it a lot, it is a huge plus for visitors to the city, particularly from overseas. You’ll find similar free Wi-Fi networks in other cities around the world and we found it particularly useful when travelling overseas as a family. I like it, good work ACT Govt.

“We want to ensure Canberra is a place where businesses and entrepreneurs can compete globally in new knowledge-based and ICT industries.

How exactly is giving free wifi in the city going to do that?

3G/4G coverage is good enough that it’s faster for me to just use that than have to go through the stupid login process for free wifi. Plus I can access anything I want, no firewalls or exception filters.

I’m sure the growing number of homeless youth will really appreciate the effort spent on this.

Stuart Ribot - 20 minutes ago
Ray Payne needs history lessons🤣 View
ghutch - 8 hours ago
A lot of good comments. Why don't we celebrate Oz Day on 1 Jan. Yeah I know you all still asleep from new year eve. But is th... View
Jenny McInnes - 9 hours ago
David Johnson it most likely was a public holiday there then View
Lifestyle 1

Colette Robinson - 3 hours ago
Adrian Fui Fui Moy but the path *is* being used for racing. Pedestrians and slower cyclists in either direction are merely ob... View
dolphin - 5 hours ago
despite your name you are neither rational or a very good observer. View
Dani Glatz - 7 hours ago
The simple answer Mark is there is no such thing as a cycle path in Canberra. Only Shared Paths. Would you choose a road with... View
Property 8

Dee Manders - 3 hours ago
I'd love it. View
Melissa Pearce - 4 hours ago
Maryanne Gates, can you and Nigel buy this place so I can visit cos I don’t have the time to sell my place and move! View
Bec Soric - 4 hours ago
Dee for when you win the lotto? View
News 18

Peter Curtis - 6 hours ago
Not to sure what a "Canberra mentality" would be but as long as we surrender the principle of solidarity for the belief that... View
Food & Wine 1

Jackie White - 10 hours ago
Thank you. I never walk around the lake with headphones precisely because of the risk of collision with a cyclist View
James Messervy - 10 hours ago
Jackie White no, I always ring my bell or call out.... View
Community 7

Susanne Jennings - 10 hours ago
Great to see it so successful- well done! View
show more show less
*Results are based on activity within last 7 days