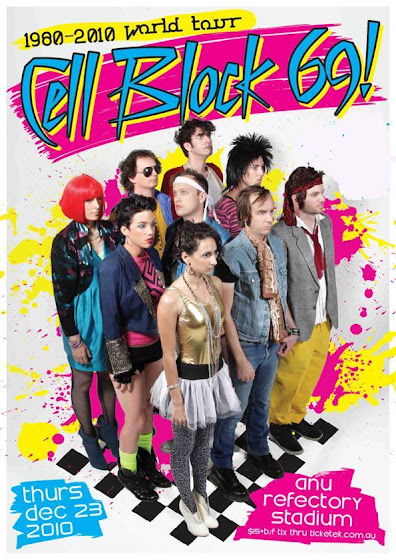 Leaping vibrantly from the Rock flames of their recent sizzling performance for the grand Roller Derby showdown at Bruce’s Stadium, Cell Block 69 return to the ANU Bar and Stadium as part of their current 1980-2010 world “Annual Last Show Ever” (TM) tour.

This news comes despite previous announcements from Duanne Le Corey Michaels that last year’s show was to be the final show ever! Cell Block 69 have reformed. Again! Canberrian audiences will once again be lucky to catch a live glimpse of a rare Cell Block 69 performance.

“We love Canberry” exclaims Cell Block 69’s lead and rhythm synth player Korey (the artist formerly known as Corey). “It welled up great sorrow in our caring hearts of Rock to hear about the recent floods caused by the majestic Sullivan’s river breaking its banks and wreaking devastation on inner north Canberrian life.

It felt only right to return to Canberry and perform a Rock benefit concert for the good of all. A concert where Canberrians would unite as one and benefit by rediscovering the total awesomeness of Cell Block 69’s Rock power, and where we would benefit financially from your caring donations made at Ticketek or at the doors on the night of our show”.

Also appearing as part of this Rock spectacular are:

To get closer to Cell Block 69, visit them on facebook

Ollie Skylark - 12 hours ago
aren't all cities planned to some extent? What is so special about Canberra planning? How is it different from other capital... View
News 3

@The_RiotACT @The_RiotACT
Sounds from the Suburbs, indie pop and Romantic Notions - check out what's on in #Canberra this week with our #GigGuide https://t.co/Q17cR5CkAy (6 hours ago)

@The_RiotACT @The_RiotACT
As the art world begins to rear its head again after COVID-19, exhibitions are back on. Catch Belco Arts' latest exhibition featuring two young artists https://t.co/j5T4N9j2Qj (7 hours ago)