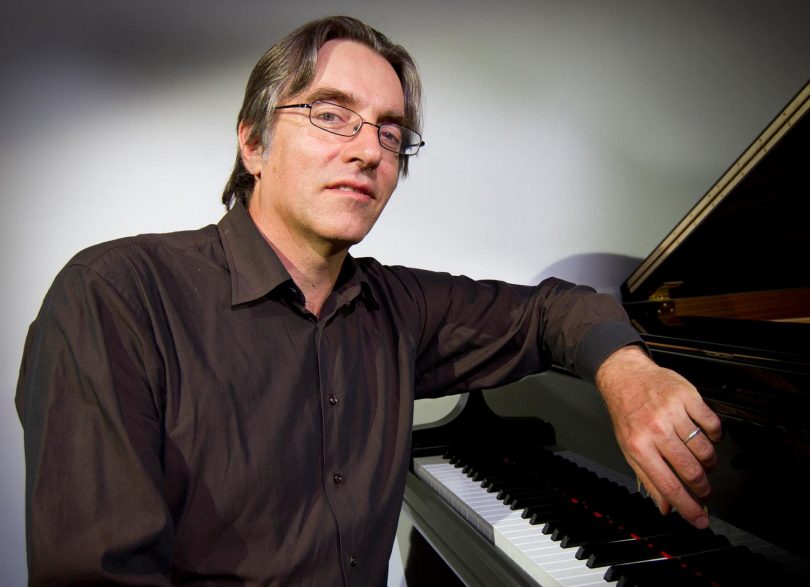 Michael Dooley is no stranger to Canberra audiences, but in 2018 he has – for the first time – delved into composing for the emerging genre of the wind ensemble.

As a prolific composer who has produced hundreds of pieces for TV, films, classical recitals and beyond, Michael is a jewel in Canberra’s musical crown. His most recent projects have spanned Big Band, Jazz Duo and Classical Piano, crossing genres with ease and showing ingenuity and impressive mastery of orchestration. Michael studied composition at the Sydney Conservatorium before traveling extensively, thus sculpting many of the influences that are often heard in his music.

Winds of Hope (2018) is no exception. In 2017, Nick Pearson (Canberran, owner/director of Canberra Music Tuition, and long-time supporter of local live music) approached Michael about commissioning a work that would commemorate a significant birthday of his wife Katarina, whilst also championing his passions of live music and local performers. Nick has been involved in Canberra’s music scene for decades, after graduating from the Canberra School of Music in the 80’s and going on to found Canberra Music Tuition more than 20 years ago. Winds of Hope was commissioned to commemorate Katarina’s journey from Belgrade, to building and sustaining a prosperous family life in Canberra. At Katarina’s birthday in 2018 she was presented with the score to Winds of Hope.

The music tells the story of change, and hope born of struggle. It is a story that has taken place in the Balkan countries and continues to take place in the Middle East. The piece draws on influences from the composer’s time living in Jordan and Lebanon, and also listening to the infectious and energetic sounds of Balkan music. Beginning with a haunting melody on bass flute, a hypnotic rhythmic theme takes over that could belong to the Balkans or the Levant. Struggle and conflict follow, finally giving way to a moving lament and ‘Hymn for the Fallen’. The piece finishes with a triumphant theme of hope as a symbol of the courageous rebuilding of lives.

HiddenDragon - 7 hours ago
Much of the progressive agenda being pursued by the ACT government is fairly standard stuff - not just the ideas, but the arg... View
Ray Polglaze - 14 hours ago
Martyn Tweedie, And so what would your view be of the Federal Labor Party in December 1968? What would the evidence show? By... View
Martyn Tweedie - 15 hours ago
Ray Polglaze my sincerest apologies. "Re-elected" then. View
Food & Wine 19