'Charlie' the helicopter lives to fly another day A Bell 412 helicopter, known as ‘Charlie’, purchased in 1981 by the National Safety Council of Australia (NSC), and the founding aircraft for the iconic SnowyHydro Southcare Rescue Service, has been repurposed to provide a vital aerial firefighting service helping to improve the emergency response available to the region.

This has been made possible through a sponsorship by local insurance business Austbrokers Canberra. Charlie will join the fleet at Canberra Helicopters.

Rolleston brothers, Les and Glen, who are the owners and operators of Canberra Helicopters, witnessed Charlie’s firefighting skills firsthand during the 2003 Canberra bushfires disaster and pledged to return the aircraft to the bush capital to resume service.

Far from an 80’s prodigy, Canberra Helicopters ordered a full refurbishment and upgrade of the aircraft, bringing Charlie into the 21st century with performance improvements, interior fit-out, and the addition of a 1400 litre firefighting tank.

According to Les Rolleston, the project’s purpose is all about giving back to the community.

“Charlie is a true icon in the Canberra community and I believe this aircraft is important to this city’s past and future,” Charlie said.

Greg Johnston, Managing Director of Austbrokers Canberra is honoured to be able to support this local initiative.

“Our insurance brokage aims to safeguard our community and this sponsorship is yet another way in which we can protect our bush capital,” Greg said.

“Insurance is typically about protecting homes and businesses from loss after disasters happen. By being able to sponsor Charlie, we have the chance to help in times of disaster, too.” 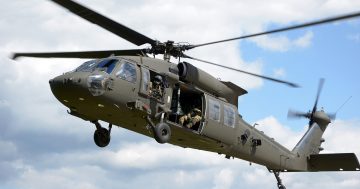