I love Turkish food. All of it. Whether it’s Turkish bread smothered in hummus or beetroot dip (or both!), kebabs, pide, baklava, or even a bottle of sparkling Gazoz, I will be keen at any time of the day. For those who are wondering what Gazoz is, it’s a delicious beverage that’s basically made from the magical pool that unicorns and angels swim in. It looks like lemonade, tastes kind of like creaming soda, and is only lightly carbonated. Amazing.

Anyway, back to the point. Turkish food. I’d been to the Turkish Pide House in Woden a few times before for dinner over the last few years, I probably would have been there more often if it wasn’t for the Yarralumla Turkish Halal Pide House which is a bit closer to where I live. I was previously told that both these establishments are owned by the same family though, one brother owns the Yarralumla restaurant and another sibling owns the Woden restaurant I think. 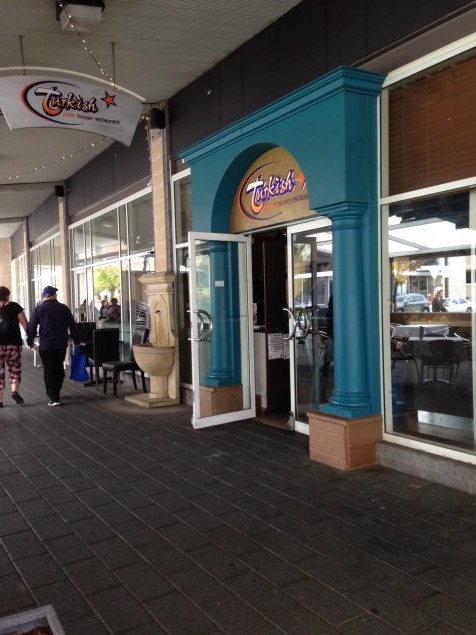 I took myself off to Woden this week for lunch as I’d seen its lunch box specials advertised. This restaurant is part of Westfield located in the outdoor strip of eateries right next door to the Coles and Woolworths entrance of the shopping centre. I arrived around 1.00pm and there were about six people waiting for takeaway orders and the actual restaurant itself was probably one-third full which isn’t bad for a Monday lunch time. The lunch box options are takeaway only and include over ten options, split into several categories that cater to everyone’s tastes: low carb, healthy, tasty, and vegetarian. I probably should have gone with a healthy option but instead favoured my tastebuds over my waistline and ordered the chicken skewer option from the tasty menu. 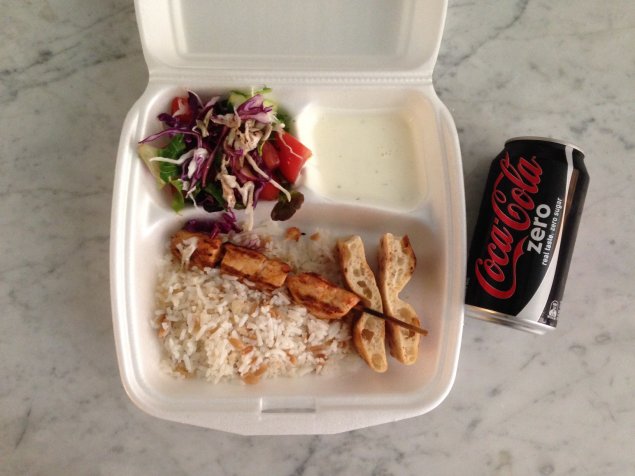 About eight minutes later it was ready. I was a bit suprised when the employee passed my order to me – it was in a HUGE styrofoam box, I was expecting a plastic takeaway box. The actual meal was split into three components in the box: salad (regular garden salad with a splash of balsamic), sauce (garlic yoghurt with a bit of spice to it), and the biggest section had rice, a chicken skewer, and two pieces of Turkish bread. The meal also came with a can of drink. 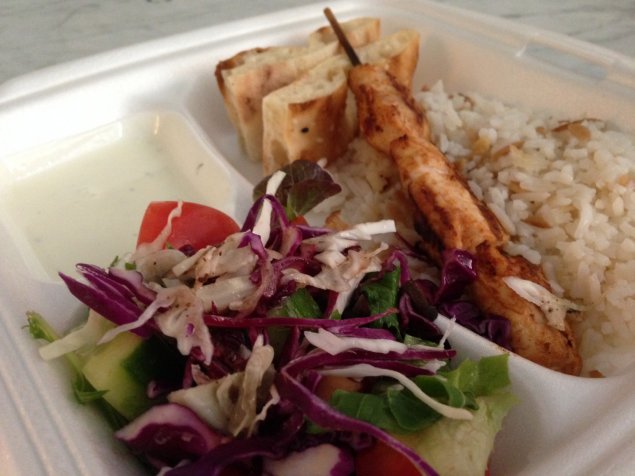 It was really delicious. The salad was fresh and crisp and the chicken was cooked perfectly with amazing seasoning. It was a good balance overall and it filled me up, but I suspect some people might be a bit sad that there is only one chicken skewer included. Maybe not the place to visit if you’re after a big protein hit.

The lunch box special (including drink) cost just $11.50. Turkish Pide House also has a rewards system where you redeem one free lunch box for every ten purchased.

Public servants seem to start lunch at 11.30am.

That’s a lie! They’re still at morning coffee then.

Thanks for the inside information.
I stand corrected, again.

The food at Turkish Pide House in Woden is quite good (I’m a fan of Gazoz too), but what is the deal with the surly staff? The cooks and waiters often argue with each other in full view of diners, and in my many years of patronage I’ve never been greeted with a smile. I have no idea what they are always so cranky about, but I prefer to takeaway from Turkish Pide House because asking for a table feels like a terrible imposition.

Public servants seem to start lunch at 11.30am.

That’s a lie! They’re still at morning coffee then.

I am a public servant who worked on Corinna St for years and the Turkish Pide House is one of the best priced lunches in Woden. I get the zucchini balls as my Lunchbox and it is in my opinion one of the best valued options they have.
If you are having a work lunch or the like, the service is fast, they often bring out extra plates of bread and dip or an extra pizza and it always tastes good.

This advice must be gospel as public servants know where all the lunch bargains are.
I have given up going to the Woden Tradies for the advertised cheap lunches because the queues of people with name tags are far too long. Public servants seem to start lunch at 11.30am.

I am a public servant who worked on Corinna St for years and the Turkish Pide House is one of the best priced lunches in Woden. I get the zucchini balls as my Lunchbox and it is in my opinion one of the best valued options they have.
If you are having a work lunch or the like, the service is fast, they often bring out extra plates of bread and dip or an extra pizza and it always tastes good.

If you want a really good value feed from Turkish Pide House (one of my favourite Friday night takeaway places), get the mini feast for two for $36. It easily stretches to 3-4 people and comes with a pide, 2 x zucchini balls, 2 x meatballs, turkish bread, dips, salad and a drink. You’ll be eating leftovers for days.

Lorna Towers - 15 minutes ago
You couldn't afford all the meat you get at a real Brazilian BBQ. View
Jodie Sharples - 4 hours ago
Julie Warren this answers our questions from yesterday View
Amy Stewart - 13 hours ago
Mark Turner this is what we drove past… View
Opinion 17

Julie Macklin - 16 minutes ago
Dingo Dom Shanahan No, the bus interchange needs to be better incorporated into the centre of the city, not removed. More peo... View
Richard Orchard - 45 minutes ago
Retail space is always troublesome to rent out- it’s either that landlords want rents and leases, with personal guarantees,... View
chewy14 - 4 hours ago
JC, $60million a year for one stage of light rail that services a tiny minority of the population. With the government commit... View
News 63

@The_RiotACT @The_RiotACT
@CSIRO has proposed a new National Collections building to be constructed at Black Mountain Science and Innovation Park in Canberra at a cost of $70m https://t.co/74MuQPOFXA (35 minutes ago)

@The_RiotACT @The_RiotACT
Messages of condolence are flooding in for the family and friends of a Canberra man killed while watching the Finke Desert Race near Alice Springs on Monday https://t.co/sDzPaNDQvg (55 minutes ago)