Chris Steel to be eighth Minister in Barr Government 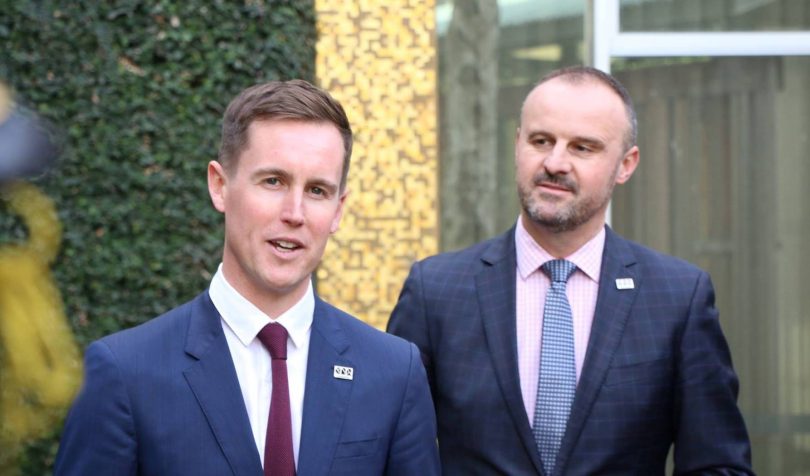 Labor MLA for Murrumbidgee Chris Steel will become the eighth Minister for the ACT Government.

Chief Minister Andrew Barr, who announced on Tuesday that a growing ACT needed an extra minister, said Mr Steel was the only nominee for the position.

His portfolios will be announced in a Cabinet reshuffle on Friday (24 August).

“Mr Steel has lived in Woden and Kambah for over 25 years and is a strong advocate for his electorate of Murrumbidgee in the ACT Legislative Assembly. I welcome Mr Steel to the Ministry and I look forward to working with him on the Government’s plan for a connected, inclusive and progressive city,” Mr Barr said.

Mr Steel said he would be another strong voice for the Southside in the Cabinet and for all Canberrans.

“I am grateful to my caucus colleagues for their support. We have a strong and stable Labor team in the ACT Assembly and I look forward to making a contribution in Cabinet and working with them to deliver better services for our growing city,” he said.

“As a Member for Murrumbidgee, I have spent the last two years talking to residents and community groups on the Southside, supporting over a thousand of my constituents directly with their issues since being elected.

“Regardless of my election to the Ministry today, I intend to maintain my regular mobile offices at local shops and my other community engagement activities in my electorate.

“I am looking forward to making a contribution in Cabinet across many areas – including the areas that I advocated for as a backbencher – the regeneration of Woden Town Centre and our local shopping centres, delivering better local health care services (including a new nurse-led walk-in centre for Weston Creek region), even better city services for our suburbs and the infrastructure that is needed as Molonglo continues to grow.”

Mr Steel, 32, holds law and arts degrees from the ANU and has been a policy adviser to several federal Labor MPs and ACT MLAs.

Before being elected to the Legislative Assembly in 2016, he was Policy and Research Manager at Early Childhood Australia.

In the Assembly, Mr Steel sits on several committees, chairing the Health, Ageing and Community Services committee, and is the caucus secretary.

He lists his interests as football (soccer), education policy, politics, reading, and gaming.

Another Minister for what??. Another sign of a Government with a major spending problem. My rates went up by over $400 this year to $5,600!! This is out of control and makes me feel stressed wondering where I am going to get the money to pay this unfair and ridiculous bill! I note that the Chief Minister tried to justify the extra position by comparing the ACT with the Northern Territory and the State of Tasmania. These states have multiple cities and towns, huge land masses with massive social and geographical issues. That comparison is ridiculous. This Government needs to live within our means!

You know that you can avoid that rates bill by selling your property that’s well over $1million in value?

Then you’ll have plenty of cash to pay your bills.

Thanks for the financial advice but of course we can all avoid the ridiculous and unfair Canberra rates by selling up and moving to another state. But is that the Canberra we want? Where people are forced to sell and move because our council rates are unaffordable? BTW the article is about additional Ministers. My point is that, as usual the rate payers has to fork out extra for more unnecessary expenditure – what benefit will we see from another Minister except that the other seven will have less work to do? This government has a serious spending problem.

How much is this going to cost ACT rate payers? I’m not seeing value for money from this Government.

Julie Maynard - 11 minutes ago
Daniel Duncan rates have actually gone down. View
Rainer Busacker - 13 minutes ago
Andrew "Gunna Do" and his colleagues making promises that they could have carried out years ago with the Green Bins. View
Joshua Nash - 2 hours ago
i see the liberals are already recycling this policy View
Food & Wine 9

Verity Leeper - 3 hours ago
Lee is this what Leon is involved with? View
Andy Sullivan - 4 hours ago
Does this mean we could finally have a red bull 400 race in summer 😍 View
Community 24

Growing ACT to get an eighth Minister

Chris Steel moving forward from the worst day of his life

@The_RiotACT @The_RiotACT
Penrith coach Ivan Cleary's been handed a $20,000 fine for questioning the integrity of referee Gerard Sutton in his side's 28-12 win over the @RaidersCanberra https://t.co/YXBr6BVHUI (34 minutes ago)

@The_RiotACT @The_RiotACT
ACT Labor has pledged to create a city-wide food waste collection service which will reduce carbon emissions and create 200 jobs. The scheme will be rolled out in 2023 to allow time for the construction of the compost facility https://t.co/BuO9ZGr7rm (3 hours ago)