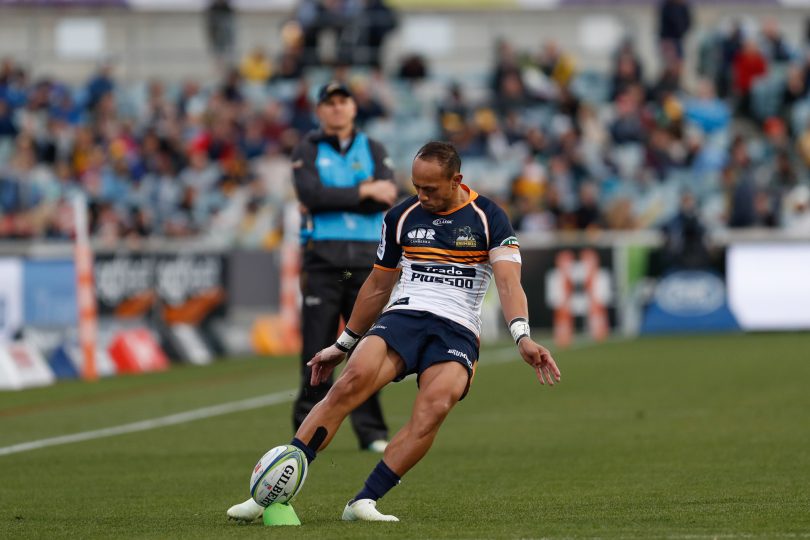 Lealiifano will play in the Japanese Top League at the end of the Super Rugby season. Photo: Photox – Canberra Photography Services.

Plus500 Brumbies playmaker Christian Lealiifano will join Japanse side Toyota Shokki at the end of the Brumbies’ campaign after signing a deal with the club this week.

Lealiifano will move to Japan at the conclusion of the Super Rugby season and will play with Toyota Shokki until the culmination of their season, a move which the Brumbies were happy to assist with.

Lealiifano, who has racked up over 800 points with the Brumbies, will play in the 2018 Japanese Top League two years after he was set to make his debut in Japan before he was diagnosed with leukaemia.

The Plus500 Brumbies co-captain enjoyed a similar spell with Ulster Rugby in the PRO14 last season and said he was looking forward to the unique experience of playing in Japan.

“This is something that I have wanted to do for some time and had to postpone due to my illness,” Lealiifano said.

“This is a fantastic opportunity to play in a different environment and a different culture and it’s something that appeals to me.

“I am excited about the prospect of playing for Toyota Shokki. Before then, however, my focus will be on finishing the season strongly at the Brumbies and helping to continue our recent good form.”

Plus500 Brumbies CEO Michael Thomson said the Brumbies are supportive of Lealiifano playing in Japan.

“Christian’s form has continued to improve as the season has progressed culminating in the Brumbies two strong performances in our most recent games.

“We appreciate that he is keen to experience another culture and the Japanese Top League timing affords him that opportunity this year. We wish him luck with his endeavours.”

The Plus500 Brumbies are next in action on 30 June when they welcome the Hurricanes from New Zealand to GIO Stadium in Canberra with a 19:45 kick-off.

@the_riotact @The_RiotACT
CEO of @RaidersCanberra, Don Furner, will embark on a 145km walk of the Canberra Centenary Trail in early November to raise money for @Menslink, and he'll likely be joined by club coach Ricky Stuart https://t.co/MR8N6Sq2Nj (52 minutes ago)