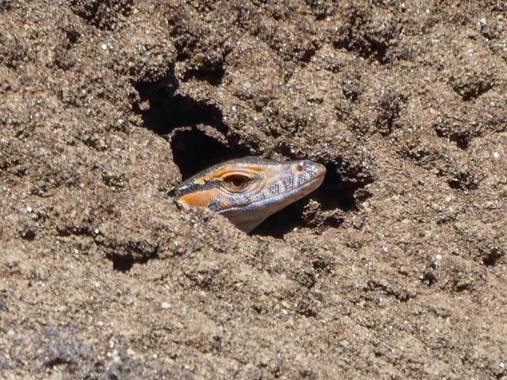 A hatchling emerges from a termite mound in Namadgi National Park. Photos: Supplied.

Some may say citizen scientists monitoring threatened Rosenberg’s goannas in Namadgi National Park got lucky on their first day out on Monday.

But it was the sweat of last summer’s work that laid the foundation for their observing the exciting emergence of hatchlings from a termite mound in a monitoring station in the Park.

Ecologist Dr Don Fletcher said that last year the National Parks Association supported a groundbreaking pilot study in which two male goannas had GPS tracking packs attached. One was tracked to a location where the team found two termite mounds that were being guarded by female goannas and deduced there must be eggs in them. One of these produced the hatchlings.

A camera on the other mound showed a goanna paint-marked by Dr Fletcher last summer visiting occasionally as if checking to see if her babies had hatched.

This year the study, which Dr Fletcher believes is the first time GPS tracking devices have been used on goannas, has been expanded with an environment grant from ACT Government and more support from the National Parks Association. 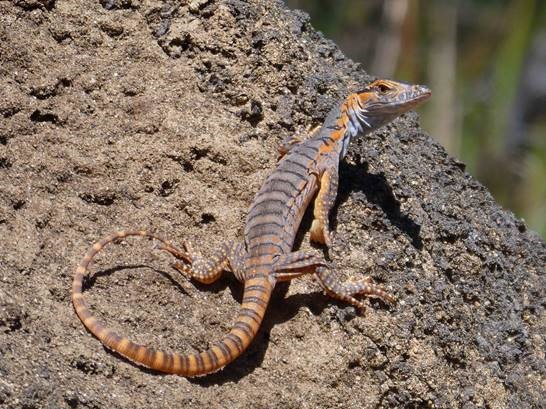 A baby Rosenberg’s goanna on the mound after digging out.

He said Rosenberg’s goannas were important ecologically as one of the bigger predators in our local environment.

This summer the project has eight GPS packs and baited traps which will be set to capture potential carriers. About 18 or so volunteers will spend a day in the Park emptying traps, taking specimen’s photos and selecting male goannas big enough to carry the packs. Next time eight females will be selected.

Dr Fletcher said an increase in the goanna population in that pocket of Namadgi had scientists excited, with speculation that the wild dog control program may have reduced predation from their main enemy, feral foxes.

“If we can actually show that that’s really the reason, then it might be that the predator control might be extended to some of the other parks where they occur. It looks like you can boost their numbers judging by what’s happened in Namadgi,” he said. 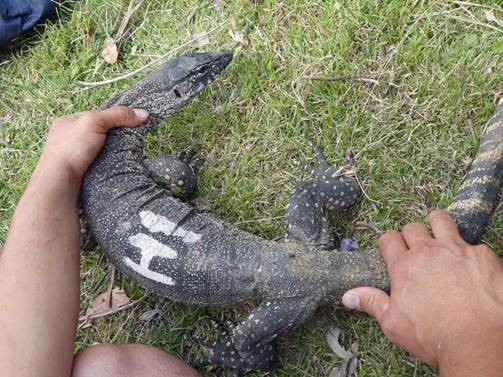 An adult goanna that Dr Fletcher has marked for identification.

Dr Fletcher said the team was also hoping to see whether the extraordinary roaming behaviour of the goannas tracked last year was typical.

“They’re only little animals, with legs only a few centimetres long but one of them travelled to a point 12 kilometres away as the crow flies and back again, and it really looked like it knew where it was going,” he said.

“If they really do this sort of thing often, it is another impressive feature of this species of the population but one that makes it more difficult to conserve them in small reserves, and maybe it’s something to do with particular resources and the research will tell us what those resources are.

“Maybe they’re looking for the termite mounds because that’s where the females will be at that time of the year when they lay their eggs.”

And it’s not just any old termite mound but a particular species.

The females lay eggs in summer and the termites maintain a high enough temperature for the eggs to develop during the winter, only to become food for the young goannas when they hatch in the spring.

“It’s a pretty rare sighting. You can talk to naturalists and not many have seen these hatchlings coming out,” Dr Fletcher said.