Classic Australian art from Casino Canberra going to auction: own a piece of Canberra history 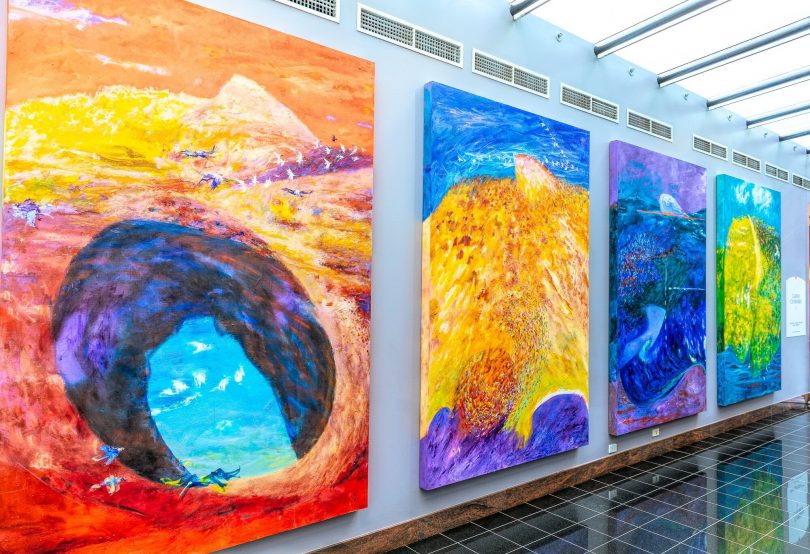 An extensive range of classic Australian art which has been displayed in the Casino Canberra since the early 1990s will go to auction this month. Photos: ALLBIDS.

In a rare opportunity to own a piece of Canberra’s history, a range of classic and iconic Australian artworks from Casino Canberra will be auctioned off and sold to the highest bidders over the coming weeks in preparation for the casino to update and refresh its collection.

Following the opening of the original temporary casino at the National Convention Centre in 1992, the Casino Canberra that we know today, opened for business in 1994 with former Prime Minister Bob Hawke and the ACT Chief Minister Rosemary Follett among the list of distinguished guests that attended the large opening party, where Bob Hawke also famously claimed the title of winner of the golden roulette ball which was used for the first spin of the roulette wheel in the temporary casino.

The collection of artwork which has been displayed in the casino and its foyers since the early 1990s will be auctioned off to the highest bidders this month on Canberra’s-own auction site ALLBIDS. The artwork which was originally purchased from local sources with an emphasis on Australian history, wildlife and culture, includes various major and commissioned pieces that represent once-in-a-lifetime purchases.

One piece of particular note is the commissioned “Seasons” set of four 2 x 1.9 meter wide paintings which have been displayed at the casino for many years. Composed by Frank Hodkinson (1919-2001), a celebrated Australian artist following WWII who exhibited extensively in both Australia and Europe in the 1960s including in the Tate Gallery ‘Colonial and Contemporary Art’ exhibition and ‘Contemporary Australian Painting’ at the Whitechapel Gallery, these beautiful paintings would make for a great investment and addition to a collection. 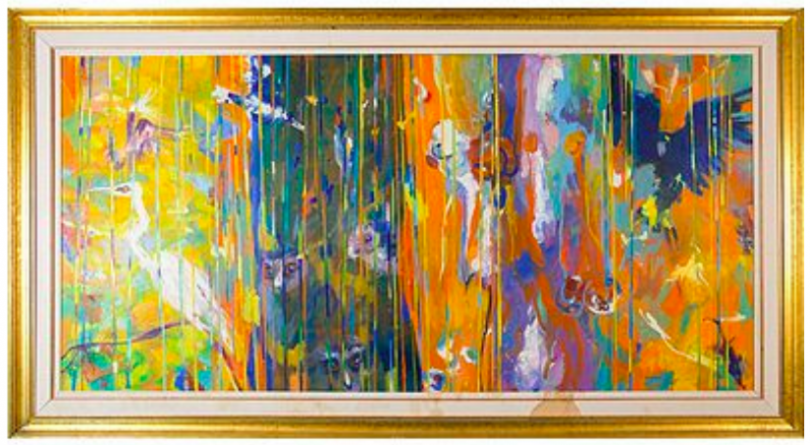 Other major pieces that are expected to generate significant interest include the collection provided by Peter Griffen (b. 1948), which draws inspiration from a unique combination of the classical painting of the Renaissance, the serendipity of abstract expressionism, and the natural landscape imagery of both Australian and international Indigenous art.

“High Roller” oil and collage on canvas by Peter Griffen.

In total, the collection includes more than 75 pieces from a range of local artists with varying price points, with some pieces anticipated to sell for as little as $50, while others are expected to fetch over $20,000.

While many of the pieces included in the sale are in keeping with the 1990s design, the superior quality pieces possess a timeless appeal, offering buyers a rare opportunity to own a unique piece of Canberra’s cultural history.

You can view the complete catalogue of artworks included in the sale on the ALLBIDS website, with bidding set to conclude on 25 and 26 July.

Taliesin Maryrose Bushnell - 12 minutes ago
Bailey Davis as soon as I can cross the border we’re on!!! View
Michael Schaefer - 27 minutes ago
Ali Schaef - perhaps a QLD trip could soon be on the cards?? View
Karina WL - 37 minutes ago
Jana Nicholson omg keen View
Property 3

Patrick Harrington - 34 minutes ago
Dannii Harrington this one? View
Susan Anderson - 1 hour ago
Fiona maybe I could do this one! View
Julien Lefebvre - 2 hours ago
Rod Irvine your house mate View
News 57

Mac John - 2 hours ago
Election matters: Challenge to Candidates: How about limiting the number of terms to two and get fresh (first time) candidate... View
Colin Vivian - 11 hours ago
Anyone over 50. Letting contracts to remove trees in Parkland before public consultation was held then announcing works six m... View
Robyn Holder - 14 hours ago
Steve Wood and there you go with the rightwing thinking of how to disenfranchise people. Congratulations. View
Community 1

George Watling - 11 hours ago
Bill Gemmell Very witty 🙂. A chance find of the yellow stuff would be good for the current government it would save them a... View
HiddenDragon - 14 hours ago
The 2019-20 Budget Review released in February showed net Territory debt of $5bn by the end of that financial year - so even... View
Julie Macklin - 14 hours ago
Colin Vivian, The bridge replacement was a suggestion from the Federal government, not local. Now it's not to be replaced, bu... View
Community 12

SP Brogues - 13 hours ago
All that landfill View
Property 14

Shaun Claypole - 16 hours ago
Jessica Botterill I just saw this We are in... View
News 1

A milestone mixed-use residential development has been proposed for the commercial area of Phillip, potentially paving the way for a...
News 37

Canberrans will soon be able to fly direct to the holiday destinations of the Sunshine Coast and Cairns, and direct...

The Spring Equinox passed this week and the days are now longer than the nights, but a polar blast of...
ACT Election 58

One day a week of free early learning for three-year-olds and 400 more teachers and support staff for ACT public...
News 37

Tips for buying and selling jewellery at auction

Want to be the next owner of the Rollonin cafe and a piece of history at Bowning?

@The_RiotACT @The_RiotACT
Canberra's much-loved GG's Flowers has to move and needs a new home for their blooming social enterprise. Can you help them find a new place to blossom? https://t.co/oH67IWg4dc (12 hours ago)