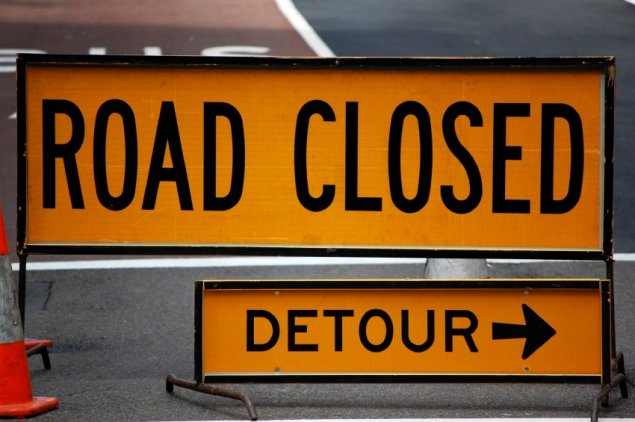 Road closures this weekend in the city.

Despite stage one of Canberra’s light rail being operational since 20 April, the ACT Government is still closing off intersections to continue work along the route, ten weeks after its official launch.

Starting from 8 pm on Friday (5 July) to 6 am Monday morning (8 July), intersections along the Federal Highway and Northbourne Avenue will be closed while road works take place.

There will also be lane restrictions to northbound and southbound traffic near the intersection.

Transport Canberra bus services will also be affected during this closure, with bus stop 3042 on City West Alinga Street and stop 4530 on Marcus Clarke Street before Rimmer Street closed this weekend.

For bus stops 3042, customers are asked to proceed to the alternative platforms in the City Interchange while bus stop 4530 patrons can use the temporary alternative bus stop on Rimmer Street opposite bus stop 4529. 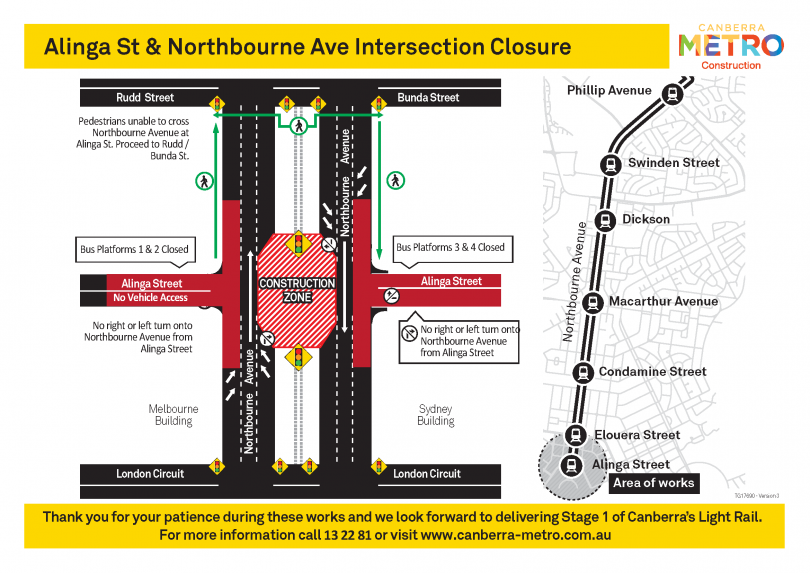 There will also be lane restrictions to northbound and southbound traffic near the intersection. 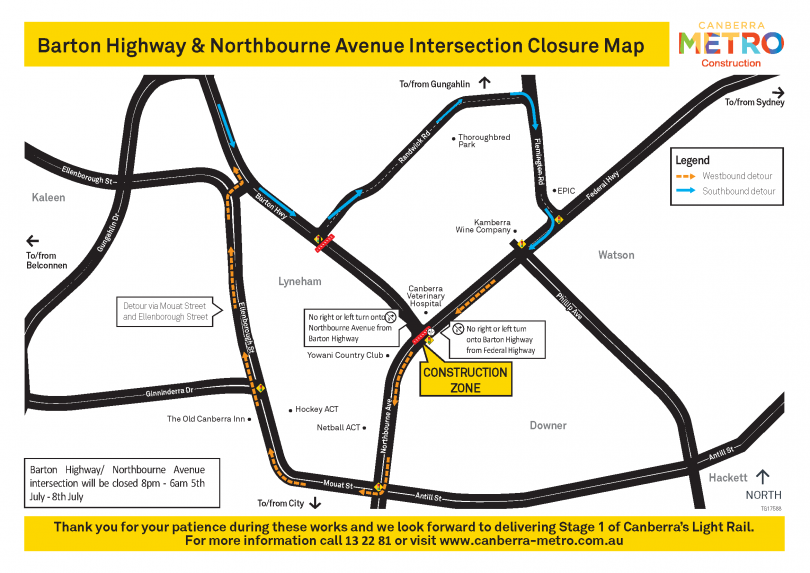 In a statement, Transport Canberra and City Services encouraged affected motorists to follow the detours and to allow additional travel time this weekend.

“Diversions will be in place to help drivers navigate the upcoming intersection closures as light rail stage one works continue to progress along the Federal Highway and Northbourne Avenue,” the statement read.

“Canberra Metro is working hard to complete construction and to ensure these closures cause as little disruption as possible.

“Detours, traffic control and pedestrian management will be in place, and signage and personnel will be highly visible throughout the works. Motorists are encouraged to follow the detours and allow additional travel time over the affected weekends.

“Transport Canberra thanks the public for their continued understanding and patience during these interruptions.”

It’s mayhem in the city this morning with only one lane open in each direction between Barry Drive and Alinga Street. Also, the lack of any traffic supervisors is creating gridlock across the sacred light rail tracks – what “personnel”?

So the cost keeps rising……

Don’t thank me for my patience, I am not offering my patience. Sick to death of the roads being constantly messed up and lanes being closed (usually for no reason at all). Hurry up and finish this mess.

I understood that Canberra Metro had been paid in full under the contract terms so, who is paying for this “continuing work”?

Peter Bucke - 6 minutes ago
Has it been booked for parking on the nature strip ? View
Bob Foster - 3 hours ago
How long till it gets graffitied??? View
Derek Simpson - 12 hours ago
Steve Ager i think she who must be obeyed would have a differing opinion 😁😁 View
News 25

Amanda Salske - 12 minutes ago
The parents should be given the tests to do at home with their children. I don't feel comfortable having teachers touching my... View
Amanda Salske - 15 minutes ago
No one will be testing my children apart from myself or a doctor. View
Emjay Barker - 34 minutes ago
Daniel Duncan that’s a great idea 🤣 View
News 44

Capital Retro - 31 minutes ago
I know that JC but it wasn't in the link I referred to. The "arms length" ownership is along the same lines as the Canberra L... View
Capital Retro - 35 minutes ago
Never heard of this dude. I note he refers to CGS as a "business" too. How come no one is criticizing the Federal government... View
doomattheend - 11 hours ago
Good to see the Greens MLA attacking a private school for a federal issue rather than keeping the labour party in check. Of c... View
News 316

Kalo Arepo - 1 hour ago
Not only do gum trees fall over at the drop of a hat but they are also potential bombs ready to explode when a bush fire occu... View
Public Sector 14

Mark Johnson - 11 hours ago
Belinda Makrides don’t think it would make a difference. Toyota have a pretty good rep no matter where they are made. The H... View
Mark Wallin - 12 hours ago
A car you operate rather than drive. View
Opinion 43

HiddenDragon - 11 hours ago
Boiled down, that sounds like an argument for more people on the public payroll in Canberra - good luck with that when the Au... View
Monda Scoltock - 12 hours ago
Alexandra Hunter - no doubt! View
Food & Wine 8

@the_riotact @The_RiotACT
Peter Walker's overcome some serious battles over the past 20 years, but he says he's ready to take on the #challenge as the new mayor of #Goulburn https://t.co/OCLVo6yk2h (34 minutes ago)