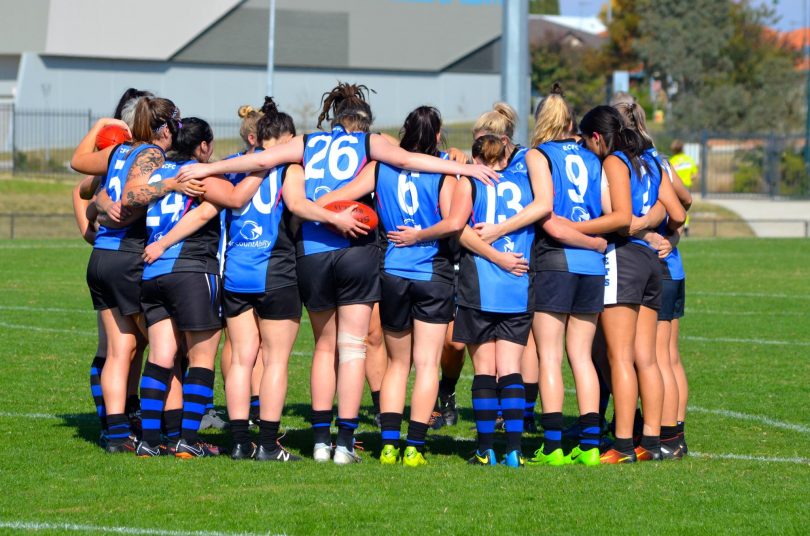 Gungahlin Jets first-grade women’s side have not scored a single point this season. Photo: Supplied.

Gungahlin Jets first-grade women’s coach has called for the league to find a way to make sure players are not moving between rival clubs after his side has failed to affect the scoreboard this season.

Tim Caesar, who is in his first year coaching the women’s first-grade side, admits he expected his side to struggle this season after the club saw an exodus of players during the offseason, with players moving to rival clubs or leaving the game.

As a result, the Jets have lost all four of their games in the 2019 AFL Canberra season, conceding 425 points without scoring one themselves.

Caesar said the club was not measuring success on the scoreboard and were focused on rebuilding the women’s side this season but implored the league to stop rivals poaching experienced players.

“It is best for the competition if we have six evenly matched teams. If there is one dominant team that smashes everyone every week, it doesn’t improve the game,” Caesar told Region Media.

“I want to see six even teams but how the league does that is a real challenge, particularly with women’s footy. We don’t have the player base like the men’s game does.

“There isn’t a plethora of female players that have had the footy in their hands for the past 15 years.

“It would be awful for any club to develop a strong side and then have the league reach in and penalise them but at the same time we need to promote players staying at their clubs.”

The club has seen a glut of players make their debut in first-grade this season, with many having little experience with the sport.

“We played a pre-season match this year and in our squad of 20 girls, we had 150 games experience,” Caesar said. “Compare that with one of the rising star teams that I coached last year, where we had 1812 games of experience across the squad.

“That puts it into perspective how new our group is to the game. It is going to take a little while to get things right.”

The head coach said he remained focused on encouraging his players to not walk away from the sport and to not let the scoreboard affect team morale.

“I have been absolutely open and clear with my messaging to the girls that we are in a phase of rebuilding this year and that will come with some losses,” he said.

“My role is to build the team environment and culture that we want, particularly with a group of mostly new players to the game. It is going to take some time and the club is aware of that and we are focusing on getting it right.

“We are not measuring our success on the scoreboard but we have other indicators to assess how well we are doing and that is what we are focusing on.

“The girls have bought into that ethos and they know the scoreboard success will come.”

I have been to a couple of games so far this year. The Jets play until the final whistle and do not give up. Yes, the score board is not nice to see but they are a new team with lots to learn.

Jimbo Lambert - 19 minutes ago
So what was the justification for reducing the Barton Highway section near Gungahlin Drive from 100km/h to 80km/h? It's dual... View
Martin Ross - 1 hour ago
Steve Jones transport Canberra buses don’t have flashing lights. Only Qcity ones do. And the local private companies don’... View
Peter Ball - 5 hours ago
Gai Wil - So given that logic, a 5 kmh limit would be OK with you yeah? I mean, as you stated if you don’t speed (regardles... View
Property 30

Simone Moss - 1 hour ago
Sarah Moss,maybe you need some alpacas 🦙 View
Lucy Coote - 2 hours ago
Tom Gilbert uhhhhh I mean at least we wouldn’t have to mow the grass… View
Amanda Robyn - 2 hours ago
Suzanne Feeney. See. Alpacas is what you need. 😉 View
Sport 5

UPDATED 4 pm: As Friday draws nearer, the rules governing how our COVID-normal will look continue to be released. As expected,...
Sport 23

As the Canberra community maps out a phased return to competitive sport, a fascinating debate is happening behind the scenes....

@The_RiotACT @The_RiotACT
Sally Hopman reckons there's no need to #write yourself off if you are struggling with #computers. Just pick up the heaviest thing handy - ancient Remington #typewriters are always good - and take aim at the laptop https://t.co/5SoyRLLAhU (1 hour ago)