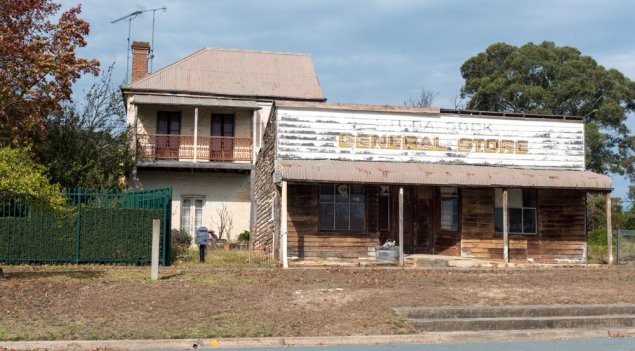 There will be some readers out there who remember well the terrors of driving between Sydney and Canberra before the freeways and motorways. It was not fun, it was bloody dangerous, it took ages and you had to stop once or twice to recover your sanity as much as to get some rest and something to eat.

The food options along the way were not brilliant.

But how things have changed. It is now possible to set out and while keeping to the speed limits to be in Sydney in under three hours.

Having such an easy drive presents stopping for a coffee and taking a break as a pleasant option rather than a necessity. And the choices as to where to stop have definitely been improving over the years.

We make this journey regularly. Mittagong would be the place we stop most often when travelling in either direction.

When travelling north I recommend not taking the road through Moss Vale and Bowral, but wait until you pass the exit to Berrima (another option, of course) and then take the direct turn off to Mittagong (and the Wombeyan Caves). This lands you right on the outskirts of the township. The exit back to the highway is then a couple of kilometres on the other side.

Once in Mittagong you have the option of turning left in the centre to take it easy by Lake Alexandra that has kids’ playthings, walks around the lake, toilets and picnic areas. 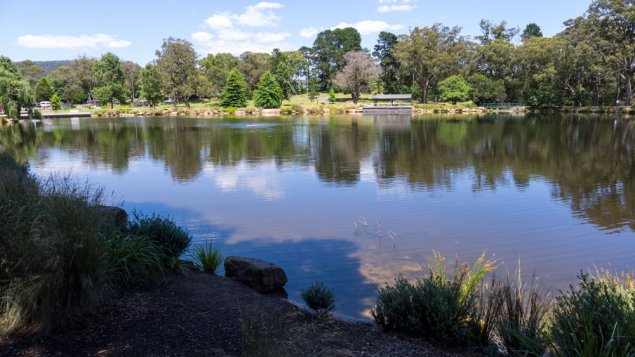 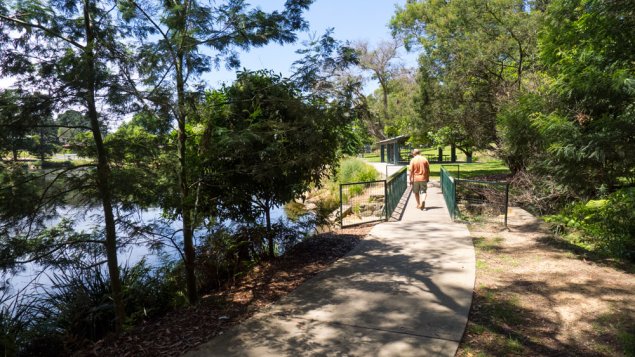 However, if coffee or a meal are your thing, there are several options. Here are a few. 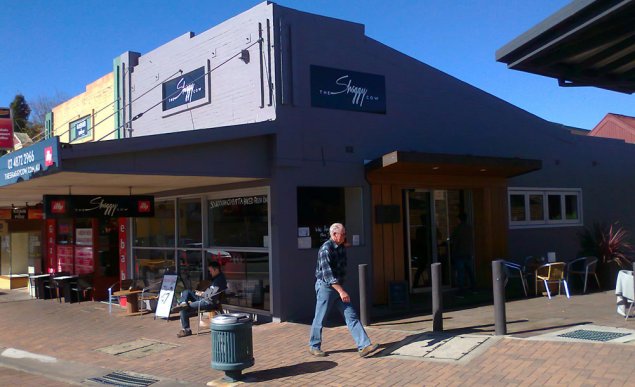 The Shaggy Cow (closed Tuesday) on the Old Bowral Road in the centre of town is the most popular and offers more than enough to please most people. The next along the street is the Station Coffee House, and then Brewsters Café. Across the road is the newly refurbished and now under new management Glass Café. All of these are good with each having its own characteristics – and all have good coffee.

A little off the main road and across the railway is the Sturt Contemporary Craft and Design Centre, which is well worth the visit, plus they have a good café attached.

Another place often ignored by people zooming down the highway is the small township of Marulan (north of Goulburn). 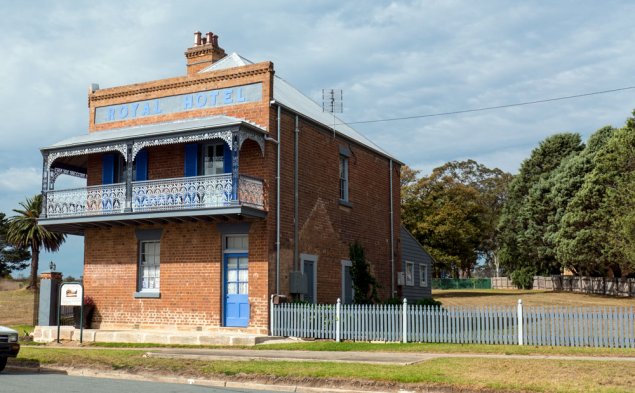 This was once far busier when it was on the old highway. There are several signs of its former life along the main street. Marulan now has its own very good contemporary café, the Meridian Café. This is definitely worth taking the time to stop for food and coffee. The Meridian Café is open Thursday to Monday from 8am to 3pm.

If you want a little distraction, drive around some of Marulan’s back streets. This town will not be getting the tidy town/landscape garden awards. But there is something going on there beneath the surface as you can see from some of the objects in the front yards. 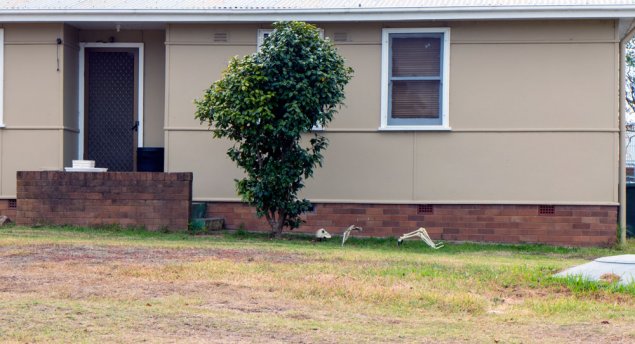 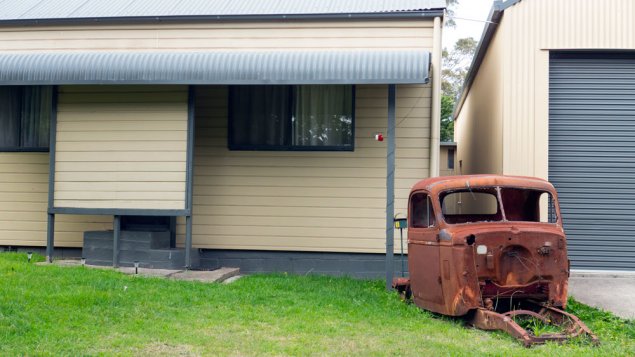 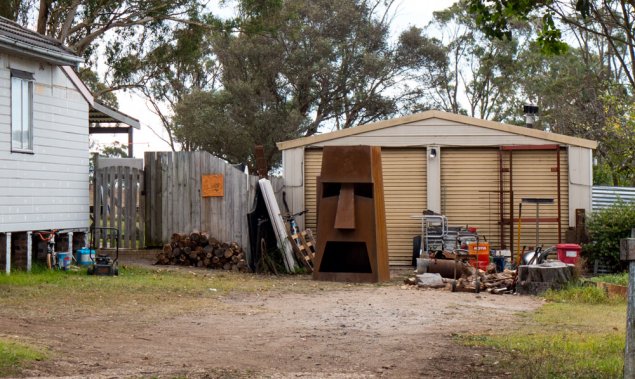 Then there is Goulburn.

To start with, the City Gallery (hidden behind the library) has the occasional exhibition that is very much worth a visit. And then to add to your visit, go to the centre of town and have lunch at the Roses Cafe on the south side of the main city park. Good coffee and food – no music to annoy you – and a busy and friendly atmosphere. Be warned, though; it may be large but it gets very crowded. 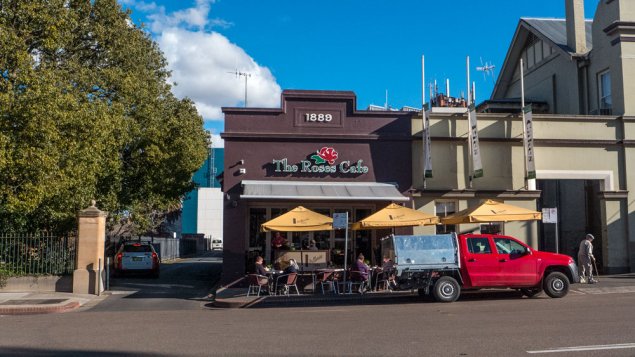 There are several other café options recommended and worth exploring in Berrima, Bowral, and Moss Vale. All of these towns have both well-established and new cafes that should be on your list for a visit.

As for Moss Vale, it was during one stop over there that we realised that there was a car dealer with the make of car we were looking for, at a good price. It is now parked in our driveway.

So there it is.

Driving between Sydney and Canberra offers many opportunities to not just drive for the sake of getting somewhere, but to also take the time to visit some of the towns along the way and to enjoy the occasional sights – and their offerings of food and coffee.

See you out there sometime.

For some music as you wonder what people are doing in those houses – listen to this.

The other thing worth stopping for – especially at the Marulan truck stop – is cheaper petrol than we poor Canberrans can normally get.

Sutton Forrest Winery accessible from the Maccas servo going north. Great espresso and Italian food served by Nick and Santini. Room for the kids to run around.

Well worth the sanity break.

Yes, I’ll second that! The proprietors are great conversationalists and the coffee superb.

Never again will I suffer that horrid McDonald’s “coffee” and the sickly smell of fatty food that pervades that fast food dirge.

Anyone remember Michels at Tahmoor? They used to have game to die for.

Sutton Forrest Winery accessible from the Maccas servo going north. Great espresso and Italian food served by Nick and Santini. Room for the kids to run around.

Well worth the sanity break.

All fairly expensive options or lengthy detours. We pack a thermos and a bit of fruit and swap drivers somewhere near Sutton Forest.

That’s my solution too (with a couple of egg & lettuce and ham and sweet mustard pickle sangers).
(I’ll bet someone asks what a thermos flask is.)

All fairly expensive options or lengthy detours. We pack a thermos and a bit of fruit and swap drivers somewhere near Sutton Forest.

Bollocks. If you are incapable of driving safely for 3 hours without a break, then don’t do it. But spare the melodramatic claims. Plenty of us can drive uninterrupted for 3 hours quite safely.

And also, back then, we weren’t a sooky-la-la country of coffee w$nkers, so a truck stop with some dimmies, bucket of chips and a can of Coke usually did the trick for most people.

Well, since we’ve become a “sook-la-la country of coffee w$nkers” and food appreciators, our life expectancy has increased. There are worse things to be than coffee snobs, and personally, I think it’s only a good thing that you can get great coffee and a nice feed at places other than the McDonald’s at Sutton Forest.

Berrima is great for coffee and food – along the main drag and down closer to the pub there are some great little spots, and Two Skinny Cooks have recently opened little shop that sells frozen foods, jams, relishes as well as coffee and some baked goods (including their stellar Portuguese tarts). There’s also Grandma’s Little Bakery closer to Canberra, and Bowral has a number of nice joints through the town. It adds variety to the trip, that you can try somewhere new pretty much every trip you make to Sydney. I noticed recently that a new cafe has opened in Collector as well!

“The food options along the way were not brilliant.”

More complaining from the OP, haha.

A burger with the lot from the Shell at the northern end of Mittagong, opposite the Golf Club, was THE highlight of the drive to Sydney, regardless of where you were driving from (which during my childhood included SA, VIC and Canberra).

And also, back then, we weren’t a sooky-la-la country of coffee wankers, so a truck stop with some dimmies, bucket of chips and a can of Coke usually did the trick for most people.

Dimmies , yeah, for a while… As me palate increased I leapt up to chiko rolls..

Oh, Marulan has never been the same since the failed Big Pavlova experiment. 😉

“The food options along the way were not brilliant.”

More complaining from the OP, haha.

A burger with the lot from the Shell at the northern end of Mittagong, opposite the Golf Club, was THE highlight of the drive to Sydney, regardless of where you were driving from (which during my childhood included SA, VIC and Canberra).

And also, back then, we weren’t a sooky-la-la country of coffee wankers, so a truck stop with some dimmies, bucket of chips and a can of Coke usually did the trick for most people.

I rarely stop on the Canberra-Sydney (or reverse) trip, and I have no particular deathwish.
But I do sympathise, it can get boring – good argument in favour of raising the speed limit on interstate highways.
An added bonus is that it would reduce the number of accidents, as it did in the Northern Territory.

We find Eling Forest Winery a pleasant place to stop. It’s about half-way and you need to take care crossing the Highway and exiting. The coffee’s not too bad and it’s far enough away from the highway to be isolated from the noise, but close enough for a reasonably short turnaround.

Stop at least once on the Csnberra–Sydney trip, to tear yourself away from the road hypnosis at least.