A rendering of the Coles proposal for the Dickson shops, from the DA.

Coles’ new development application for the Dickson shops car park is a significantly different proposal that attempts to meet the community concerns that saw its first effort overturned in the ACT Civil and Administrative Tribunal last year.

The Tribunal found that the original proposal did not meet requirements of site planning and urban design, and did not provide an efficient, safe and attractive urban environment, with an insufficient streetscape and poor landscaping. Nor did it provide sufficient traffic and pedestrian safety or a safe and attractive shared zone.

It also found that the proposal did not respect the urban setting of the heritage-registered Dickson Library and provide a sufficient buffer zone. Coles went to the Supreme Court but those proceedings have been adjourned.

This time around Coles is proposing a two to seven-storey mixed-use development with 140 residential units, the one supermarket and other ground floor retail and commercial tenancies, podium car park, and two levels of basement car parking. The previous office space has been taken out. 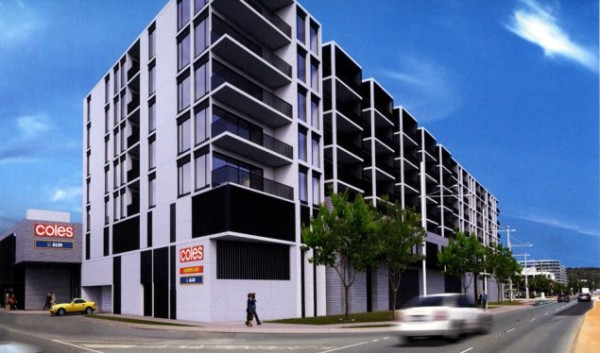 Coles’ original design for the site.

There is a also minimum 10 metre buffer between the building and the Library.

The DA says the design respects the gateway location of the site, presenting no blank walls and employing a diversity of building and landscape materials. Awnings and tree planting around the perimeter have been added for weather protection.

The perimeter itself provides a minimum four metre unobstructed pathway for pedestrians and cyclists. The DA says the retail and residential development will connect to existing networks and create a link to a new Dickson Square and surrounding existing retail via the pedestrian priority shared zone.

There are also outdoor weather protected and landscaped walkways between shops.

The Level 2 podium will be accessed from common entries and pathways, and a communal space will include a mixture of trees, shrubs and ground cover provided in raised planting beds; a timber deck and vine-clad pergola / alfresco entertainment area, a synthetic lawn and raised kitchen garden beds.

The proposal provides as agreed replacement car parking of 237 car spaces in addition to the parking required for the supermarket and shops, with 449 spaces in the basement and 206 on level 1. Out of the total of 655 spaces, 183 are for residents and 472 are commercial.

A number of changes have been to improve traffic flow, the retail exit ramp has been moved further away from the Library and out of the heritage buffer, and the shared zone has been maximised to increase active travel.

Dickson Residents Group convenor Jane Goffman said she was cautiously optimistic. “I’m confident that they’ve acted in good faith and that this new proposal is a far better and more people friendly one than the ones we fought in the ACAT,” she said.

It’s not at all aesthetically pleasing from the corner view, but glad changes occurred. No Aldi 😭 Totally perplexed by “heritage-registered Dickson Library”??

Sounds awesome! They need to start a supporters of the Coles development group. The current state of shopping precinct is joke. A new well structured development will offer so much more to the local community.

Perhaps this could be the height limit for Northbourne Ave as well? #CBR?

Thank god. It’s a deplorable place to shop at the moment.