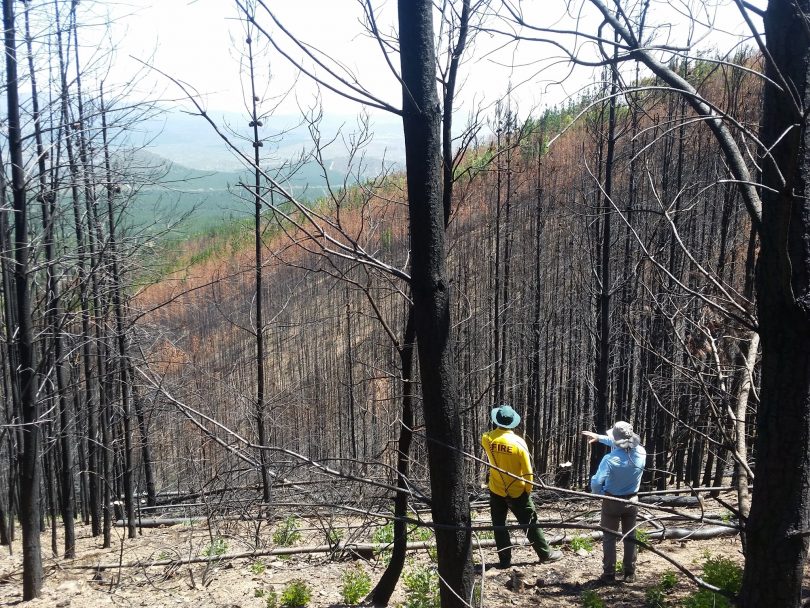 It will take around 20 years for the trees to grow back at Pierces Creek. Photo: Supplied.

When the news broke of an out-of-control bushfire at Pierces Creek last November, Canberrans were forced to watch on as more than 200 hectares of bushland seven kilometres from Kambah burned across several days.

In the following months after the fire was tamed, ACT Parks and Conservation rangers set about removing thousands of burnt pines, preparing the ground for new seedlings to be planted.

The conservation is now encouraging Canberrans to join them on Tuesday morning to help restore the previously burnt section of Pierces Creek with native vegetation.

The activity will start with a short exploration of the area and a brief talk on air pollution, followed by some restoration works including planting native seeds and maintaining the trees already on the site.

ACT Parks and Conservation manager Brett McNamara said the morning was a chance for Canberrans to use their green thumbs while learning of the wider role the service provides.

“We know Canberrans hibernate over winter but every now and then it is worthwhile poking your nose outside and seeing what is going on in the great outdoors and that is what this is all about,” he said.

“As an organisation, we have done a lot of rehabilitation there after the fire at Pierces Creek and that has removed a lot of the dead standing pines. We are now at the stage where we are looking at doing some planting so we need some extra hands for planting.

“This is also an opportunity to speak with the rangers and to understand the implications of fire on the landscape, the role the area has as part of the Cotter catchment and a broader conversation and engage with the community about what we do as land managers in this part of the world.

“It is an opportunity where people can see what we have done out there at Pierces Creek.”

Mr McNamara said the bushfire has damaged Pierces Creek to a point where it will take nearly two decades to return the bushland to the way it was before 1 November.

“These sorts of sight rehabilitation take around 15 to 20 years and obviously variables like drought come into play,” he said. “This is a long term view that we take with these sorts of programs.”

The rehabilitation morning comes in a week dedicated to showcasing the bush capital, with ACT Parks and Conservation organising a series of events throughout the week with ranger-guided walks, talks, films and planting days in ACT parks and reserves.

David Hennessy - 1 hour ago
You should get the right to vote with your TFN. If the pollies can take your money they can be accountable to you. View
Daniel Duncan - 3 hours ago
Shane no that was sarcasm and its because of people like you we should raise the age to 21. View
Anthony Briscoe - 5 hours ago
Never View
News 33

Matthew Pez - 2 hours ago
Simon Adamson how is mowing your lawn at 8pm when there is still light a malicious crime? View
Robert Kearon - 5 hours ago
I would rather 8pm than 8am... not everyone is old and Karen View
Nathan Beck - 6 hours ago
David Cole it would be growing faster than they can cut it in this weather 🤣 View
News 73

Mamy Watts - 2 hours ago
Same outcome, they do nothing anyway. Look out insurance will go up with people making fake claims. View
Capital Retro - 9 hours ago
Some how I don't think insurers will cop this without conditioning the terms and conditions of their cover for home burglarie... View
Jenny Graves - 10 hours ago
Adam Rolls I presume you use your commonsense but don't actually harm them. View
News 15

William Vass - 5 hours ago
Don’t show up for a break-in but worry about scooters. What’s wrong with policing in the ACT??? View
kenbehrens - 8 hours ago
Has anyone ever been fined for smoking at a bus stop? Has anyone been fined for not wearing a mask on public transport? There... View
Nathan Lofthouse - 10 hours ago
Complete with Benny Hill music View
Opinion 80

Craig McPherson - 5 hours ago
I acknowledge the message, but to describe people who are partnered up as being 'privileged' I don't agree with. A privilege... View
Nada Krstin - 5 hours ago
Natalia Komarova yes, I have seen that, very sad indeed - it was either the couples felt 'superior' or the women in their soc... View
Natalia Komarova - 7 hours ago
When my friend lost her husband she said to some extend she lost her social circle as well. While she would catch up with her... View
Food & Wine 9

BlowMeDown - 10 hours ago
I recall my father and I taking the boat out on the western shore in the mid 1960s, where the water has yet to return. It was... View
Capital Retro - 10 hours ago
I think groundwater that enters the artesian aquifers originatesin mountainous country through rock strata. The water in Lake... View
Patrick Keogh - 10 hours ago
What percentage goes into replenishing groundwater compared to what is list to evaporation? View
show more show less
*Results are based on activity within last 7 days

@the_riotact @The_RiotACT
Virgin is restarting its Canberra-Sydney service using Link Airways planes, with up to nine flights per weekday https://t.co/QGcgoaSMTa (8 hours ago)