Community spirit as people help out in a bushfire aftermath 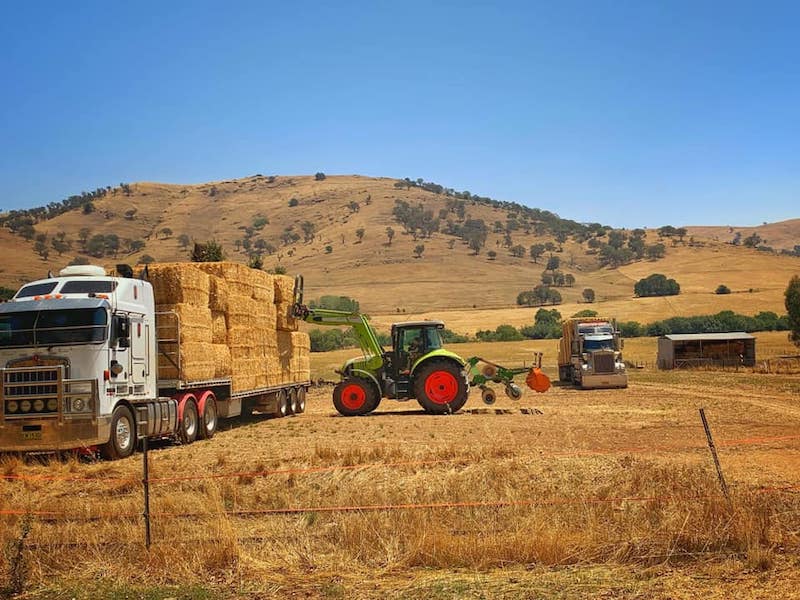 Loading hay on a property near Harden bound for farmers in the mountains. Photo: Supplied.

Bewildered cows were bellowing into the eerie grey silence after losing all of the grass to eat beneath their feet. Around them, dead bloated black sheep and cattle littered the burned paddocks. Scattered around the small towns of Tumbarumba, Batlow and Adelong, farmhouse remnants settled beneath powder-soft ash.

After five days without feed, the cows had grown so desperate they were digging with their hooves for something to eat. A few Murray Grey cows suddenly saw slabs of hay handed out to them. Their owner Donna Mclean-Beehag let her imagination loose to celebrate.

“I sent a [text] message to say the girls were so happy to see hay it was like they were standing on their hind hooves throwing up their front hooves to say, ‘Hooray!’ They had been sitting in shock for four or five days.”

Ms Mclean-Beehag says that unlike many other people around the district, her family only has a few head. Others have lost more livestock, pasture and property, and suffered terribly.

As the rector’s warden at St Jude’s Anglican Church in Tumbarumba, Ms Mclean-Beehag is grateful for the generous efforts of those helping the community from Harden Murrumburrah and further afield. All religious denominations are helping, she says. Sikh communities in Griffith and Melbourne have sent contributions including pallets of bottled water.

“It is Christ in action, people helping each other,” Ms Mclean-Beehag says.

From a trucking family in Harden, Tim Tobin had started the hay run in the aftermath of the Dunns Road fire that tore through the Snowy Mountains.

“I was up there for ten days fighting the fire out of the Gilmore valley,” Mr Tobin says. “I met the deputy RFS captain, he is distributing feed and working in with Elders and a couple of other hay runs that have been dropping off up there.”

Two truckloads had delivered 66 bales to farmers in Gilmore. Mr Tobin says most of the hay had been baled from header tailings left after the wheat harvest in the Hilltops district.

“There’s a lot of grain in it, so it’s pretty good for survival food,” Mr Tobin says. “Anything is better than nothing up there at the moment. One family farm donated 60 bales of header tailings at once, so that was amazing.”

Mr Tobin’s business TRKB Haulage usually carries frozen goods between Sydney and Melbourne. Joining him on the one-and-three-quarter hour hay run were his son Brock and a good mate Matthew Howarth who borrowed a trailer.

“There are a lot of people in need,” Mr Tobin says. “I used to have grain trucks and you see the struggles the farmers are going through with the dry times. Throw a bushfire in there and it makes it that much worse. They have enough on their plate at the moment. We have had a couple of ordinary seasons but they have a long road to recovery up there. It is far from over.”

Sarah Jones liaised with Tumbarumba Anglican Church and posted on social media to locate people who needed help. Towels, sheets and baby items were dispatched as she tried to match specific needs. She then put out calls for items of furniture for people who had lost their homes.

“People are wanting to help but did not want to give cash because they do not know where the money is going,” Ms Jones says. “This way people caught in the fires are getting what they need. We are experiencing drought but our small patch is nowhere near as bad as it is in the bushfire areas.”

From the Beggan Hill Hereford Stud, Ms Jones is Murrumburrah Harden Show Society secretary. Her husband Andrew is the society’s president and they have friends from Adelong Show Society. All the show societies help one another and Ms Jones says it is a great network to be part of.

She laughs good-naturedly at having the additional task of organising of donations.

“I didn’t need the extra workload. This is the third year I have been show secretary and I didn’t realise it was such a big workload. I had a newborn come along about the same time,” she says.

But such is the spirit of community, some people are doing all they can to help those going through tougher times.

Daniel Palmer - 8 minutes ago
Minus the fires, has me stumped why. View
The Garden, botanicus perfectus - 3 hours ago
Ann Gottaas View
Dee Small - 4 hours ago
Saw a young one on the O’Connor ridge yesterday... View
Lifestyle 16

aussie2 - 4 hours ago
Here is another for the "shopping list". It is government responsibility to ensure its citizens have access to pools and othe... View
2902 - 6 hours ago
Imagine the money one could make building apartments on this site, right out the front of the proposed light rail track View
ChrisinTurner - 7 hours ago
There is not enough attention to maintaining services in areas with dense populations. The government seems to be working on... View
Opinion 75

@the_riotact @The_RiotACT
A 26-year-old accused of being in the car that hit a police officer near #Nimmitabel will also face a trial over a prison bashing, where an inmate was hit over the head with a TV and had boiling water poured over him https://t.co/13AFhMfcYJ (1 hour ago)

@the_riotact @The_RiotACT
The @ainslie_fc has big #redevelopment plans and the first step is a change to the Territory Plan https://t.co/T9Kcushdi3 (2 hours ago)