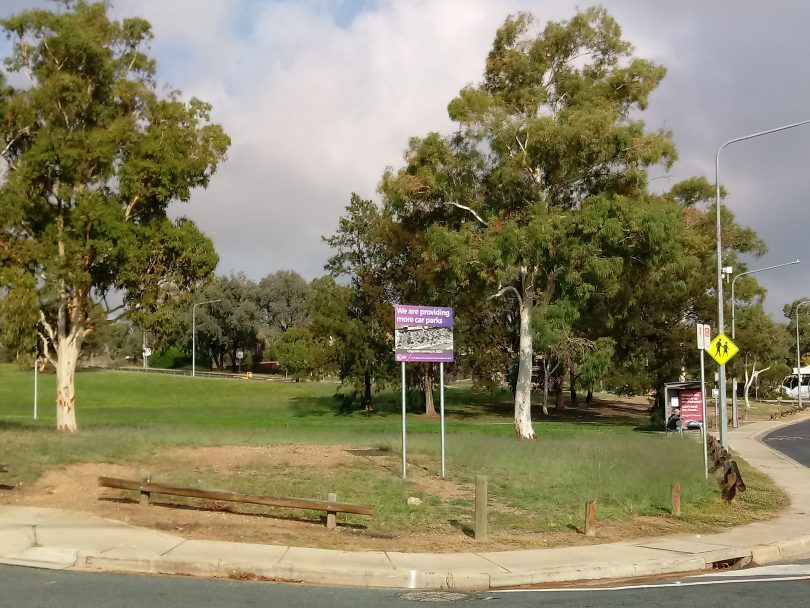 A proposed temporary car park opposite Cooleman Court in Weston has been almost halved in size and new traffic arrangements devised after community feedback about the project.

Transport Canberra and City Services (TCCS) Minister Chris Steel announced the proposal last year to relieve the parking pressure on Cooleman Court, mainly from shoppers in the growing Molonglo suburbs where there are few services and only one supermarket, at Denman Prospect.

In a letter to the Weston Creek Community Council, TCCS says the project designs have been revised after community concerns about loss of open space and increased traffic in Watling Place next to the site.

The size of the car park has been cut from 108 spaces to 65 and the second access point from Watling Place removed, leaving a single entry/exit point at the Brierly Street roundabout.

There will also be a new pedestrian crossing across Parkinson Street from Cooleman Court to the new car park.

The changes will save 15 trees on the site including several adjacent to Watling Place. Four will still need to go but that will be offset by the planting of 11 trees.

The changes also include additional planting and landscaping, including timber bollards along the perimeter of the car park and 125 Westringia shrubs.

The project has divided the community into those wanting the extra carparks and those concerned about the loss of open space.

The community council has not taken a position on the proposal but chair Tom Anderson has doubts about whether the revised plans will be worth the trouble.

“Now that you reduce it to 65, is that really going to make a difference?” Mr Anderson asked.

He is worried that it will cause even more traffic congestion in the area, particularly with the pedestrian crossing, and suggests 30 to 40 extra car parking spaces could be found around the centre to ease pressures.

“Already they go through the roundabout at a fair rate of knots so I can only imagine that it’s an accident waiting to happen there,” he said.

Mr Anderson is also concerned that the Minister has changed his position slightly on the temporary nature of the car park to a more open-ended stance. 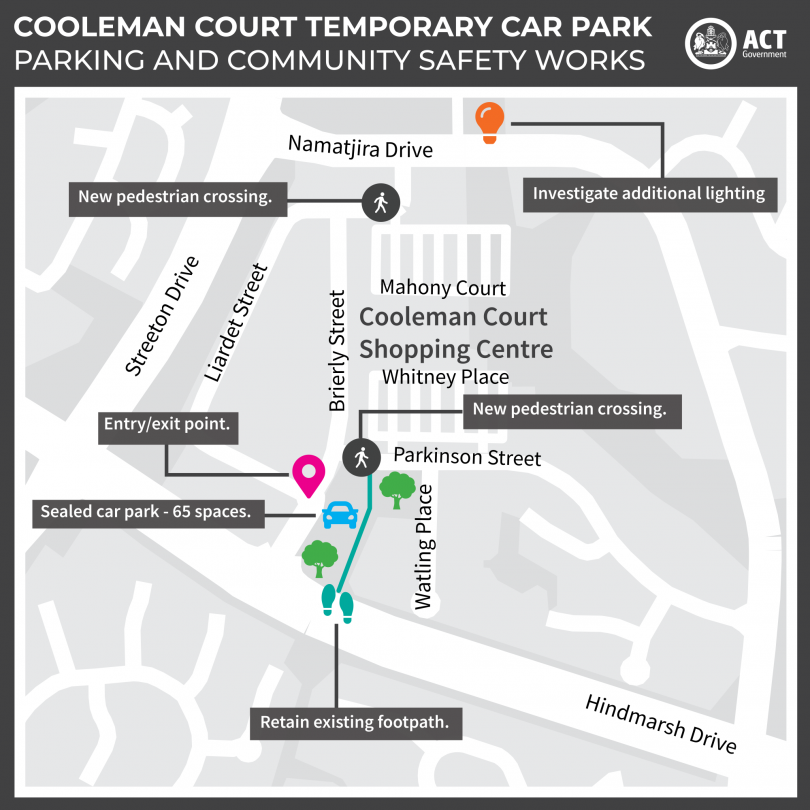 He said the car park was supposed to fill a need until the Molonglo Group Centre was built, but Mr Steel’s comment on his Facebook page does not mention Molonglo.

”It will be removed once the site is released for community facilities development or when the increased car capacity is no longer required,” Mr Steel posted.

But Mr Anderson asked: ”Why bother now with 65 car parks, for what is said to be temporary for next three years?”

Mr Anderson is hopeful that the recently approved Koko Molonglo development in Wright, with its Woolworths supermarket, will take some of the pressure of Cooleman Court.

Other changes for the Weston centre include a new pedestrian crossing on Liardet Street to the Mahony Court car park and possible additional street lighting at the underpass on Namatjira Drive.

”These improvements will see better pedestrian access to Weston Indoor Sports and the Meating Room [pub] as well as the Dillon Close car park near the Weston Creek Tennis Club,” Mr Steel says.

A development application had been expected in coming weeks but it may be delayed due to the coronavirus emergency.

Fixing the actual problem – the still-empty Coombs shops – would be a better use of everyone’s time and money.

Cooleman Court could (again) be a wonderful local precinct ... but it’s a mess - no parking, scrappy streetscaping, and a seating/play area out of Soviet Russia.

65 spaces?! That's not going to help much and the extra load at that roundabout....

Cooleman court only became an issue once all those new suburbs started going in. How about opening decent shops out that way so residents have something local

Building this car park is akin to suggesting an obese person buy a bigger sized pair of duds. Does nothing in the long term and sends everything backwards.

Shirley Willis - 5 minutes ago
Sandra Zahavah Whibberley If you check my comment I DID NOT say that you vented a poisonous attack.I said it appeared the “... View
phydeaux - 11 minutes ago
Robin Bontjer, because he did not donate $4M. It was $25k, after a push from Sharapova who donated that then tagged him to ma... View
Jonny Scott - 22 minutes ago
Robin Bontjer ones good can all be canceled out when your true colors come out! View
Business 6