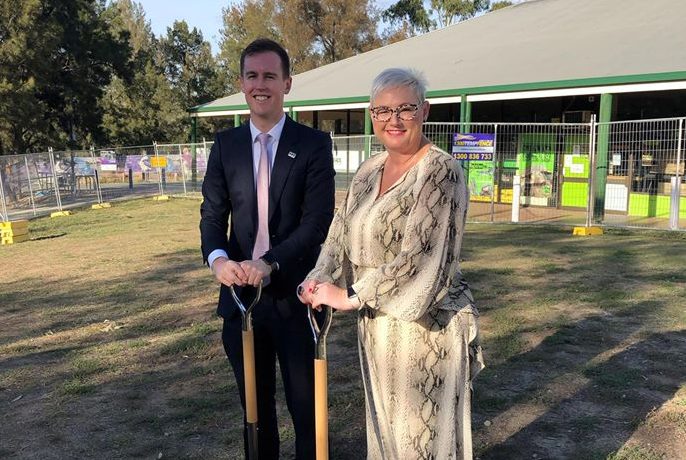 The ACT Government’s $2.3 million redevelopment of the Kambah Village is underway, which will see the installation of a range of great new amenities to improve the public areas around the shops for local residents.

ACT Minister for City Services Chris Steel, who was joined by MLA for Murrumbidgee Bec Cody, turned the sod on the start of works.

Following on from the first stage of upgrades in 2017 which saw new paving, trees planted and seats and bins installed near the central courtyard area, stage two upgrades to the Village will see upgrades to the south-east of the centre.

The existing grassed area will be replaced with new irrigated grass, which will become a shaded common green gathering space with 31 new trees, gardens, a barbecue shelter and picnic settings.

Existing trees are being replaced by deciduous exotics which will provide summer flowering, sunny space in winter, and protection from the heat during the warmer months. 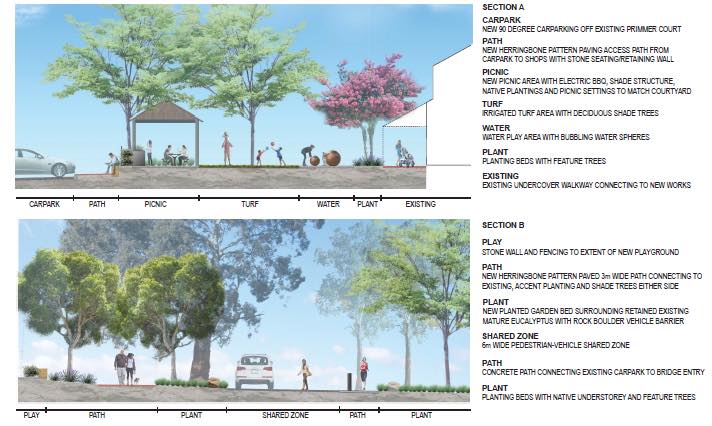 There will be a number of upgrades to the existing playground, with new play equipment, such as a basket swing, slides, a climbing frame and trampolines as well as a new shade sail to cover high use play areas.

Other improvements include new toilets, more seating, upgrades to pedestrian lighting and pavements, additional parking at the south-east edge of the shops and a bin enclosure for the commercial bin area.

The Governments’ upgrades will coincide with the private redevelopment of the local shops, which will see a major extension to Woolworths, with a new covered northern entranceway to the shops and additional retail spaces.

The development will extend the supermarket off Primmer Court, with Woolworths to be extended by 1754 square metres to a total of 3475 square metres, along with a BWS store. It will provide a larger, modern supermarket layout offering with the potential to provide many more products for its clientele along with new commercial retail space. 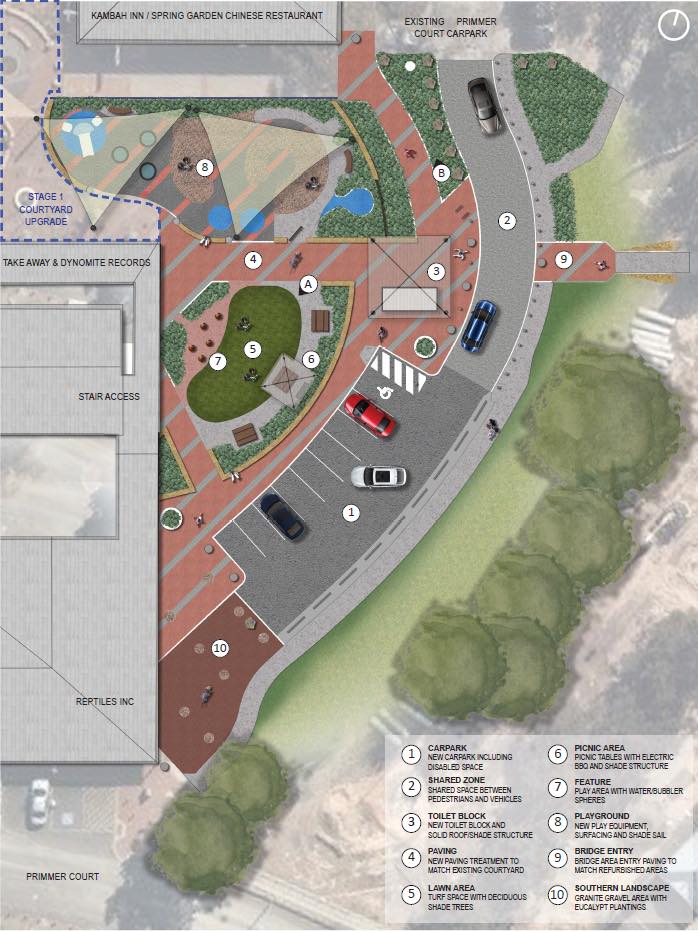 Chris Steel said it was a significant day for Kambah residents.

“Construction on stage 2 of the upgrades will complete the rejuvenation of the public areas around Kambah Village and will deliver on a key Labor election commitment,” he said.

Bec Cody said the upgrades to the public areas are an important part of the regeneration of the Village.

“We know that Kambah residents are also highly anticipating the outcome of the planning process for the proposed private development to extend the Woolworths and add extra retail spaces,” Ms Cody said.

Construction is also underway on the jointly funded urban waterways project with a pond being built adjacent to the shops.

Finally something for the worst maintained shopping centre in Canberra. Woolworths should have been dipping into their own pockets years ago to support their local rundown store.

The original pavers from the mid seventies now resemble a contour map and they make it almost impossible for people in wheelchairs to properly use the shops and adjoining taxi rank. The toilets were a disgrace for two decades and the area has looked totally disheveled for just as long.

Why is the ACT Govt upgrading the PUBLIC toilets at Mawson when we have to wait for a private developer to do this at Curtin shops. Definitely a ‘Please explain’. Or is it Barr’s well-known comment that he isn’t interested in listening to people over 40? And his mistaken belief that Curtin is populated by older people (therefore not to be listened to)?

Ann Parkinson or the ACT government don’t own them.

Are the metal sheep being mothballed??

Shane McMinn Pretty sure the intention is to keep the sheep.

Why would my taxes pay for this? I live Northside and I’ll never use those toilets!

Lin Van Oevelen the difference is even the north siders wouldn’t use it as car is way faster, cheaper and convenient than that of this red toy.

Shiva Sapkota north siders will use the light rail just like they use the bus for work ( ever caught a bus in peak time from Gungahlin ?) and it is much cheaper than parking a car in the city all day.

Total nonsense, but this isn’t a post about the tram.