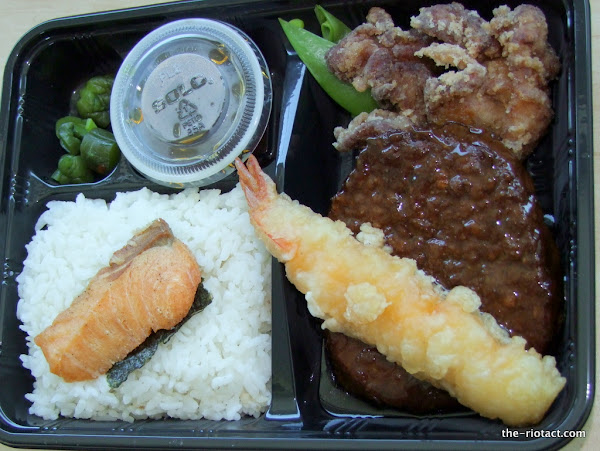 In a Bento Battle it’s obvious to compare Coo’s bento box with Tasuke’s just around the corner. Both sell for $8.50

So let’s start with the points in Coo’s favour.

— It’s faster. The boxes are pre-made and racked.
— You get free miso soup, either made up or dry so you can make it back at your desk by adding boiling water.
— The lady working the counter is absolutely delightful.
— The dipping sauce is really tasty

But then there are the things Tasuke does better.

— They make up the box fresh, so the hot things are hot and the cold things are cold.
— The meal is not dominated by a hamburger patty
— The Coo bento had a hunk of salmon on it that had been cooked far too long.

On the subject of the hamburger patty drenched in a dark sweet sauce we have consulted RiotACT’s Tokyo Bureau which fired back this response.

Yeah, that’s a demiglace sauce which is strangely popular here (one of those things the Japanese took and then made there own and now is very different from a demiglace sauce anywhere else). And they love hamburger patties here – regularly appear at cheap pensions in their dinner, cheap convenience store bentos, cheap nasty teishoku places (teishoku = fixed menu, normally served on a tray – one bowl of rice, one miso soup, some pickles and a plate with some kind of meat/fish) etc

Which as you can see from the photo puts the Coo bento firmly in the land of “cheap nasty teishoku places”.

Which might seem a bit harsh, it’s a pleasant meal (the salmon aside)

So here’s my decision making guide.

If you’re in a blazing hurry and/or really like miso then Coo is probably the go. Also if friendly service is really important to you it’s a big plus for Coo.

On the other hand if you’ve got 5 minutes in your lunch break to stand around, and miso doesn’t excite you, then Tasuke’s probably ahead for mine.

(For more sub $10 lunches in Civic check the tag, if you’ve got recommendations let me know.)

Di Hunter - 36 minutes ago
Martin Budden fact though is that horses keep the fire fuel down, start obliterating them and start increasing massive fires,... View
Opinion 18

Jeffrey Brown - 1 hour ago
Ahhhh those were the days. Standing in the queue and watching the odd brawl of dudes trying to prove their worth. Was normal... View
Kim Rumble-Kozjak - 9 hours ago
Yes!!!!! Our kids have no idea! View
Property 13

Valerie Foster - 4 hours ago
This is a problem when a city expands the crime rate goes up. View
Erika Olivier - 6 hours ago
Reality is crime is everywhere, the fact they picked her is bad luck... View
Owen Lund - 8 hours ago
Dale Simpson mate dreambeyan is the land of the free View
Community 1

@The_RiotACT @The_RiotACT
ACT Policing has located the body of a 21-year-old man adjacent to Paddy’s River Road. ACT Policing says the incident is the first road fatality of 2021 https://t.co/h37d0FswAa (44 minutes ago)

@The_RiotACT @The_RiotACT
A housing shortage in Yass means people seeking accommodation are finding themselves locked out of the town’s rental market https://t.co/CDuQ5Hbc4S (1 hour ago)

@The_RiotACT @The_RiotACT
Hannah Quinlivan is the creator behind the distinctive art along the light rail line. And there's a story behind each unique panel https://t.co/6fYF0Xtc3M (3 hours ago)