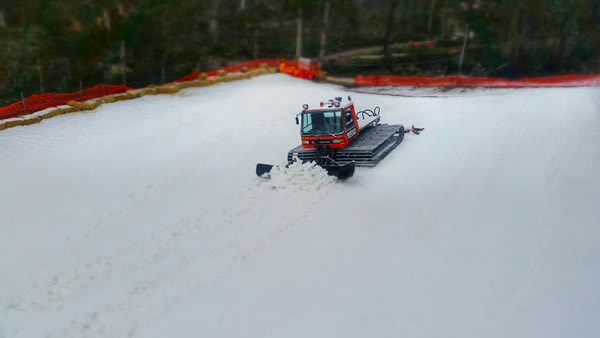 Corin Forest has had some spectacular snow making conditions throughout the week, with cover topping 1m deep in parts of the snow play area. We’re getting great weather and plenty of sunshine during the days.

There has been little natural snow fall of late and the road is accessible to all vehicles. Low overnight temperatures do cause ice in patches though, so it’s important to be careful, particularly early in the day.

We open the alpine slide when we can during winter – the low temperatures work against us though, causing the track to ice up. Please keep your eye on our Facebook and Twitter profiles for updates on its status.

Don’t rely on Facebook. Aren’t you supposed to yell at children? How else to they not turn into self centred little brats that think society owes them everything?

My missus and kids went up a couple weeks ago and had a great time. They just had a picnic and built a snowman down in the regular area but that was all they’d wanted to do. I’ve been up to ride the bobsled a few times and it’s been much better since the new owners took over. Let’s support them so they can continue to improve the facilities. That place has always had great potential, let’s hope some of it can be realised.

We had been watching the Facebook page planning to go out when the weather was favourable. After reading the bad reviews and complaints on their Facebook page we decided not to go out at all.

‘Most of the complaints?’ I just had a quick look through the reviews, and there were no more than 2 or 3 mentioning the way staff spoke to them, or their kids. More people complaining that the snow play area was too small, and then even more with positive things to say.

I certainly think that there are issues out there, and I really hope that the new management have plans to address some of those. You should read the reviews that were around before the new guys took over though…almost universally negative, and WAY more passionately so than what’s on the FB page at the moment…

I hope they make a stack of money this year, and they’re able to put some of that towards addressing the problems that people have identified.

Also, if you want to go for a bit of a drive to play in the snow, my family and I were at Mt Selwyn yesterday, and had an amazing time. Heaps of snow, heaps of areas to make a snow man and throw snow balls, a large toboggan area, plus an inner tube run which looked like heaps of fun. We saw families who’d literally set up a picnic blanket and chairs on the snow! There’s also a BBQ area, and we also say people who’d set up their picnic tables behind the car in the car park. The drive along the Snowy Mtns Highway is also stunning. Well worth a day trip if you want more guarantees than Corin can provide.

I think you are exaggerating the number of negative responses on there. You will always get some who can’t be pleased. It’s a lovely place and they are trying really hard to rejuvenate it as a place to go in all seasons. I can’t imagine any of those who work there being rude at all – always welcoming when we go. It can be really busy at times and you just have to wait your turn.

@Pistachios I don’t get the negative feedback at all. I took the kids up during the School holidays and we all had a great time. It got a bit crowded a couple of hours into the session, but that’s what you get for turning up to anything at Canberra at peak time.

We had been watching the Facebook page planning to go out when the weather was favourable. After reading the bad reviews and complaints on their Facebook page we decided not to go out at all.

We visited as a family just prior to the ‘big snow dump’ – but we still managed to have a stack on fun. The Alpine Slide was great – and we enjoyed sitting inside and having some lunch (“Best chips ever” I heard…). We hope to return now that the snow is great.

Rob Tomsen - 8 hours ago
Let’s just stop summer 😂😂😂😂😂 View
Ray Ez - 8 hours ago
Awesome! So Wuhan flu is irrelevant and climate change is the devil! Keep up the laughs! View
Carole Ford - 9 hours ago
There are probably millions of deaths a year that can be attributed to air/water pollution, this pollution is cumulative and... View
News 41

Tom Adam - 8 hours ago
Natalie the Woden area around the bus depot. (Where they had to due to land sale agreements). Not the Phillip business Centre... View
Natalie Roseworn - 8 hours ago
Tom Adam they announced some major refurbishments for Woden/Phillip not long ago. View
Lucy Irene - 16 hours ago
Mmm, not sure why ‘rainbow’ roundabouts could be an issue, curious! View
Property 20

John Hutch - 11 hours ago
I thought that these protests were a disgraceful display of the left-wing mentality and agenda to maintain oppression and vic... View
Capital Retro - 12 hours ago
"marginalisation by choice" being the PC term for "victim industry"? View
Spiral - 15 hours ago
Does anyone have accurate recent stats on how bad the problem really is: This article: https://www.news.com.au/national/black... View
News 36

George Watling - 17 hours ago
Is there actually a need for more embassies? Has there been a sudden rush of new countries needing embassy accommodation in A... View
Lifestyle 3

Chris Liddiard - 18 hours ago
Kirsten Madsen thank you for this. I’m sure she will be interested. She is really missing band at the moment. View
show more show less
*Results are based on activity within last 7 days

@The_RiotACT @The_RiotACT
Heat-related deaths are at least 50 times more common than recorded on death certificates, according to two ANU researchers who are pressing for 'climate change' to be acknowledged as a cause of death https://t.co/G1W35CdPg1 (9 hours ago)

@The_RiotACT @The_RiotACT
While most of us were working from home, our health professionals were on the front line of COVID-19. But like many (male) Canberrans, they let themselves grow and COVID became MOVID. Check out their efforts https://t.co/KVLsKnJCTk (10 hours ago)

@The_RiotACT @The_RiotACT
For Our Country, the Australian War Memorial’s Aboriginal and Torres Strait Islander memorial, has taken out the top gong at the ACT Architecture Awards on Friday night, winning the prestigious Canberra Medallion. See all the winners https://t.co/dKch27SZqs (12 hours ago)