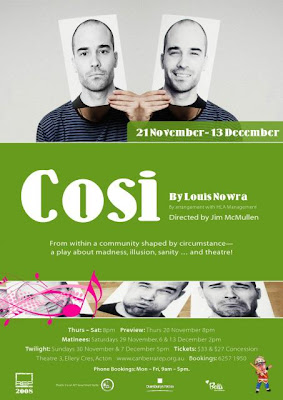 Louis Nowra’s Cosi is currently running at Canberra Rep’s Theatre Three (behind the school of music in Acton if you haven’t been).

A play first performed in 1992, about events in 1971, now brought to the stage here in Canberra in 2008 at times the material seems weirdly adrift.

Buying two tickets at the box office took a good ten minutes (and we were first in line) so I had plenty of time to read the scads of glowing reviews this has received in other media. I recommend buying in advance.

Cosi is a tale of boomer Melbourne at the same time both familiar and a million miles away.

The story is of a young university graduate who needs the money and has taken the chance to direct at a mental institution which wants to put on a play.

(So once again the theatre world finds nothing more fascinating to bring to the public than another play about themselves. It was novel 300+ years ago when Shakespeare came up with the wheeze but it’s getting mighty tired now.)

For better or worse mental institutions as depicted no longer exist either.

And yet, it’s been wonderfully staged here.

While a derelict theatre is not the tallest order to put on in a theatre it’s well done. The use of lighting to change the focus around the vast stage is masterful, the sound direction is top notch.

But most important is the acting.

As a cast of nutters every member of the ensemble has ample opportunity to tear up the scenery (or in some cases set fire to it) and they take it and nail it every time.

The audience was mesmerised and drawn in right from the start and held throughout.

There are plenty of laughs, touching moments of sadness, and at the end of the night a great time had by all.

The season is running:

Details to book are online.

Hey, I only just saw this article.

Thanks for the review, johnboy. Glad you enjoyed the show.

Everyone else should get along to see it. Tickets really are selling fast 🙂

Pat (aka “Justin the Social Worker” in the cast of Cosi)

@The_RiotACT @The_RiotACT
A large tree was extinguished in Namadgi National Park by members of the ACT Rural Fire Service officially marking the end of the 2019-20 season. The ACT ESA and the NSW RFS have ended the season by thanking their members and the community https://t.co/JCbHg90RFG (31 minutes ago)