Cosplay day coming to Skate In The City 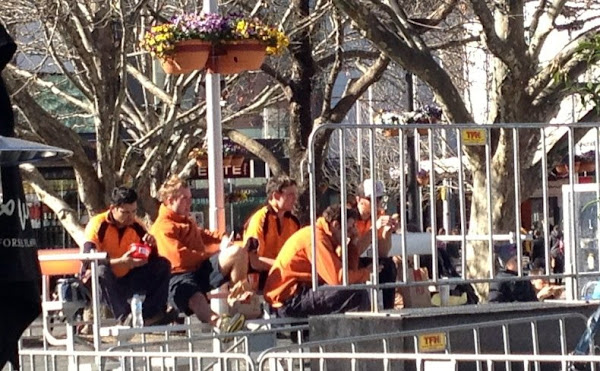 James Fahy has sent in this sweet picture of colour coordinated tradies watching the ice skating in Garema Place.

But in other news Impact Comics have announced on Facebook that the wildly successful ice skating is bringing the curtain down with a Japan Day to include cosplayers on ice.

Sunday 29th of July is Japan Day at the Ice Skating rink in Garema Place!

The Embassy of Japan wants to see COSPLAERS on ICE!

The first 25 people to show up at IMPACT COMICS on Sunday 29th of July before 11:30am will get a free pass to go Ice Skating in costume!

Even better, Cosplayers get to hit the Ice at 11:30 to parade their costume before the general public joins you at 12 noon.

Even better better, The Embassy of Japan have threatened to have prizes for the cosplayer that can get the biggest cheer on the ice!

Sadly I’ll actually be in Japan for the big day (For the Fuji Rock Festival if you’re interested, taking Japan Day to new extremes) but if anyone wants to send photos to images@the-riotact.com Editorial Resource Number 2 will no doubt love them).

That’s right, some employees have to wear a uniform, we can’t all sit around all day in casual clothes clicking approve between firing nerf guns around the office.

I love the ‘sadly I’ll actually be in Japan’, as if it’s a tremendous burden! A collection of cool things will have to be displayed here for us yokels.

For the Fuji Rock Festival
Don’t get too friendly with the locals(aka moon bears).

Bek Clark - 49 minutes ago
Absolutely. They should get that just for having to work with doctors. View
Business 13

Liam Grimshaw - 3 hours ago
I’m vegan View
Buddy Edwards - 4 hours ago
Dean Newman you have given me a migraine reading your words. View
Frances Jane - 10 hours ago
Dan Backhouse I'm virtually vegetarian, and have been vegan at times, but found the article to be outdated. Perhaps it's the... View
Breaking 2

Guy Noble - 20 hours ago
37 bux an hr to sit in a truck and drive for a few hrs,,, where do i sign up View
show more show less
*Results are based on activity within last 7 days

@The_RiotACT @The_RiotACT
What a difference 12 months makes, with bumper crops expected in SW NSW this spring thanks to favourable weather https://t.co/rFyiXzavcm (56 minutes ago)