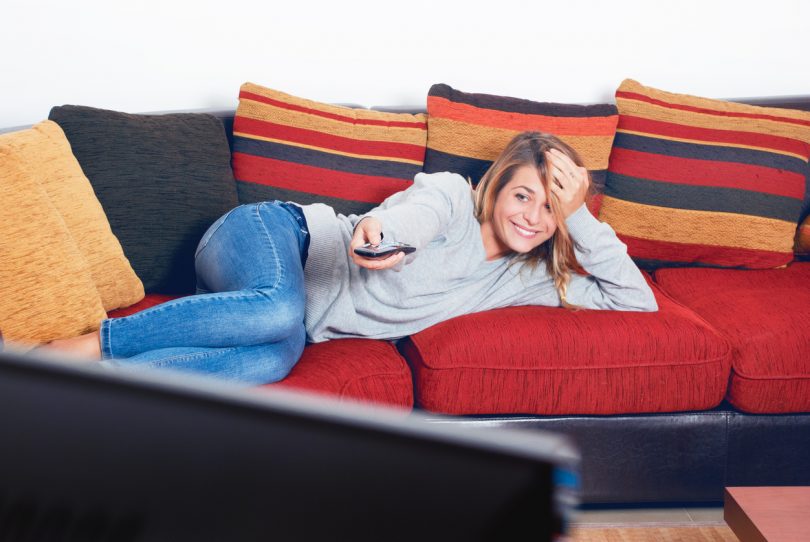 If you’ve noticed a trend towards Canberrans curling up on couches and having glazed eyes at work it could be because we’ve earned the dubious distinction of having the most ‘binge-racers’ of Netflix series in Australia.

That’s not necessarily because we’re ‘basement-dwelling couch potatoes’ according to the Netflix powers that be, but because we’re a mob of ‘super fans’ who see speed watching as an achievement to be proud of – something to brag about! TV is our passion and binge racing is our sport … or so the story goes.

To clarify, ‘binge-racing’ is quite different from ‘binge-watching’ and so perhaps we do live normal lives in between new series coming out. Binge-racing refers to watching an entire season from start to finish within the first 24 hours of its release on Netflix, whereas binge-watching is something Netflix doesn’t release data on.

Around the world, 8.4 million Netflix members have binge-raced, with the number of ‘launch day finishers’ increasing more than 20 times between 2013 and 2016.

Australia has been ranked at number eight globally in terms of the highest percentage of binge-racers per country.

Gilmore Girls: A Year in the Life is the top ‘binge-raced’ series for Australia, as it is globally.

Second on the list of Australia’s top ‘binge-raced’ series is Marvel’s The Defenders, while Santa Clarita Diet comes in third, The Seven Deadly Sins is fourth and The Ranch comes in at number five.

The series White Gold comes in at eighth on Australia’s list but our nation has the highest percentage of binge-racers globally for this series.

Australia is also home to an unidentified Netflix member who is the 12th biggest binge-racer in the world and has raced through 13 different series this year.

“There’s a unique satisfaction that comes from being the first to finish a story — whether it’s the final page of a book or the last, climactic moments of your favourite TV show,” said Brian Wright, Netflix Vice President, Original Series.

“Netflix allows you to watch in a way you never could before, and there’s nothing better than seeing a show engage our members and ignite a passion for viewing.”

In case you think Canberra’s prowess in binge-racing has anything to do with the weather, it’s worth noting that Queensland takes out second place for the top Australian binge-racing states or territories. Tasmania comes in third while NSW is down in last place.

Below is a list of Australia’s top 20 binge-raced shows:

Do you binge-race through a Netflix series in 24 hours? If so, why do you do it and which series is your favourite?

Binge-racing – the global stats from Netflix.

Yeah, like me you are missing out on obesity, slothfulness and a whole lot of other health problems down the line. Facebook, Twitter, Instagram, Netflix… Let’s hope the next fad is health and fitness and it *doesn’t* go out of style.

There is more to life than watching Hollywood pap at home on a daily basis especially when we have regular film festivals with offerings that will never be seen on TV and actually require the viewer to think. The bonus is that one has to get out of the house and walk some of the way to see them.

Yeah, like me you are missing out on obesity, slothfulness and a whole lot of other health problems down the line. Facebook, Twitter, Instagram, Netflix… Let’s hope the next fad is health and fitness and it *doesn’t* go out of style.

Dan Adams - 20 minutes ago
Sign and share the petition to return the limits back to 60km. https://chng.it/chvTLkD8bc View
News 198

Dan Adams - 22 minutes ago
Sign and share the petition to return the limits back to 60km. https://chng.it/chvTLkD8bc View
Business 14

Simon Mitchell - 28 minutes ago
Grace Hayes let alone waiting for 2 weeks to apply and wait 30 days to get paid… View
Nik Kiermaier - 5 hours ago
Grace Hayes and Bar Bar still gets paid what a joke View
Tramcar Trev - 6 hours ago
I like the idea that a business should be allowed to open with fully vaxxed staff serving only fully vaxxed customers... I'm... View
Community 23

Simon Trommestad - 3 hours ago
Marc Edwards, you can believe that. They could just as easily be killed by a staf or other bacterial infection. They could be... View
Rastislav Zrelak - 4 hours ago
We or politicians need to admit that Covid will be here with lockdowns or without them and same with vaccine, our immune syst... View
Callum Bowen - 6 hours ago
That’s actually a really good point. People do die all the time and there’s nothing worse than pesky safety requirements... View
News 61

Clare Thomas - 4 hours ago
What about accessibility for greater inclusion for everyone? View
show more show less
*Results are based on activity within last 7 days

UPDATED 3:00 pm: Year 12 students have been given the green light to return to school at the start of Term...
Breaking 0

@The_RiotACT @The_RiotACT
The ACT Government will plant around 30 crepe myrtle trees in Bonner following feedback from Gungahlin residents about how to improve the median strip along Mabo Boulevard https://t.co/S5z6tEs5Gh (2 hours ago)

@The_RiotACT @The_RiotACT
The NRL finals series is well underway, but the Canberra Raiders aren't involved thanks to their season of woe. Gavin Dennett runs the ruler over where the 2021 campaign went wrong https://t.co/00ZpfLULI6 (3 hours ago)