Cowra, so many secrets to reveal 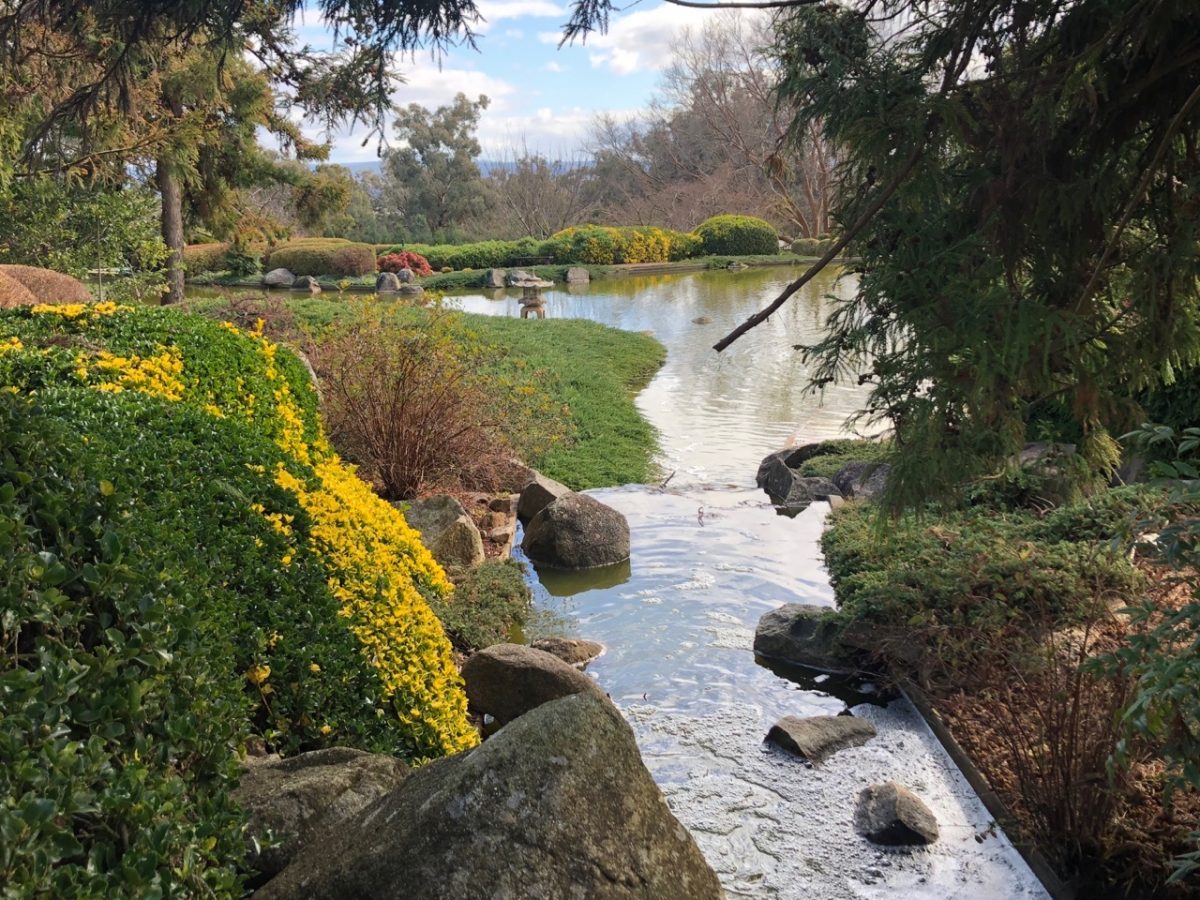 Cowra’s Japanese Garden and Cultural Centre is about to burst into spring colour. Photo: Marg Wade.

Around two-and-a-half hours’ drive from Canberra on the Central Tablelands of NSW lies the rural settlement of Cowra.

Located within the Lachlan Valley, the small town has a population of around 12,000. The name Cowra comes from an Aboriginal word meaning ‘rocks’. Casting an eye over the landscape, you can see why, with its distinct random distribution of large boulders, often found in clumps.

One area where those boulders feature is at the Cowra Japanese Garden and Cultural Centre.

Almost ready to burst forth with spring colour, this 5 ha garden replicates Japan’s landscape and incorporates existing boulders, with two at the top of the hill called Yogoseike and Shugoseike. Beautifully tended lawns and gardens incorporate hedges, waterfalls, streams and two small lakes.

But why a Japanese garden in a small country town like Cowra?

The town’s connection with the Japanese goes back to World War II. Between 1941 and 1947, over 1000 Japanese prisoners of war were housed near Cowra along with Italians, Chinese, Koreans, Indonesians and others.

Known as Number 12 Prisoner of War Camp, the Cowra establishment was one of 28 such camps throughout Australia.

It consisted of four 17-acre compounds, each designed to hold 1,000 people. Around each compound was a separate perimeter fence consisting of three barbed wire fences, nine metres apart. Inside the spaces was concertinaed barbed wire. Sentry guards would patrol the outside perimeter on raised earth walkways called the ‘catwalk’, and a series of large guard towers were located around the compound’s perimeter.

The site is listed on the NSW State Heritage Register and evidence of the camp’s structure can still be seen in Evans Street. Building footings and floor slabs, along with a reconstructed guard tower, signage and descriptive audio, provide a glimpse into the significance of what occurred here. 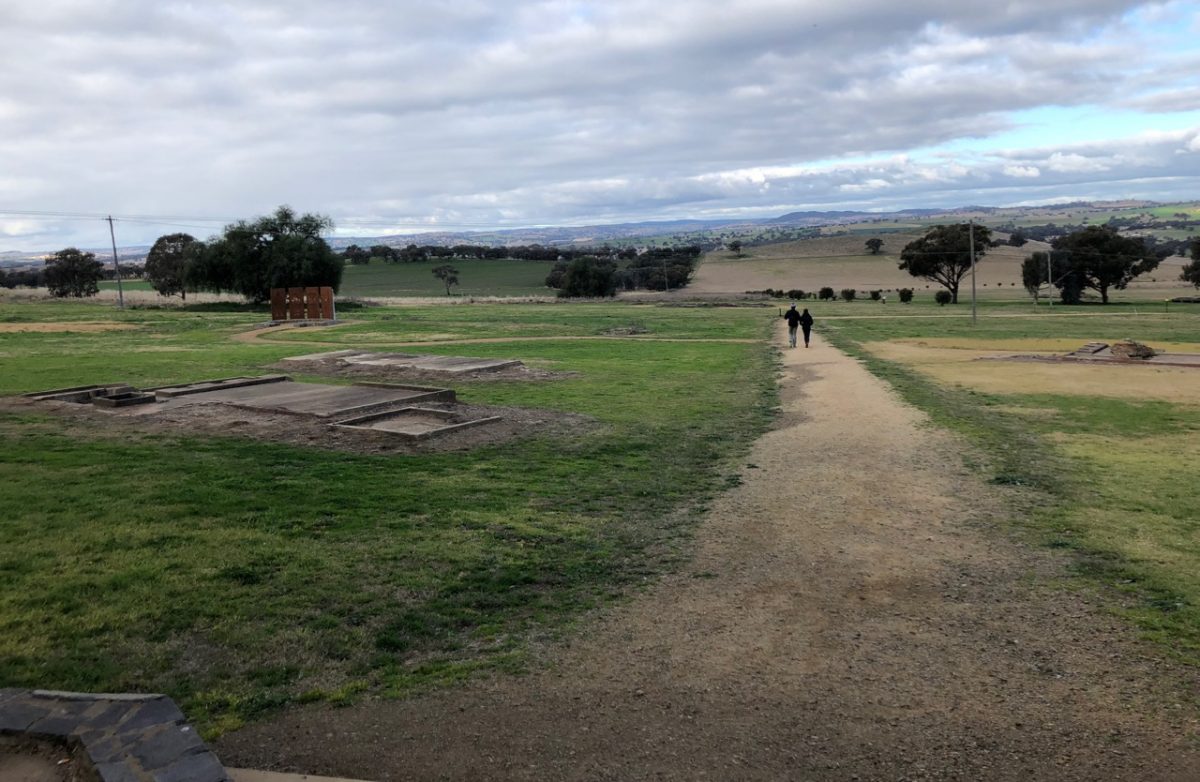 Evidence of Number 12 Prisoner of War Camp, the site of the Cowra Breakout, can still be seen. Photo: Marg Wade.

Enemy soldiers lived a relatively pleasant existence in the prisoner of war camp, with playing fields and space for vegetable gardens. Prisoners were issued free cigarettes and enjoyed plenty of fresh, locally grown and sourced fruit and vegetables, meat and fish. Italian and Japanese officers were even provided with pillowslips and sheets – a luxury not offered to any rank of Australian soldiers!

In the Japanese military code, there was no concept of surrender and Japanese soldiers would rather die than be captured. The Japanese struggled being prisoners of war and the disgrace, humiliation and self-hatred it created.

By 1944, overcrowding of Japanese prisoners was a problem and it was decided to move some prisoners to another camp in Hay, in western NSW.

This was a defining moment.

The Japanese held emergency meetings, and many decided to regain their honour by attacking the camp perimeter, resulting in their deaths.

The attack was launched at 1:50 am on 5 August 1944. The carnage that ensued saw 231 Japanese killed (three more were to die of wounds later). Four Australians also died.

Several Japanese suicided in the bush after escaping, and some even threw themselves under passing trains. The last remaining Japanese prisoner was recaptured nine days later. Many surviving Japanese prisoners kept their time at Cowra a lifetime secret when they returned to Japan, while others saw their experience as liberating from Japan’s rigid cultural traditions. 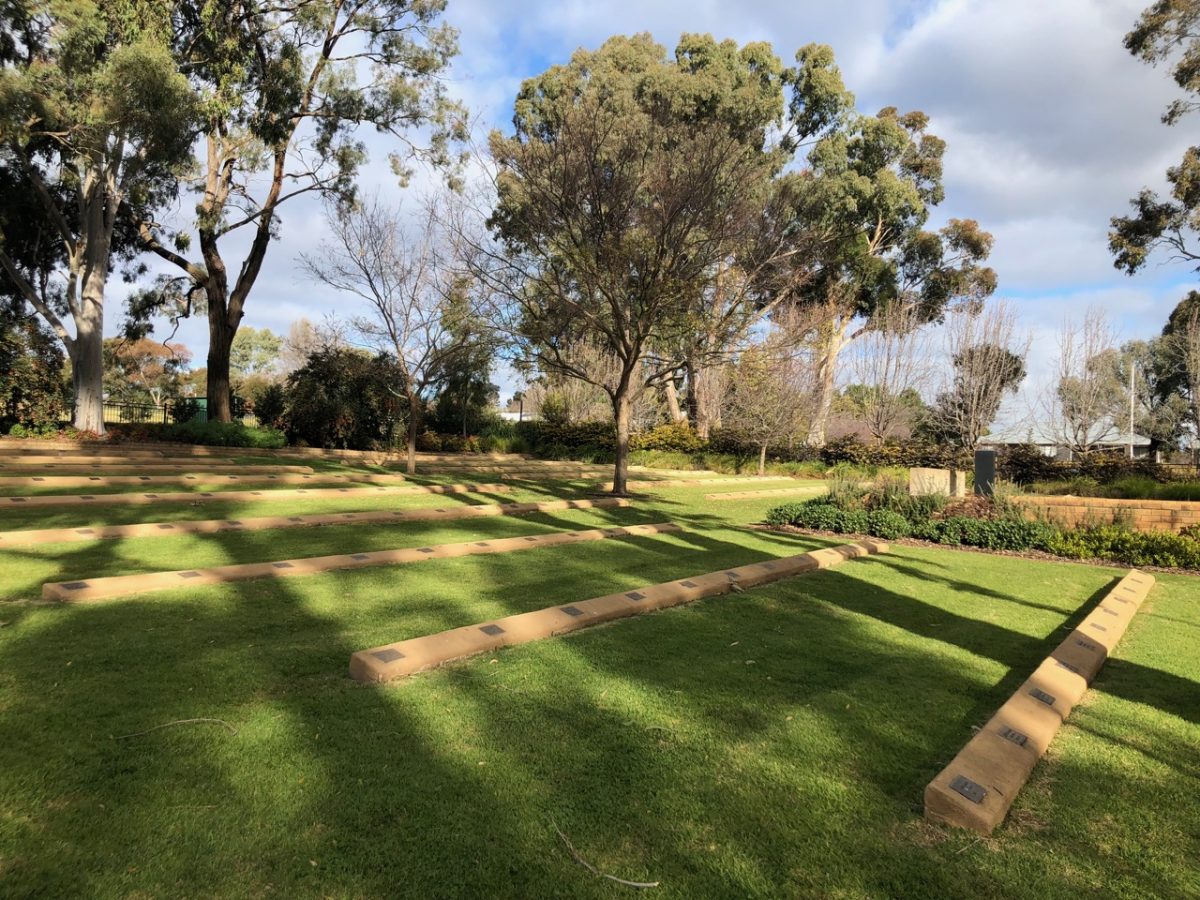 Masuru Moriki was sent to Cowra Prisoner of War Camp after his capture in New Guinea. He reluctantly took part in the breakout on that fateful night, which he described as a “suicide mission”.

Afterwards, he noted that many of the key instigators of the breakout survived and he questioned Japan’s hardline military code which led him on a deep and personal spiritual journey. Mr Moriki acknowledged the respect with which Australia conducted itself during his time at the camp and after the breakout.

“Your country was very generous in its handling of the incident,” he said.

“You buried the dead with care and gave perfect care to the injured … the investigation of the incident was done in fairness … I feel deep gratitude to you. Cowra is a place of my rebirth.”

Cowra held a special place in the heart of Mr Moriki, who revisited many times, including in 1994 for the 50th commemoration of the breakout.

The Japanese Garden and Cultural Centre, the site of the Cowra Prisoner of War Camp and the Japanese War Cemetery, are linked by an avenue of Japanese cherry trees. The focus is on reconciliation and the unique bond between the peoples of Japan and Cowra.

Cowra Visitor Information Centre holds a special display of Number 12 Prisoner of War Camp and an informative hologram presentation of the Cowra Breakout along with detail of other nationalities held in the camp. Cowra has so many secrets to reveal. And with spring just around the corner, the gardens and the Japanese cherry trees will be a true delight.

“Four Australians also died.” So much more could have been said. Like – two were awarded the George Cross for their bravery in facing the escaping Japanese while in charge of a machine gun, And disabling the gun so it could not be used against the Australians.

“Four Australians were killed in the breakout – Privates Benjamin Gower Hardy, Ralph Jones and Charles Henry Shepherd. Lieutenant Harry Doncaster was killed when ambushed during the recapture of the prisoners. Hardy and Jones were posthumously awarded the George Cross.”
https://www.naa.gov.au/sites/default/files/2020-05/fs-198-cowra-breakout-1944.pdf

Cowra certainly is a fascinating place to visit. I’ve just written a book about the Cowra Breakout. It’s an extraordinary story, and the people of Cowra do an outstanding job remembering it.

That garden is amazing. Have been there once.

I went to Cowra about 25 years ago and I very much appreciated learning about the Cowra Breakout. I went back about two years ago and it appeared that the Japanese Gardens (as pleasant as they are) had smothered everything. At the least better signage is required so that we history buffs can find what we came to see. Further, I hope the town hasn’t drifted into a ‘Don’t mention the war attitude.’

The hologram at the Information Centre (Cnr Grenfell and Boorowa Roads) is worth seeing.

Nice story, beautifully written and all so true. I was there, with the Cowra High School sports teams (in first rugby league 13 and athletics teams) that arrived in Cowra by train around 1.40am on the morning of Breakout. I am 93, living in Canberra for 50 years, and believe I am the only member of those teams still alive. On arrival we saw search lights and heard sirens which prompted one team member (who shall remain anonymous) to remark: “Wow. there’s a big party going on at the POW Camp tonight”. A year later I became a journalist at the local newspaper, The Cowra Guardian, and wrote about the breakout many times, including an interview with the Coroner Fred Arnold who showed me a copy of the depositions of the coronial inquiry. Great to read about the old home town. Thanks for posting. Ron Norton.

Hi Ron, I’m a journalist with Riotact and would love to speak to you about this. Can you call me on 0408 920 306 or email shopman@region.com. au .Thank you, Sally Hopman.

Happy to talk to you Sally. Can we make it next week? I’ve been unwell with the rotten flu this week. I will contact you on Monday and organise a time. Thanks for replying. Ron N.

Canberra has been lucky to have Ron Norton in our midst
https://www.cowraguardian.com.au/story/5877557/ron-norton-celebrates-his-90th-with-99-descendants/

Thanks for the leg-up Peter. Pretty good story from The Guardian of three years ago. I spent 15 years at The Guardian as Sports Editor, senior journo and in latter years Assistant Editor because the Editor Bob Sullivan was sick frequently and it was left to me to get the paper on the street on time. Pretty good paper in those years actually. I was there from 1945 tp 1960. Do I now you from somewhere?

Thanks Ron – I suspect not. I grew up in Sydney and have been in Canberra since 1972.

I was delighted to be able to have visited Cowra once and have a look at the camp site and the stories of the break-out. Privates Hardy and Jones were exceptionally brave men to continue facing the charging Japanese POWs.

Hi Ron, I’ve just left a message for you. Happy to have a chat at your convenience. Thanks, Sally.

Angelo Laurenza was an Italian Prisoner of War(POW) at the Cowra Internment Camp during World War 2. POWs who weren’t officers were expected to do work where it was available and locally, many were assigned to farmers to partially alleviate the shortage of local agricultural workers. Mostly the placements of Italian POWs worked out well for both sides. They could escape the boredom of camp life, generally eat better, and fraternise, to a greater or lesser extent, with “the locals”. For the host farmer and their families, an extra pair of hands (and often skills) to help with the never-ending hard work of the farm was a welcome relief.

For many centuries a feature of POW life “out of hours” has been crafting of items for sale, barter, to send home to family as keepsakes, or as gifts. Italian POWs were no exception and Laurenza made a little treasure for a local resident, Violet Dawes, which we hold today in our collection. Visitors from MGNSW “discovered” the item and you can read the story at the MGNSW Storyplace site: https://storyplace.org.au/story/message-in-a-bottle/

Great place to visit soon when blossoms are blooming

Brad Williams And if people wait about 2 or 3 weeks you may also get to see the canola flowering (remember not to trespass on farmers’ paddocks and park safely at the side of the road.)

It’s such a beautiful spot and such an amazing story behind it.