Creativity and camaraderie rise over a dead rat 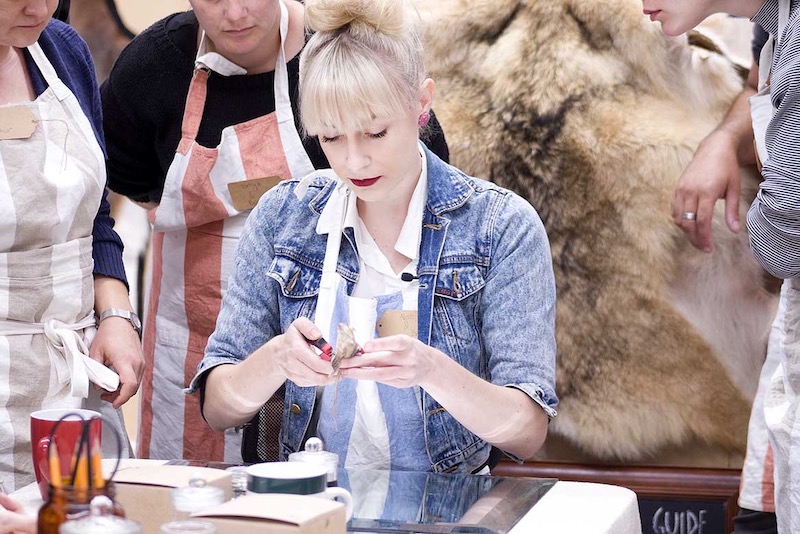 Some women enjoy skinning a dead, four-legged, long-whiskered rat. Natalie Delaney-John has skinned plenty of rats and other dead animals. “Skinning is surprisingly beautiful and relaxing,” she says.

The host of sold-out taxidermy workshops in rural NSW, Natalie and fellow creative artists connect women and men to other like-minded people by teaching them unusual skills. Soon they will help people in drought-affected districts maintain their mental wellbeing. 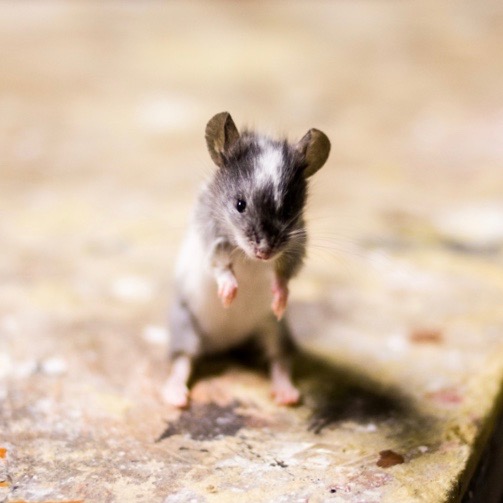 A completed rat on display.

The rats and chicks she uses are raised to feed pythons. She also works with game animals killed by hunters.

Workshops, including willow weaving are so specialised you would expect them to sell out in capital cities only. Yet in places like the river-side village of Jugiong, Nangus (between Wagga Wagga and Gundagai), Cootamundra and Temora, people are learning botanical art, macramé, portrait photography, textiles, bark tanning, leatherwork and more. 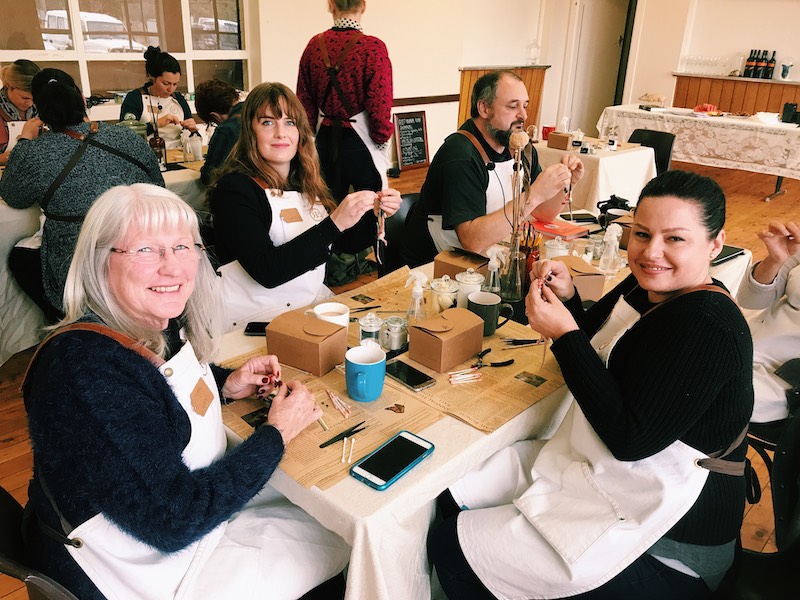 A class working on their rats.

The owners of studios down back lanes, village halls and cafes have partnership agreements with the Wired Lab, an artist-led organisation which draws in people of all ages from the surrounding communities for the popular workshops. Artist and curator Sarah Last, Wired Lab’s founder and chief executive chooses what she thinks people are interested in.

After working in arts and cultural sectors she wanted to be more immediate, dynamic and responsive to community needs and creative pursuits. She says the name ‘Wired Lab’ sprang from a landscape project involving wire, and implies being well connected. “You don’t have to be from the city to be making high quality and compelling work,’’ she says.

“We have had really wonderful engagement. It is in its third year, it has been really successful. We are offering 26 workshops this year, which is quite a big program. Once people have gone to one or two they feel a lot more confident. They realise you don’t have to be an expert at everything. The beauty about a lot of our workshops is you can be a practising artist, or someone who wants to come in and have a dabble,” Sarah says. 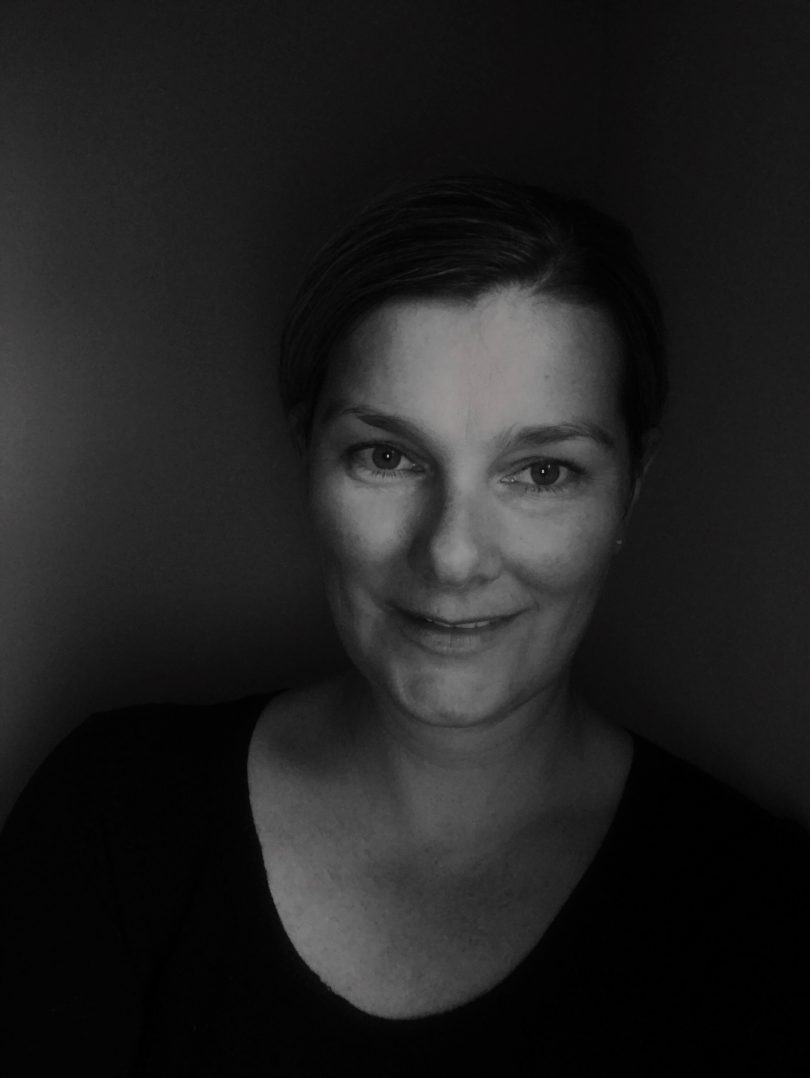 Many of the participants continue with the skills they have learned, creating small cottage industry-type, kitchen table businesses, particularly for women.

“We contribute to a community’s wellbeing, build social cohesion, we have created within the people attending our workshops networks and friendships, where they come together and that is something I am really proud of. We will soon be announcing a partnership with Murrumbidgee Health for a subsidy program for people who have been drought affected to attend our workshops,” Sarah says.

Natalie Delaney-John’s taxidermy course, for example, touches many interest areas. “We get a lot of people coming who hunt, which a lot of people do when they live rural and regionally, and also a lot of women coming to our taxidermy workshops,” Sarah says.

Natalie chose taxidermy from the simplest of curiosities. “I was screaming out for a creative outlet and became really interested in the art of taxidermy when I found out that you have not been able to learn it in Australia since the 1970s,” she says.

She harassed a mentor until he took her on, spent every weekend there for three years to learn basic skills and travelled to Spain to help build some works for a museum on the history of hunting.

Natalie will speak at the National Endangered Skills and Trade Show in Canberra on July 13, and at the National Museum of Australia as part of a panel about how her traditional training and skills have been used to innovate bespoke solutions for modern problems or products. She will also speak at the M16 Artspace on the art of taxidermy.

Wendy Whitnall - 4 minutes ago
Kaija Murray you should get the new BMW it looks great, I might have a look. Sounds meaty 👍 View
ChrisinTurner - 3 hours ago
Imagine the performance it would have if it was an EV. View
Community 4

Jorge Gatica - 21 minutes ago
Alex Troy Elsworth Adkins dog parks are an accident waiting to happen View
Alex Troy Elsworth Adkins - 32 minutes ago
Would love to see more dog parks. I know most neighbourhood ovals can already be used for this but they are not fenced which... View
Samuel Gordon-Stewart - 1 hour ago
Leave them alone! Lovely open green in our urban jungle space should remain lovely open green space as much as possible. View
News 16

Alex Nicolson - 1 hour ago
Albert Blair It did show the gubmint was trying to do something but I agree it seemed pretty ineffective. View
Scottie Zuxkerberg - 7 hours ago
I had no idea these vouchers were on offer, so a 100% total failure from my perspective... pretty much the usual from this in... View
Daniel Oyston - 7 hours ago
Scott Abela sorry, confused how free parking would fix it all 🤷‍♂️ View
News 35

Tim Evans - 1 hour ago
They were useless. View
Justin Alexander - 7 hours ago
Bekah Glaz there are drastic shortages in certain subjects (in some schools 70% of their “maths” teachers aren’t traine... View
Community 1

Flinders Doyle - 3 hours ago
Love Meating You . Great customer service and the quality is the best! View
Community 5

ChrisinTurner - 6 hours ago
Is this another example of land speculation like City Block 1 Section 96? View
Robert Mair - 7 hours ago
A increased employment base in Gungahlin will lead to more population occupying more high density residences leading to more... View
Viv Wang - 7 hours ago
when there were rumours of a cinema coming to gungahlin when you were a kid and now you’re 22 Laura Herbert 🥲🥲🥲 View
Property 10

Kate Eliza - 7 hours ago
Hristo we are building a farm house right now and can Def attest to the huge increase in costs of building materials.. and di... View
show more show less
*Results are based on activity within last 7 days

@the_riotact @The_RiotACT
Lake George is lapping at the highway after recent rain - that story and all the top #news and features in this week's newsletter. Subscribe now! https://t.co/jghXdK3ZbG (36 minutes ago)