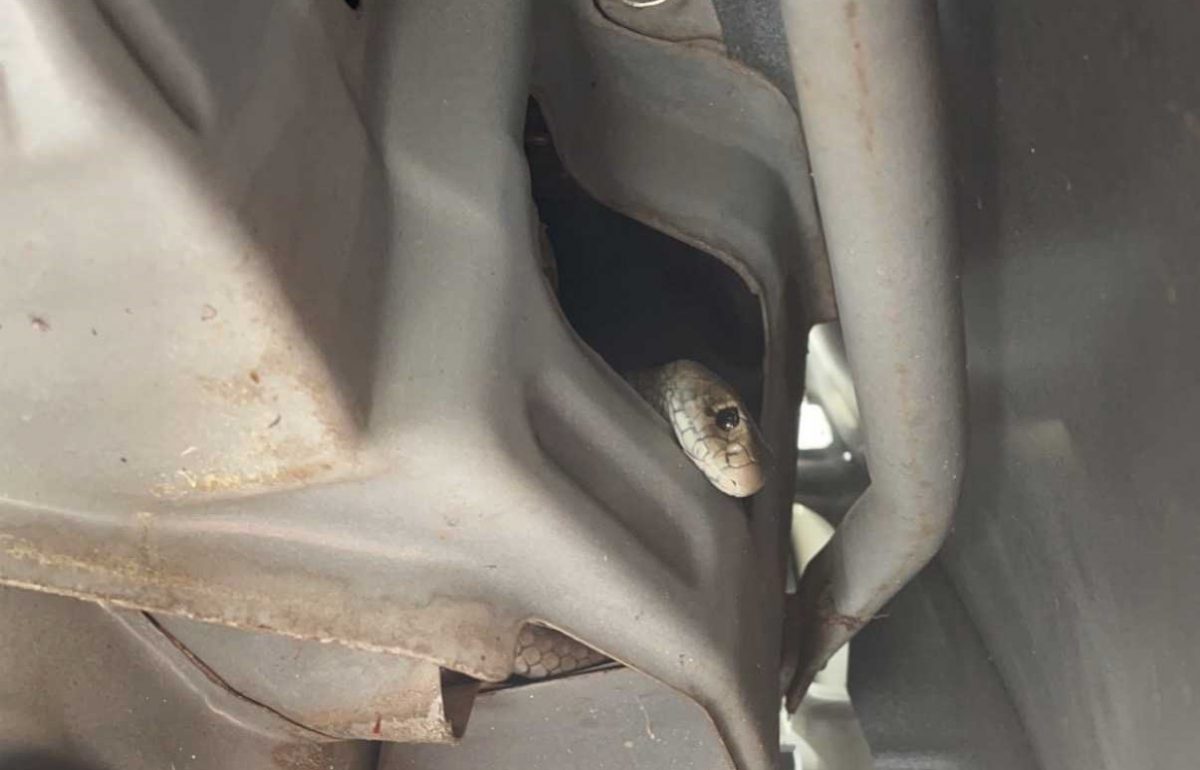 You would expect to find a snake in the garden, but at a service station?

Ruth Fearnide was whiling away the time waiting in line to fill up at the Ampol service station in Kambah on Tuesday (6 December) morning when some other customers knocked on her window.

“We just saw a snake crawl up into your wheel,” they told Ruth. “It’s inside your engine bay.”

Taken aback and moving into shock, Ruth jumped out of the car and then asked the young man to get her keys and wind her windows up. “Get her bag as well,” his girlfriend said.

Who ya gonna call?

Well, Access Canberra at first, but it’s snake handler Liam Thornton from the Canberra Reptile Zoo in Nicholls who gets the job done.

While Liam made his way to Kambah, the station manager cordoned off the car and kept watch with some of the neighbouring Repco store staff while Ruth was taken inside for a calming cuppa.

When Liam arrived, the first thing he did was take a photo with his phone of the car’s undercarriage to see where the snake was and showed Ruth, who then watched from the safety of the station shop. 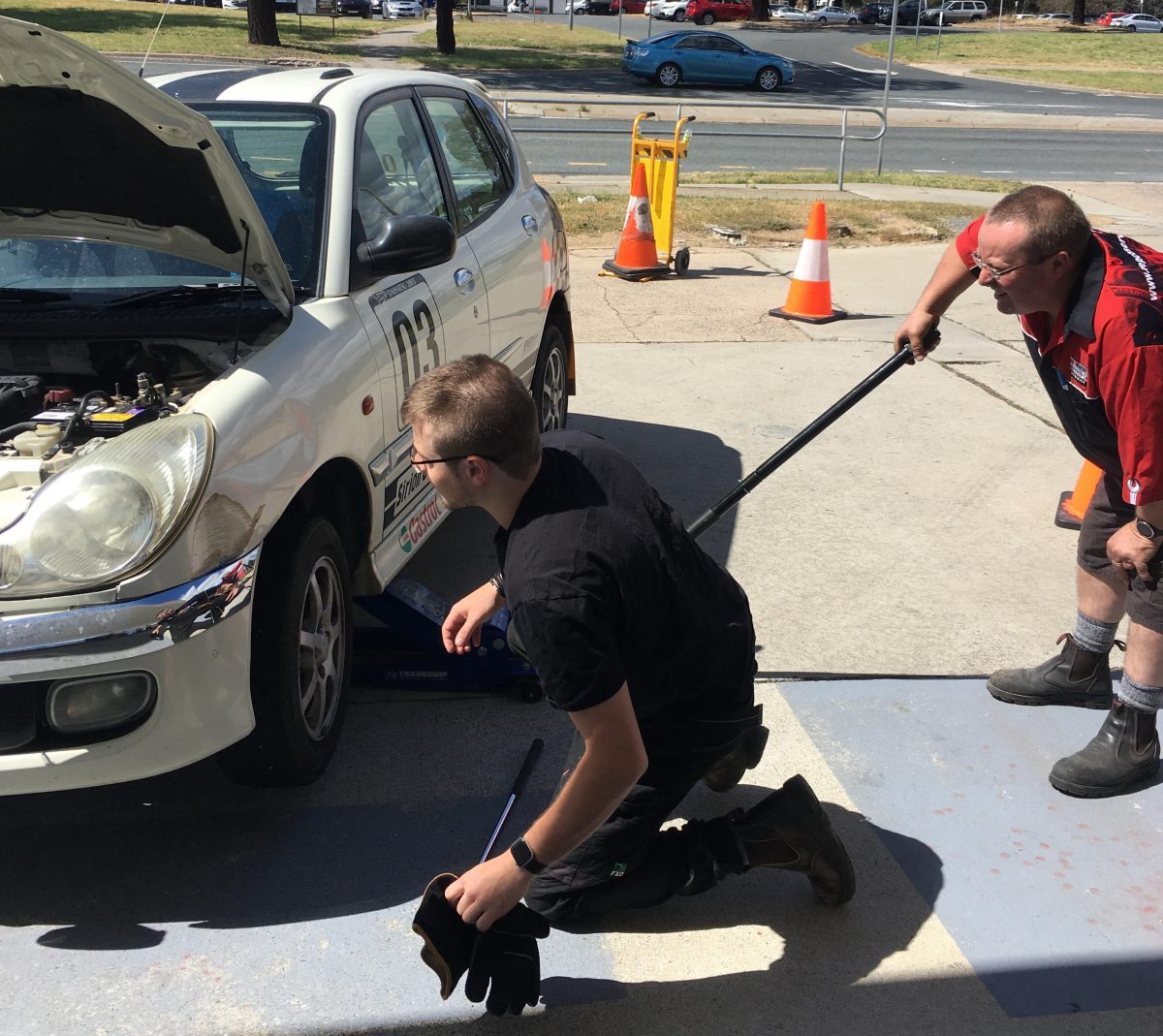 Liam Thornton assesses the situation while a Repco staff member prepares to jack up the car. Photo: Ruth Fearnide.

It was one of Liam’s trickier assignments, not just because of the location.

“When we got there, it was still sitting on the spring of the [passenger-side] wheel, and as we proceeded to extract it, it went further into the car and next to the engine,” Liam said.

That meant removing the wheel and, fortunately, they were in the right place for that.

“The next part was a bit more challenging because there was a bit more of a cover, so we didn’t know if it was sitting directly under that cover or not,” Liam said.

READ ALSO QUIZ: Which came first – sliced bread or toasters? Plus 9 other questions to test yourself on this week

If you are wondering how risky this is, Liam wears a welding glove on one hand that a snake “generally” can’t bite through.

“We put that in harm’s way,” he said. “Once we locate them, we can generally take the glove off and use snake hooks to extract them.”

Liam deployed his not-often-used mini-hook for tight places to get inside the car where the snake was. 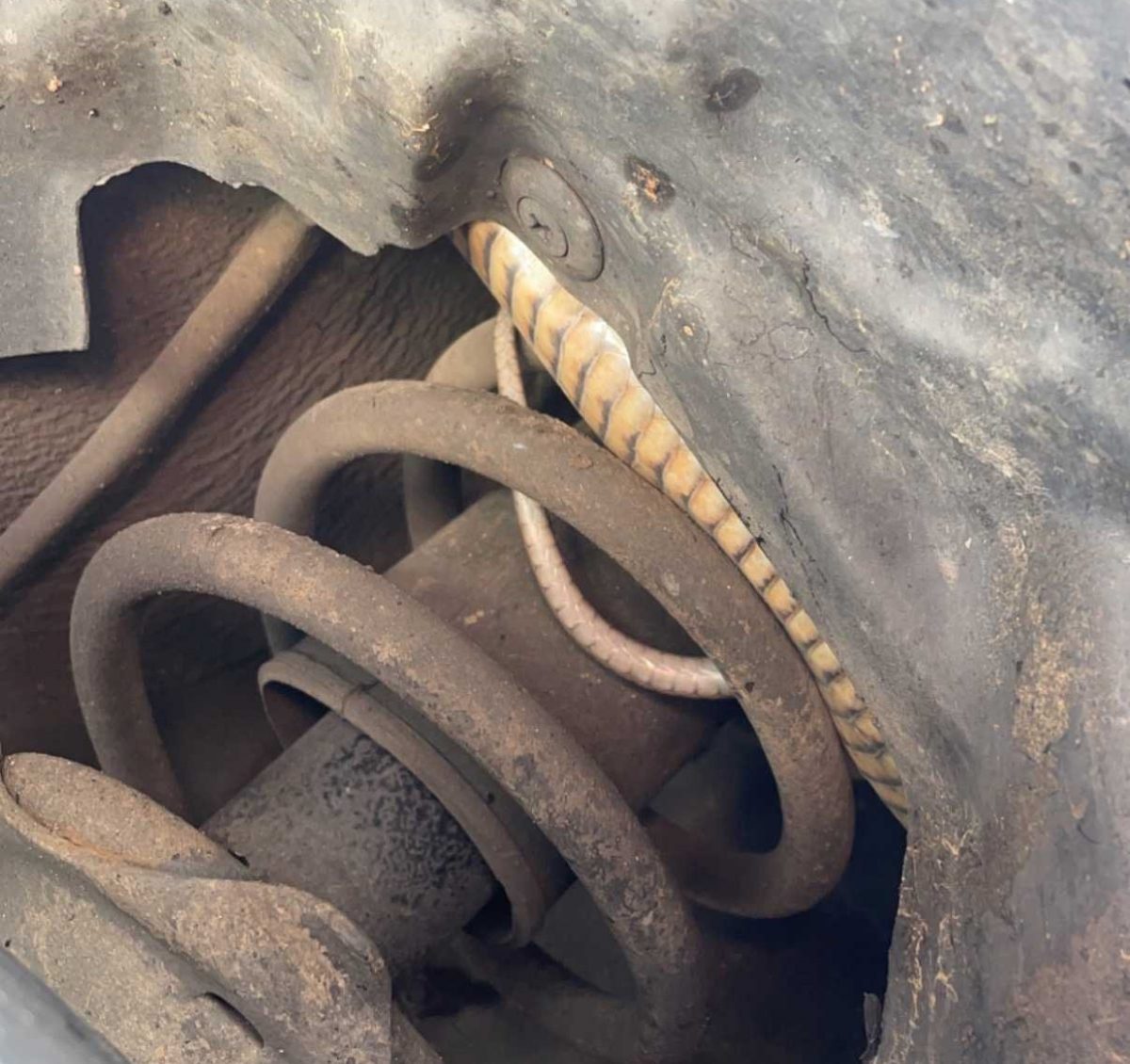 Another view of the snake before it retreated further towards the engine. Photo: Liam Thornton

The goal was to manoeuvre the snake out and get to its tail.

“Once I got its tail, we were pretty certain it couldn’t escape any further,” Liam said.

But the snake had hooked his head around a bit more of the car inside and Liam had to manoeuvre more of the neck and head out.

“Once it was out in the open we were able to secure it safely into one of our safe bags,” Liam said.

He said they usually try to take off, but some were stunned while others could rear up.

“Grabbing its tail is the safest option,” Liam said.

People were right to be wary.

Liam identified it as an Eastern Brown, the second most potent venomous snake in the world. The title goes to another Australian species, the Inland Taipan.

A female that had just laid her eggs, she was 1.4 metres long and had probably come from a nearby residence or bushy area.

Liam said she was likely a little lost on the open concrete surface and was happy to find somewhere enclosed to take shelter.

A grateful Ruth praised Liam, the service station manager for his professionalism, the staff and the other customers who alerted her.

It was fortunate it happened when there were other people around, she said.

“At first, I thought the snake had come from my house in the car,” Ruth said.

“It was really nice the way that the customers around saw what had happened because I could have easily driven off,” she said. 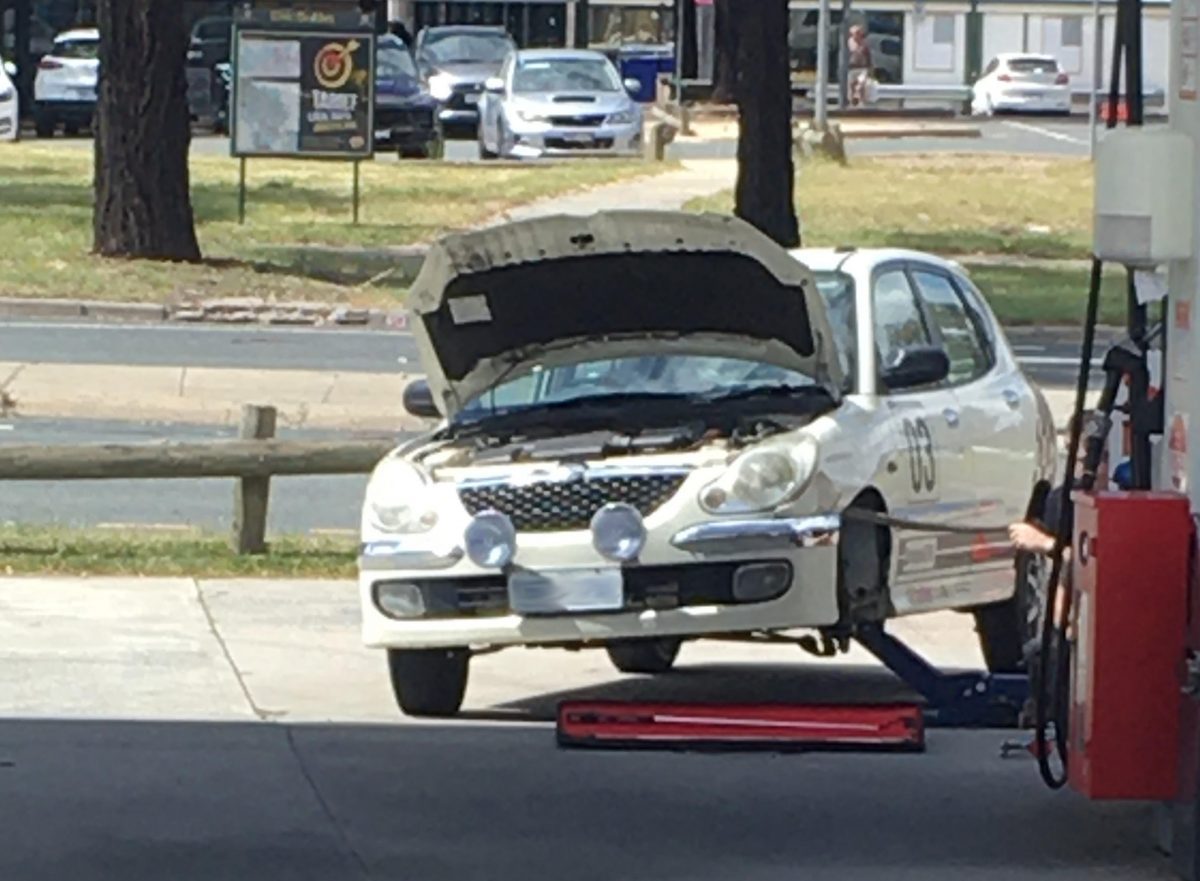 Back at the Canberra Reptile Zoo, Liam microchipped the snake as part of a tracking study run by ANU Associate Professor Gavin Smith before releasing her at an unidentified location.

It’s been one of Liam’s busiest seasons, and the ongoing wet and the mice plague have been contributing factors.

“There’s quite a lot of food out,” he said. “They’re out and about, and they’ll eat anything. They have quite a broad diet.”

His advice to anyone confronted by a snake is to stay still, remain calm and then call a snake catcher if you need to.

“If you’re able to live with the snake near you, the best thing is to leave them where they are,” Liam said.

He said they stay out of your way if not provoked, and there are very few deaths from snake bites in Australia.

“We’re much bigger and taller; we’re much more capable of hurting them quicker than they can us,” said Liam, who has worked with snakes since he was 10.

And no, he hasn’t been bitten (apart from some nips from friendly pythons).

Fun fact, scientists have just discovered snakes have clitoris’s. The female ones, presumably.

I cannot believe how many snakes are around ACT.. then again much bush I guess. Scary🙈

Liz Fizdort it’s about time you had another snake story…

Juliane I have a lot of thoughts about this! First, the unidentified place where it was released was probably Campbell cos that’s what one snake wrangler said about a good release spot (you’ll remember that’s where I lived!). And second, everyone seemed proper scared in this story but at CHH people flocked to see the monster brown which was sneaking up on me. And third, what living hell is that city?!?
😄

Janelle Sweetman Weir I believe this the snake you met….

Ever one wants a free ride

I had a brown snake in my back yard last Saturday. Tried calling 1 Snake Catcher but no answer after several panicked attempts. My son kept watch from the window as I alerted the neighbors. Unfortunately by the time we did get onto a Snake catcher we lost sight of the snake so they said there was no point coming. I am so scared now about my dog getting bitten😩