Cue the cute! A new joey at Tidbinbilla! 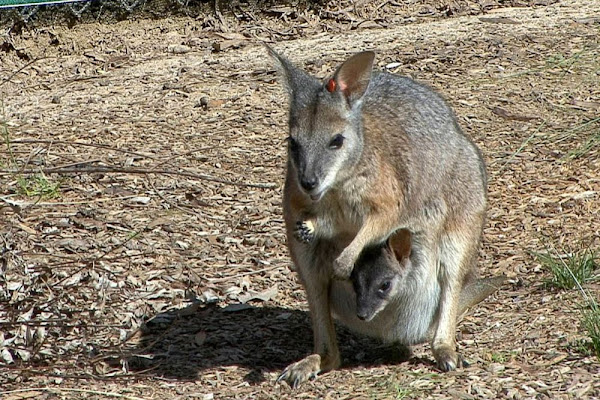 TAMS are celebrating their newest addition at Tidbinbilla:

“Since 2010, 53 Brush-tailed Rock-wallabies have been bred at Tidbinbilla’s Animal Breeding Centre, but none quite like the little joey recently born who has introduced very valuable genetics to the rock-wallaby species,” Mr McNamara said.

“Low genetic variation makes a population vulnerable to inbreeding which can be detrimental to long-term reproduction rates, so it is great to see the management strategies employed by ACT Parks and Conservation now paying dividends to increase overall genetic diversity.

“The recruitment of new genes is one of these strategies, with the father of the new pouch young taken from the wild in East Gippsland, Victoria and relocated to Tidbinbilla in 2012.

2 Responses to Cue the cute! A new joey at Tidbinbilla!
Filter
Showing only Website comments

Mum looks like she could do with a Bex and a good lie down – but yes, very cute!

Natasha Van Oudheusden - 13 minutes ago
Matthew Johnson in that case, yes. I must admit I only quickly scanned through it while waiting for a spreadsheet to update f... View
Matthew Johnson - 23 minutes ago
Natasha Van Oudheusden i think we read into this article differently. The way i’m reading it, if the landlord breaks the re... View
Robyn Baer - 38 minutes ago
Hopefully the wording is written better than their previous amendments. View
Community 14

Jasmine Hawker - 17 minutes ago
Scotty Jeffery Why are we prioritising where the help goes? Yes Canberran homeless people should be getting support but why w... View
Graham Cox - 33 minutes ago
How are we taking these people in when we barely have housing for our current population? Why are non Australians given prior... View
Debora Gyllien - 1 hour ago
and yet some of us who have been living here for decades and searching for support have found none. View
News 1

paulmuster - 17 minutes ago
Sorry to hear about Tahlia's accident and wishing her a full recovery. However, removing the flying fox in light of this inci... View
Property 7

Aaron Nicoli - 5 hours ago
It’s also so much safer now… 60km/h jam brakes on for the camera, accelerate back out to 60… It’s achieved nothing fo... View
Phil Hogan - 5 hours ago
Got to pay for the tram 🙄 View
News 3

Nestled among picturesque gardens, this stone and timber cottage could have been lifted straight from the pages of a children's storybook....
Opinion 30

@The_RiotACT @The_RiotACT
Barb Shannon, from #Bookham, near Yass, may have made hundreds of unique, embroidered heirloom #blankets during the past 50 years, but each one is #special to her and she hopes they will all be loved for life https://t.co/9rxXUtE0yH (47 minutes ago)