Experts in buying, selling & renting
Your property, your future
15 August 2022

Dachshunds by the (almost) dozen keep Louise on a short leash 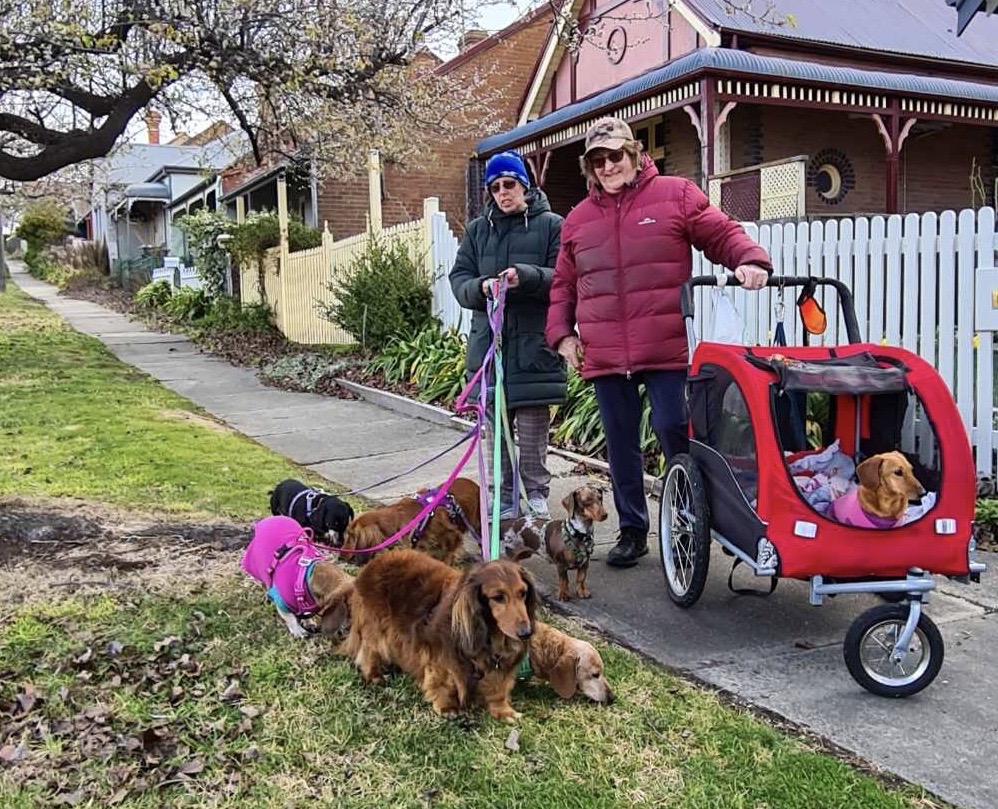 Under a hint of spring blossoms, Margaret Ranger and Louise Gardner with Louise’s family of Dachshunds. Photo: John Thistleton.

Her long-haired, tan-and-caramel coat almost touching the ground, Pippa Girl – an 11-year-old Dachshund – leads a pack of seven other Dachshunds down Cowper Street in Goulburn.

In the pram is Penny, six, who has rare muscular dystrophy. She doesn’t walk, doesn’t have biscuits and is restricted to soft foods because of her difficulty swallowing.

They are out walking twice a day. On icy mornings when the temperature drops to -7 degrees Celsius, older dogs like Tuppie, 14, and Gidget, 13, will sit in the pram with Penny, even though they are rugged up with an extra coat.

Along with Misty, nine, Pepper, three, and nine-month-old Winifred (Winnie), the pack collects Cooper, 11, who lives a few blocks away.

Their devoted owner Louise Gardner has them in a steady routine of rising at 6 am and taking any medications they’re on, and enjoying a liver treat. By 7 am they are on their leashes and ready for walking.

Louise said her dear friend and neighbour Margaret Ranger comes too. Cooper belongs to an older friend who lives several blocks away.

Now retired after a 30-year career as a registered nurse, Louise’s love of Dachshunds began in December 1992 when she walked past a pet shop in Sydney and noticed a sign, ‘Adopt a puppy for Christmas’ and saw Tilly, the dreamy-eyed culprit who stole her heart and changed her life.

“I was naive about dogs but have learned a lot since then,” Louise said. “Once you take them on, you do everything for them within your means. I dreamed of having six children and never had any, so my dogs substituted, and the older you get, the more you let your dogs rule your life.”

With a close friend she came to Goulburn a year after Tilly joined them and she took on her first long-haired Dachshund from breeder Pam Hill of Towrang. More dogs followed, to a total of 10.

They lost their two oldest dogs, Mishka and Liesl, 15-and-a-half-year-old sisters who died in May within two weeks of one another.

“They were litter mates and I’m sure couldn’t live without each other they were so close,” Louise said. “It’s devastating, absolutely devastating. I put my heart and soul into them.”

Each morning their slow-moving walk takes about two hours before returning home for breakfast biscuits. “Then they lob around the house, sleep or go out in the garden while I am doing whatever I’m doing,” Louise said. The afternoon walk is a quick one around the block to ‘get the edge off them’. 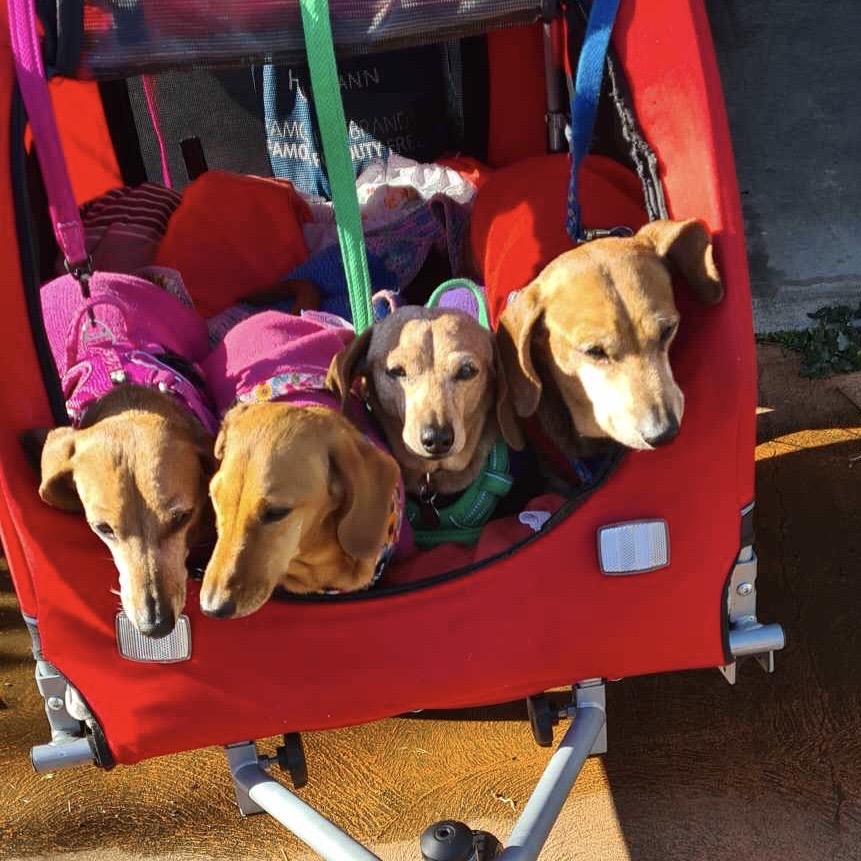 In the pram are Gidget, Penny, Tuppie and Ollie, who joined the pack from a friend’s place for the week. Photo: Louise Gardner.

“I tire them out,” Louise said. “They go for so many walks they get tired. I love walking, my mother loved walking as well. Mum and Dad actually walked their dogs twice a day, so I suppose you do what you grow up with, don’t you?”

She retired from work in 2005 when another of her dogs, Paddy became paralysed. He was the first one in the pram. She completed a dog grooming course and began her own grooming business from home. She has since retired from that too.

Every two or three weeks, she is at the vet’s because as the dogs age, they get more complaints.

“Dachshunds have recently become an extremely popular dog which in some ways isn’t that good because they are fairly high maintenance,” Louise said. “One in four gets a bad back, they are well known for separation anxiety. People think they can get one which will be fine if they go off for work. Well, they’re not.

“I love them all, they are all so different. The long-haired standard breeds are almost like a different breed, they are calmer, they don’t panic as much, they have a more laid-back nature.”

Thanks to her extensive nursing career which began in the school holidays when she was 15, she is more observant of things that go wrong with them. “If they’re sick I am probably reasonably well prepared to look after them and I don’t panic as much. If something happens to them I take it in my stride,” Louise said. This includes helping Penny with a nebuliser twice a day. 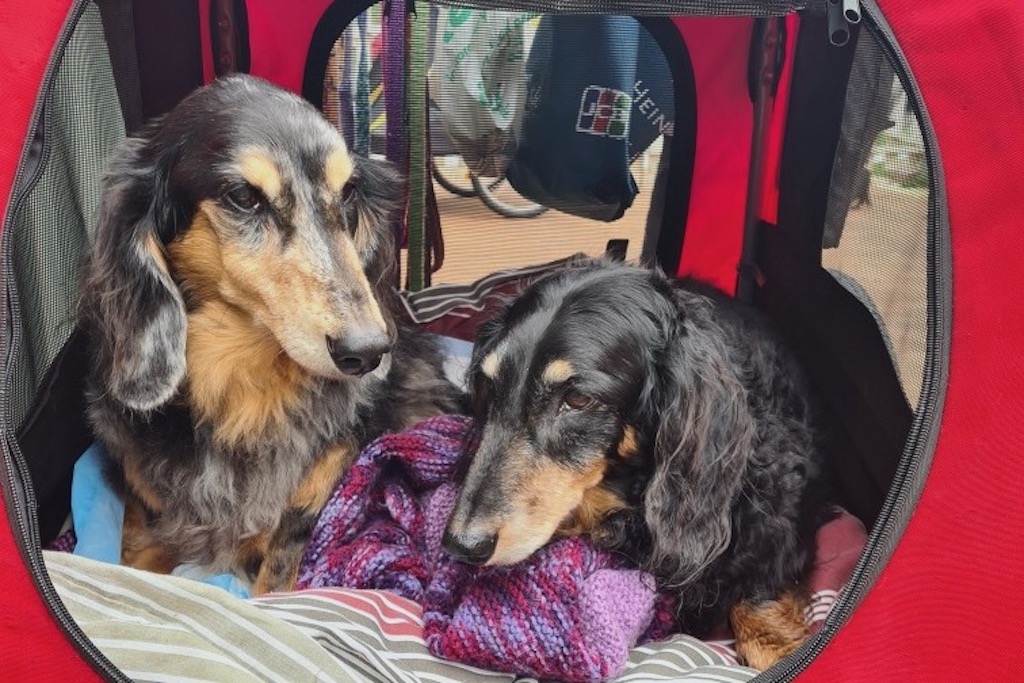 “Because we have had so many over the years, we are up to our 23rd Dachshund, you learn dogs have basically the same conditions as humans, they have cataracts, they get glaucoma, they have bad backs, they get liver cancer, different tumors,” Louise said.

Most of her gorgeous charges have been rescued, or belonged to people with changing circumstances. Whatever the case, they have won the lottery in life under Louise Gardner’s loving gaze.