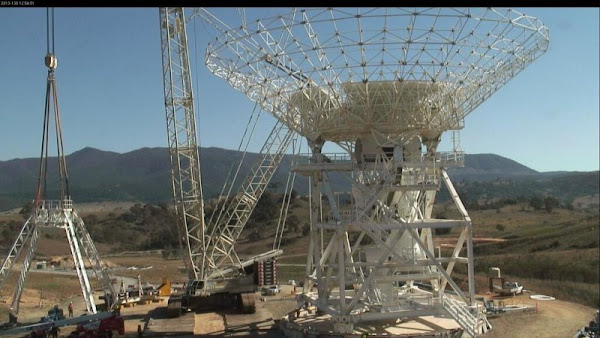 The 34-metre dish took three years to build and will go online in October 2014 in time to help track NASA’s New Horizons mission before the spacecraft reaches Pluto.

It joins the existing 70-metre dish and two other 34-metre dishes at NASA’s only southern hemisphere communication centre.

Project support specialist Tony Ross says the Tidbinbilla site will become more important over the next 10 to 15 years.

“There’s a bit of a wobble in the earth’s orbit and what that means is the southern hemisphere is getting a better look at the ecliptic plane, which is the plane in which all the planets orbit in, which is where all the robotic spacecraft are,” he said.

I hope this will enhance our skywhale detection capability. We don’t need another one of those making it’s way to Earth.

Helen Goddard - 4 minutes ago
Read the article ... that's not the story at all. These people had, like politicians, agreed to isolate for the mandated 14 d... View
Anne Cahill Lambert - 24 minutes ago
We had already agreed to self isolate for 14 days - same as politicians! Except we wouldn't be allowed out to Parliament Hous... View
Anne Cahill Lambert - 25 minutes ago
I've been in NE Victoria where there is no Covid. We go straight into isolation if/when we get home.... View
Sport 11

Chooky Whittaker - 51 minutes ago
Maria Hawke make sure you show all of these comments to dad ❤️ View
Mark Mcconnell - 2 hours ago
Living legend 👍👏💯 View
Erkin Esen - 6 hours ago
Great story , Allen and Maria most beautiful people i ever know ,... View
Community 13

HiddenDragon - 20 hours ago
Following on from the useful perspectives set out in Julie Macklin's comments last night, there are serious traffic issues at... View
show more show less
*Results are based on activity within last 7 days