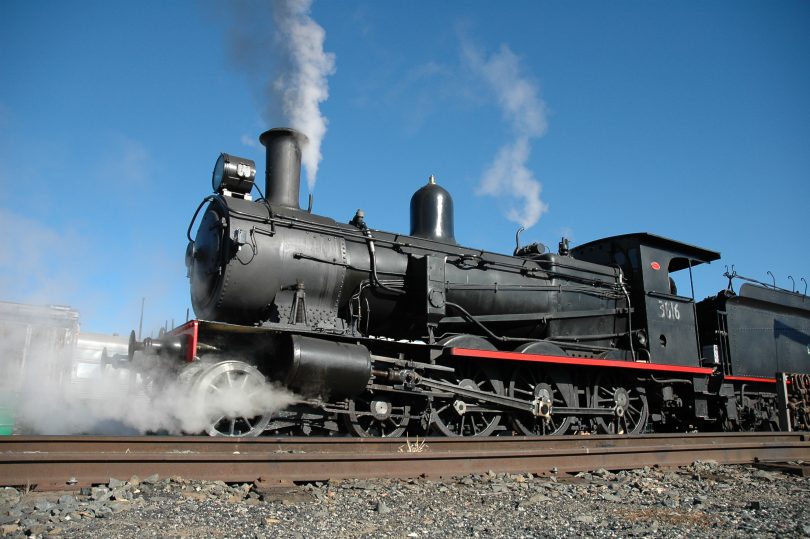 Steam train rides will resume in the future as the Railway Museum at Kingston re-opens. Photo: Supplied.

Canberra’s much loved Railway Museum at Kingston will finally re-open its doors this Sunday after three years of drama including liquidation, a forced stock auction, multiple break-ins and the theft of irreplaceable parts.

But John Cheeseman, who has headed the effort to save the museum with the Capital Region Heritage Rail Group, says it’s all been worth it for the volunteers who have put their heart and soul into saving the site and Canberra’s rail heritage.

“I’m sure there were moments when we all asked ourselves why we were doing this,” he says. “We had a fair few setbacks along the way but we persevered. A lot of it involved negotiating and planning to meet the government’s requirements.

“There was physical work to be done, of course, cleaning up, mowing, fixing the fences and getting rid of asbestos on the site. But there was a heck of a lot of paperwork, too and we are glad to see the back of it.”

Problems for the museum’s previous operators began with the freight company they established to fund the Museum’s operation and the always popular steam train rides to Bungendore.

The company went into liquidation with debts of more than $700,000. Administrators subsequently held an auction to sell off scrap and carriages, to the distress of many longtime Canberra rail fans. Capital Region Rail Heritage was subsequently formed as a registered charity with the intention of rescuing the site and rolling stock.

John Cheeseman, who chairs the group, says more than one-third of the collection has been saved from liquidation, with a strong focus on Canberra’s local rail heritage.

“Some of the rolling stock is still in Sydney but it will be returning in the next month or so,” he says. “We have had lots of support from the Canberra public and even the liquidator was very cooperative and helpful. He worked with us to rescue as much as possible.”

Mr Cheeseman says that many people are unaware of the extent of Canberra’s rail heritage and that was a motivating force for the volunteers who have been working on the site.

“We certainly set ourselves an objective to re-establish a rail heritage presence in Canberra. Towns like Yass and Goulburn, Bombala and Cooma have all got railway museums, but the national capital was missing.

“We have early sleeping cars, the historic 1210 historic steam locomotive that brought the first train into Canberra, and a Southern Aurora dining car among a variety of trains that tell the city’s rail story.”

Mr Cheeseman in unapologetic about the museum’s focus on the capital.

“There is no point having an electric train that ran around Sydney. We want to help people understand the role rail has played in Canberra’s history,” Mr Cheeseman says.

The new museum will be funded by its members. Around 100 have joined so far and Mr Cheeseman says more than half of these have been actively working on bringing the site at Kingston back up to standard.

For the time being, unfortunately, that won’t include running the steam train trips. Mr Cheeseman says they’re taking “one step at a time”. They’re also mindful of the fire dangers during an exceptionally dry season. However, the 95-year-old rail motor is open for inspection, including a driver’s eye view.

“We encourage the Canberra community to visit the Museum at 2 Geijera Place, Kingston on any Sunday between 10:00 am and 3:00 pm and learn more about the contribution rail has made to our region and the nation”, Mr Cheeseman said.

Full details about the Museum are available here.

Jess Bell day out for Arthur?

Yeah agree great news, would have been good if the ACT Gov had stepped in earlier and prevented some of the other engines leaving the territory. This was a fun experience for my kids and I when we used to visit. Watching the restoration for the Garratt over the years and seeing it finally running was great . It was a sad day when after all that effort they let that unique engine leave Canberra as it was such a draw card for train enthusiasts from all over Australia to visit Canberra.

And within 1 day, it’s been vandalised. Someone with a grudge is my bet

Pitty about the highly supicious arson attack.
Who would have motive?

Melissa Bachi - your boys will be happy! 💙

Gemma Rose omg but the trains are all vandalised

John Sands you can take alex at Christmas

Surely it will also be high on your list of holiday attractions?

What a great story to read, can’t wait to come back and visit.

Thats great news !! Why it had to get to that I’ll never know !!! Of all the things the government could spend money on, surely this is one of them !!

Was going to tag you Corey Karl

Michael Uttley we have to do a family outing!

Jess Amber we can visit when you come up 🚃🚃

@the_riotact @The_RiotACT
Did you hear about the bloke who was bitten by a #white-tail spider and doctors had to amputate his leg? It probably didn't happen, but the #spider's fearsome reputation persists without a shred of evidence. Damien Larkins explains https://t.co/5I2pJBKyzw (36 minutes ago)