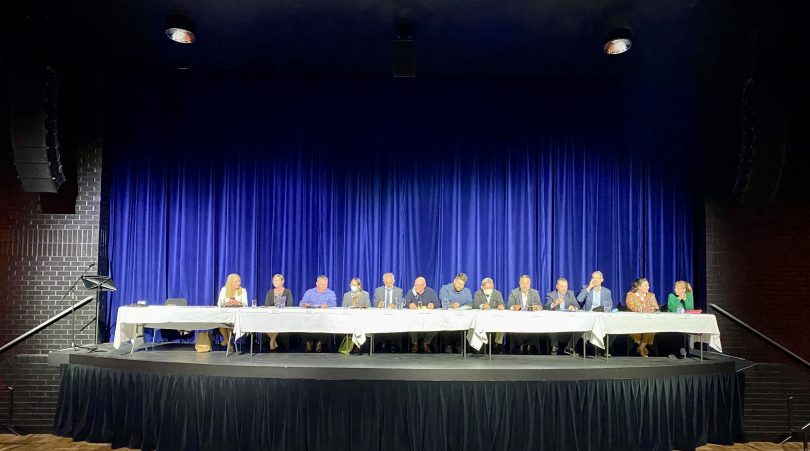 The table of 13 candidates present at the QRRA Meet the Candidates Forum. Photo: James Coleman.

There will be no fewer than 75 names on the ballot when Queanbeyan, Jerrabomberra, Bungendore, Braidwood and all of the outlying towns vote to fill 11 positions on the Queanbeyan-Palerang Regional Council (QPRC) on Saturday, 4 December.

There may be 75 on the ballot, but only 13 took the time to speak to a gathering of around 20 locals at the Queanbeyan Bicentennial Hall earlier this week to introduce themselves to prospective voters.

I am one of the 20, with blazer on back, notebook in hand and recorder on knee.

The 13 candidates – five women and eight men – trickle into the airy auditorium to the sounds of Mayer Hawthorne’s Designer Drug. Liberals, Labor and The Greens are all represented while the rest make up an eclectic mix of independents.

Former councillors and family members of the candidates, as well as Mayor Tim Overall and his wife Nicholle, make up the smattering of attendees. It is also being live-streamed to the Queanbeyan Ratepayers and Residents Association’s Facebook page.

At not a tick past 7 pm, one of the organisers takes to the stage and outlines the rules.

The candidates will have three minutes to deliver a brief introduction. This will be followed by questions from the audience before each of them have a further 60 seconds to summarise their positions at the end. A small dinner bell will ensure order.

Each of the candidates begins their ‘pub pitch’ by expounding on their connection to the local area – where they live, how long they have lived there, what community organisations or initiatives they are involved in, generally filling us in on their CVs.

Without going into each and every one of them, there’s the distinct impression that all of these people have considerable experience on the ground. They’re business owners, residents and general Joe Bloggs who have had their efforts to live their lives and get things done frustrated by the red tape of bureaucracy.

They all echo each other in wanting more transparency and efficiency in council spending and decisions, better roads and infrastructure, and a stronger voice for the myriad smaller towns in the shire that seem to fall by the wayside. 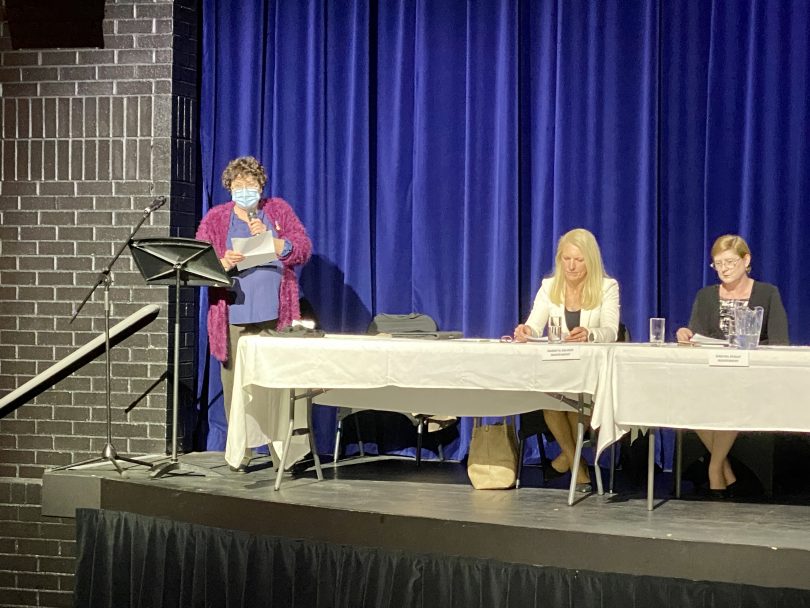 The organisers were clear on the rules from the get-go. Photo: James Coleman.

Climate change came up, too.

Labor’s Bryce Wilson and The Greens’ Katrina Willis argue it is absolutely vital that a shire of 60,000-odd get on board with net-zero emission targets. This – it is said by Ms Willis – will help prevent future catastrophes like the ‘Black Summer’ bushfires.

John Mangos from Group H throws in the fact that he and his fellow candidates are “fair dinkum about change” and are well on their way to installing a public electric vehicle charging station at the Caltex service station in Bungendore, with one coming to Queanbeyan as well.

Once Margot Sachse from Group C had finished divulging how her skills as President of the Jerrabomberra Residents Association will easily transfer to a local government level, the floor was opened for questions.

A man with a striped beanie goes first, enquiring on the whereabouts of the long-awaited Queanbeyan cinema.

There is general confusion from all the candidates as to where the plans for this went, first floated by the Queanbeyan City Council (QCC) before the merger with Palerang in 2017. Current councillor and deputy mayor Michele Biscotti from Group G says that trying to raise a case for such a business in the current pandemic conditions simply wouldn’t make financial sense.

Another hand goes up, this time belonging to a current councillor. The essence of his question is whether or not this next crop of councillors know what they’re getting themselves in for. Will they have the time and motivation to peruse the mountains of paperwork?

There was only ever going to be one answer to this: of course they will.

They also promise that the paperwork – not least of all, development approvals – will jump through all the hoops much faster than it does.

A current Liberal councillor goes next, asking if each and every one of them would be willing to go the hard yards and make the right decision over the popular one.

Much like the future councillors promising to speed-read every document, there was also going to be only one answer to this: all the members of the next council will put honesty and integrity above all.

The answers then all settled down to rates and roads; namely, the appalling state of both.

Many and most emphatically, Mareeta Grundy from Group B, promise to save money by spending money on an internal review of the council, bringing out the magnifying glass to find out exactly where money is going and where it might be going to waste.

An older lady who remembers swimming in the Queanbeyan River when she was younger, surrounded by dragonflies, points out that this is now impossible on account of the levels of pollution in the river caused by muddy backwash off the construction sites in Googong.

Bill Waterhouse, an ungrouped candidate and known locally for his position within the local Wildcare organisation as the ‘Wombat Warrior’, suggests the council sponsor a sort of ‘environment protection agency’ to ensure construction sites are following the rules. The others agree.

By now, it’s nearing 9 pm, so the last question arises from comments on the livestream, and concerns what the future of the ‘Monaro rail trail’ will be. This will see the disused railway line from Queanbeyan to Bombala turned into a recreational cycle path, and is followed by general thumbs-up and nods from everyone, except for Mr Mangos who doubts the numbers will stack up to make it worthwhile.

After two hours of local government in action, I slept very well that night.

To watch the full live stream, visit the Queanbeyan Ratepayers and Residents Association on Facebook.

Miserable lot of wannabees. I’m only voting to avoid a fine. Doesn’t matter who you vote for, rates go up and services go down

Well summed up ! There were more people at the Braidwood MTC.