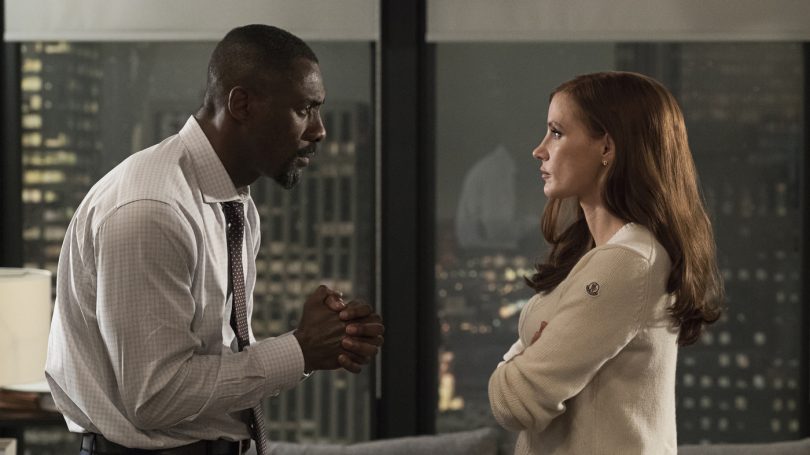 Currently Oscar-nominated for Best Adapted Screenplay, Molly’s Game is the newest true story to receive the big-screen treatment. The directorial debut from acclaimed writer Aaron Sorkin (The West Wing, The Newsroom, A Few Good Men, The Social Network) starring Jessica Chastain (Miss Sloane, Interstellar, Zero Dark Thirty, The Help) as the titular Molly Bloom, is adapted from Bloom’s own book about how she became FBI-targeted following her turn from professional athlete to poker-game-kingpin, or queenpin.

After being thrust headlong into a somewhat frenetic opening sequence which ostensibly has nothing to do with poker – or the rest of the film for that matter – the narrative pace is set. As a writer, the action in Sorkin’s work lies more in his use of words than of images. Naturally. However, Sorkin is more like a speech-writer of films, renowned for the words he puts in his subjects’ mouths. Here, it is this very principle which sets the tone as Chastain skillfully narrates Sorkin’s captivating verbal avalanche in voiceover. Prepare to pay attention as soon as the lights dim – if you can’t hold on during the overture, you might struggle to follow thereafter. And if you know nothing about gambling, or more specifically poker, best to put on that poker face early. I shall show my hand now and declare my own lack of knowledge around the game; Molly’s Game retained my interest regardless.

Similar to Christopher Nolan (Interstellar, Inception, The Dark Knight, Dunkirk) in his approach to audience, Sorkin is another writer/now-also-director who doesn’t dumb down. Each director thus seldom turns in a short script. At a fairly dense almost 2.5 hours, Molly’s Game IS heavily laden with dialogue but, for the most part, it feels necessary and doesn’t smack of speaking down to its audience in its explanations. Bearing resemblance to an earlier Sorkin work, Moneyball (2011), Molly’s Game broaches complex gambling themes and legal jargon which can’t always be distilled into film school 101 theory of “show – don’t tell”. Furthermore, Sorkin’s successful screenplay career has been built on actors’ deft delivery of his cinematic monologues.

Occasional inaudibility is one of the only frustrating things about the loaded dialogue, either due to the soundtrack overwhelming the audio mix, or select characters’ rare under-enunciation. The words in Sorkin’s scripts, whilst there are many of them, are not chosen lightly. As a writer whose defining characteristic is the dialogue he pens, every word counts. Sorkin’s signature style needs stars who can orate and, thankfully, the two crucial characters here can.

His words bloom through Chastain’s Molly, and boom through Idris Elba (Luther, The Dark Tower, Prometheus) as Lawyer Charlie Jaffey. Like Sorkin who has spent years honing his speech-craft through the writing department of The West Wing, Idris Elba honed his own speech-craft (read: accent) through the acting department of one of TV’s most acclaimed shows – The Wire. People still seem to forget Elba is British and again he acquits himself extremely well, delivering some of the most impressive takes and impassioned pleas which have become staple of Sorkin’s often legalese courtroom quandaries.

Molly’s Game also stars Kevin Costner (Hidden Figures, Hatfields & McCoys, Criminal) as Larry Bloom, illuminating the challenges of the Bloom family’s competitive sporting upbringing; Michael Cera (Arrested Development, This is the End, Scott Pilgrim vs. the World) as the unnamed ‘Player X’; and Bill Camp (The Night Of, Loving, The Killing of a Sacred Deer) as Harlan Eustice, highlighting the pitfalls of addictive gambling – albeit somewhat cursorily.

Part courtroom drama, part family drama, part crime caper, part tale of female-survival-in-a-man’s-world. In his first outing as director, Sorkin displays a flair for moving language as much as for the moving image. Overall, Molly’s Game isn’t outstandingly resonant or resoundingly moving. However, it is quality with pedigree. Although perhaps mildly overstaying its welcome yet seeming to wrap up somewhat precipitously in proportion to the rest of the story, the film still has its finer moments. Carried by a magnetic Jessica Chastain, who is accompanied by a chronically underrated and impressively multi-talented Idris Elba, Sorkin’s final outcome proves a satisfying one.

Molly’s Game is fun to play. For the viewer anyway.

3 ½ frozen pine boughs out of five.

Andrea Mya Riboust - 16 minutes ago
Matt the former I assure you 😄 View
The Martini Whisperer - 2 hours ago
Lucky they’re weren’t in Texas. View
HiddenDragon - 5 hours ago
So the Big Merino will be the command HQ for Gilead Down Under - and they said it couldn't happen here......... View
Food & Wine 12