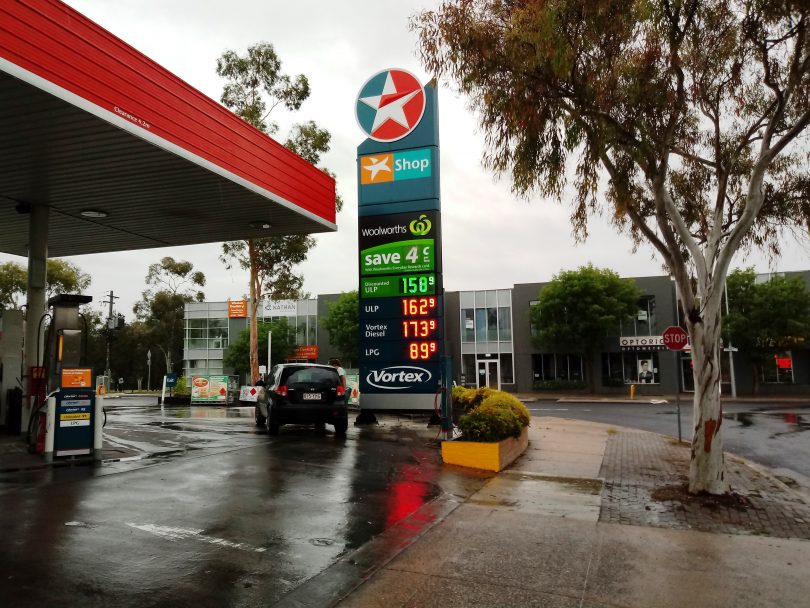 Confusing fuel price boards will be a thing of the past in the ACT with service stations to be banned from displaying discounted prices under new laws to protect motorists from being misled.

ACT Minister for Consumer Affairs Shane Rattenbury said the changes would help motorists make informed choices about where they wanted to fill up.

“We have ongoing concerns that some motorists are paying more at the bowser than they expected,” Mr Rattenbury said.

“Consumers should not be lured into petrol stations by cheap prices which are conditional on having a docket or in-store purchase and have the right to know exactly how much they are going to pay at the pump.”

The Consumer Protection Legislation Amendment Bill 2018, due to be introduced into the Legislative Assembly today, would amend the Fair Trading (Fuel Prices) Act 1993 to ban service stations from displaying discounted prices on fuel boards, such as those that require a discount voucher or an in-store purchase; and require retailers to amend the price of fuel advertised on the fuel price board before changing the price displayed at the pump.

“Up-to-date information about price changes will mean that motorists should never pay more at the pump than the price advertised on the board,” Mr Rattenbury said.

“This is about creating greater transparency in the fuel market, and making it fairer for all motorists who are trying to find the best deal at the bowser. Motorists will be able to determine the real price quickly when driving past a fuel station.”

Retailers will have six months to prepare for the changes once the laws commence. Operators will still be able to advertise a special offer – such as four cents off fuel – but they will not be able to list the dollar amount on price boards.

The ACT Government has consulted with industry and these advertising changes bring the ACT in line with several other States including South Australia, Victoria and Queensland.

“I know some service stations may have already changed their fuel boards in Canberra,” Mr Rattenbury said.

“Depending on market fluctuations, petrol can be expensive in Canberra, making it all the more important that motorists can make informed choices about where they buy their fuel.”

I love signs.. I look before I drive in and I leave if it’s different from the sign..

Chelsea Gibson the worst petrol station in Canberra I swear!!

How about the signs indicate how much of the price per litre goes to the Govt?

Those blokes who did the fuel page a while ago did more than the ACCC or anyone else. Pity they can't do what they used to

Jenny Peterson - seems like someone beat you to it 😂

How about putting the prices down where the actually should be, in line with Sydney!

Can the ACT. Government outlaw the loophole currently allowing gambling venues the right to not pay jackpot wins because of “ machine error”?

That is bs. What about matching the prices nation wise?

If the ACT government wants to increase competition and reduce fuel prices for canberra motorists, they just have to release some land zoned for petrol stations on main arterial roads and make sure it’s available to independent service stations to rent.

It’s worked in other places, Woolworths and Coles won’t be happy however.

The government could also reduce land tax which is passed on to every litre we buy.

I mean, this is Canberra where the wages are the highest in Australia and everyone gets gouged accordingly.

If you are buying a new car for example, the quote in Goulburn for the same car will be about 10% less than it will be in Canberra.

Did you hear the car dealers in Melrose Drive last week saying that their rates had tripled?

Get used to it.

I’m curious as to where what you suggest has been done before?

And I think you and others might be surprised there are a lot more independently owned services stations than you think. In Canberra it is around 25-30%.

That said many independents brand their service stations under one of the big name brands, but are independently owned.

And oddly some of the brands we believe to be independent are not quite as independent as we would think. They are just smaller players but not truely independent. Think United.

Bottom line no easy fix. Biggest problem for Canberra is quite rightly lack of nearby competition plus of course the belief the market can bear a higher cost.

I’m only quoting Andrew Barr on Chief Minister talkback who said we don’t have enough Independents to bring the Petrol price down, and to answer your first question it was Sydney as to where it was done before. I presume it must have been local Council level incentives but maybe NSW state level.

That photo was taken in Weston Creek. I can tell you now, the reason they're doing this.

Yeah higher than most, sure - but comon

I know. Its not our fault all the pollies visit a few times a year.

you know how average wage is worked out right?

Won’t do anything to change the main problem, which is lack of competition. It pays to check the map every time on sites like petrolspy.com.au. Belconnen town centre, for example, consistently seems to be one of the most expensive spots in Canberra.

How about the ACT Govt look at price gouging by the service station duopolies!!! Sydney $1.18c Canberra $1.55?? Oh that’s right we all earn what the pollies earn.

Scott Malpass not much the local government can do. ACCC on other hand.

$1.35 at the airport yesterday. If only people looked harder.

About time. NSW has had this for years. Even when you know they do it (looking at you Woolworths Gungahlin) it’s easy to be confused.

Jon Loiterton indies got pushed out by Woolies and Coles

As Jon said, make sure the big companies can't buy them out for at least 10 - 15 years.

They also should be prevented from advertising petrol that is not available. Twice I gone in for E10 (discounted) only to find none available. Sort of forced to buy the next highest grade.

Sure, sixty cents or so maybe no big deal, but you still feel as though you’ve been suckered in on a false hope.

Arlene Smith - 42 minutes ago
Kathleen Mary Smith Erin Winter in adventure park? View
Bridget Trussler - 1 hour ago
My son many years ago went head into the pole. Please get rid of it before someone is killed...... View
Claire Anderson - 2 hours ago
Daniel, the newer ones really do stop way WAY more abruptly. I too rode the old ones with help of people pulling and never go... View
News 13

Here’s everything you need to know about fuel

@the_riotact @The_RiotACT
Bored with your usual #dining options? Why not try #Ethiopian? There's a reason Ethiopian Down Under is Pearce is a beloved #institution. Let Michelle Taylor guide you on this culinary adventure https://t.co/UZL0Yvgkar (36 minutes ago)