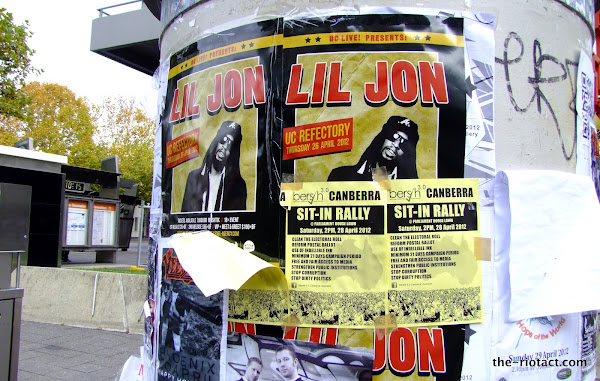 It’s not shaping up as a great weekend to be outdoors. So what’s worth seeing and doing around Canberra this weekend as the wet weather rolls on?

Friday Night at the Potbelly. Featuring:

Oops, forgot to add that ‘Own the Floor’, a dance performance by a number of youth dance groups across Canberra, is on tonight and tomorrow 7:30pm at the Belconnen Theatre. Wassa Wassa, the cast of Ickle Pickle’s new production Sinbad the Sailor, Dynamic Studios, and Folk Festival favourites the Isistars belly dancers will be showcasing their talents. It is free for under 25s and $10 for anyone over that.

Watch this and I dare you not to tap your feet then your leg then start dancing with any animate/inanimate object available:

Wow. You know you’re working too hard, staying up too late and all the rest when you come in to post a gig notice and find you did it seven hours ago.

I’ve updated the post above to incorporate a little explanation for the sound quality of the interview and the reason for the camera shutter click half-way through!

Tickets at the door, or book through http://www.canberratheatrecentre.com.au/site/what-is-on.php?detail=doubt-0224

A review of the show is at: http://www.canberratimes.com.au/entertainment/no-doubt-about-the-appeal-20120416-1x3bp.html

Watch this and I dare you not to tap your feet then your leg then start dancing with any animate/inanimate object available:

a bunch of us oldfarts are going to see The TootToot Toots on Sunday night. Can’t wait, Outlaw is the best spaghetti western rock opera I’ve heard in ages

The infamous Owen Campbell is playing The Phoenix tonight.

So famous that he is ‘in’ as well as famous?

Seriously, go and see him play.

The infamous Owen Campbell is playing The Phoenix tonight.

That picture has Chappelle show skits stuck in my head.

— THE BASTARDS + Critical Monkee + Rather Be Dead @ The Basement

— What’s it Worth: Family & Things @ The Albert Hall

‘Letter from my
father’ Book launch@Paperchain

Titanic at the ANU Arts Centre

Thursday 19th April: Marshall OKell + Special guest TBA, 8.00pm $15
Dedicated to a life on the road, Marshall Okell is known for his crowd-rousing and energetic live performances
as the front man and creative drive behind then crowd pleasing Marshall & The ‘Fro. A band who have ripped
the lips off capacity audiences all over Australia, including festivals such as Byron Bay Bluesfest, Woodford Folk
Festival, Peats ridge Festival, Festival of The Sun and the Optus Gympie Muster to name a few.

Friday 20th April: Heidegger + A Shadowy Interlude shadow puppet show and Sara Vancea. 7.30pm $10
Heidegger are a local quirky folk rock pop four piece. Fronted by singer-songwriter Heidi Gill whose dry
humoured lyrics are propelled out into the cosmos by the backing of an upbeat keyboard and rhythm section,
heidegger tell tales of love lost found and recycled..of sticking it to the man and commenting on the status
quo.

Saturday 21st April: Jordan Millar + Lavers 7.30pm $10+BF
Hes won awards, sold thousands of records, toured with some of the worlds best artists, but still maintains
that the feeling he gets from a room of people watching in pin drop silence as he sings out his songs, is the
most rewarding part of it all. And while the now 25 year old songwriter sits at his desk at his Sydney home
humming melodies and working on his upcoming album, its clear that the love of a life filled with music is
still there. And with that in mind, hes back on the road… Jordan Millar performs live at The Front Gallery in
Canberra on Saturday April 21 and along with Lavers. You will be treated to an incredible night of music and
stories. Tickets from – http://www.moshtix.com.au/event.aspx?id=55638

Pip Cleary - 13 hours ago
We drove down on the weekend and had mobile reception (Telstra) nearly the whole way down. I presumed it was because of the l... View
Ricky Toms - 13 hours ago
Hopefully Vodafone View
Ann Parker - 17 hours ago
A lookout would also be lovely View
News 6

@The_RiotACT @The_RiotACT
The word Eternity is iconic in Sydney, becoming part of Australian folklore when it was beamed to the world in lights emblazoned on the Harbour Bridge during the Olympics in 2000 https://t.co/60k5qLaEKb (43 minutes ago)