DIY Wotz on guide for the weekend of 6 March 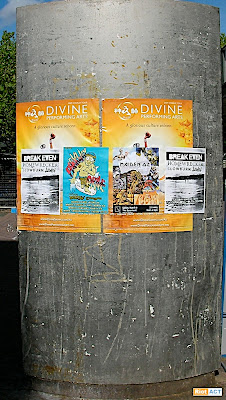 A lot of us are still getting over last weekend and wouldn’t mind a few more nice calm work days before the carnage resumes.

But it seems there’s no provision for extra public workdays, much as employer groups have been lobbying for them.

Moving on, what’s worth getting out to see and do over the weekend around this wonderful autumnal city?

Party in the Park at commonwealth park was great fun for little kids.
Not too crowded, short queues for most little rides and jumping castles, but crowded enough to be festive.

The ACT govt does put on a good family event.
But I think they need to rethink their demographics. They had hundreds of families with prams trying to get into a tent to see Dora the Explorer, and Stage 88 was taken up with a brass band or something.

Not to mention that most people thought Dora was going to be on Stage 88, so there were lots of confused parents telling their littlies to watch the band and Dora would be on soon – meanwhile dora was busily entertaining the screaming toddlers 200m away in a tent.

Listing the times for the kiddie entertainment in the ads or on the website would also help – two year olds have about an hour of good behaviour in them, so young families can’t really just turn up and wander til they find something to watch.

But we had a great afternoon, and people were still coming over the bridge in droves as we left, so it is probably still going strong.

‘THE MIKADO’
is on at Erindale Theatre in Wanniassa. The opening night performance was well received by the audience. It honestly is a fantastic production! Very talented cast with some truly amazing singers.
On until 21st March. Tickets 62474456 or ticketing.philo.org.au

Tickets I believe are $25. Racing from 1pmish.

Gay Mardi Gras televised on Foxtel Main Event (pay-per-view $29.95). Not being shown on free-to-air (except for snippets on the news). Look out for the ACT contingent.

It’s on the poster: this friday (6th March), doors at 8pm, tix $15. The Basement is Cohen Street Belconnen.

Queanbeyan Rodeo, Qbn Showground Saturday. Back again this year, as last year’s was cancelled due to horse flu.

Yep, Rally Canberra for me

Rally of Canberra is on this weekend.
http://www.roc.com.au/

The highlight of this weekend is Celebrate in the Park which is going to be held at Stage 88 between 2pm and 9:30pm on Monday. Headline acts are Jessica Mauboy (5:50pm), Kate Miller-Heidke (6:50pm) and the Hoodoo Gurus (8pm).

The Canberra Festival Balloon Spectacular also kicks off on Saturday, and will continue each morning (6:15am for balloon inflation) until the 15th.

On Saturday you could head north ~100km to Crookwell for the Crookwell Country Festival.

Films at Twilight will be featuring Kung Fu Panda for all those Jack Black fans. 8:15pm Saturday at Garema Pl, BYO Chair.

On Sunday you could check out the Queanbeyan Multicultural Festival which will be held at Queanbeyan Park (Lowe St) between 10 and 2.

Pedal Power is presenting the Big Canberra Bike Ride on Monday. It’s a 15 or 25km ride starting at Rond Terraces (on Lake Burley Griffin at the end of Anzac Pde). Entry is $5 for 12-17 year olds, $20 for adults. Registrations on the day need to be complete by 8:15 for a 8:30am start

The ANU Film Group has, as usual, a packed program. Friday night (8pm) has the double feature ‘Death Race’ followed by ‘The Mummy: Tomb of the Dragon Emperor’. Saturday (6pm) is ‘Bolt’, followed at 8pm by ‘Doubt’.

Sounds like a great weekend, hope you have fun!

It’s on the poster: this friday (6th March), doors at 8pm, tix $15. The Basement is Cohen Street Belconnen.

CMC Rocks The Snowys in Thredbo for me.

The Identical Strangers are playing on the North side for the first time.

They will be at the Canberra Raiders Club at Gungahlin on Friday night, show starts at 9.30

Bellelis Australia - 43 minutes ago
Phillipa Leggo thank you. Can't wait to see you in the shop to show you around 😊 View
May Mac - 16 hours ago
The only reason we switched to landfill nappies was the struggle to keep line dried reusables from stinking of woodsmoke in w... View
Phillipa Leggo - 18 hours ago
Well done Olga Imbriano - lovely article👏👏👏 View
News 3

@The_RiotACT @The_RiotACT
A faster rail connection between the two capitals is long overdue. NSW needs to go all the way in its go-it-alone regional rail plans https://t.co/A0eXTCwFE7 (26 minutes ago)