DIY Wotz on guide for the weekend of 7 August 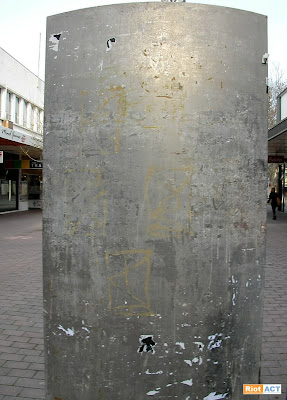 The weekend is a blank canvas my friends!

Is the hockey a licensed event (ie can I drink beer in a big cup)? Serious question – couldn’t see anything on the Kuniggits website.

You sure can mate, upstairs in the bar overlooking the ice.

Simone Penkethman at the bootlegs at the Phoenix on Monday night will actually be Simone and the Soothsayers together on stage for the first time since their Circus Funhouse show for Fronge 08 – they promise to play selected old crap and maybe even something new! http://www.myspace.com/simoneandthesoothsayers

Is the hockey a licensed event (ie can I drink beer in a big cup)? Serious question – couldn’t see anything on the Kuniggits website.

Our local ice hockey team, The Canberra Knights, are playing at Phillip Swimming and Ice Skating Centre on Saturday @ 5.30pm. Tickets are $15ea, and it’s a great spectator sport 🙂

Canberra Philharmonic Society – We would really appreciate 6 to 8 people who can help tomorrow (Saturday) with our upcoming show, West Side Story, set construction as there are plenty of jobs and only two weeks till bump in.

After eight years Settlers is bowing out, and a wake will be held tonight.
7.30pm, Friday 7 August 2009

Come along tonight and bid a rousing farewell to the dedicated band of musicians who have played for the dancers over the years.

Itchy Triggers, Friday night at The Tradies, Dickson from 9pm.

ANU Film group – tonight, it’s Rusty Crowe and Helen Mirren in STATE OF PLAY. Friday night, see STAR TREK followed by Viggo Mortensen in GOOD. Saturday night, NIGHT AT THE MUSEUM 2 is followed by the classic Terry Gilliam film BRAZIL. Wednesday night we have Seth Rogen as the mall cop from hell in OBSERVE AND REPORT. All screenings start at 8pm, membership available at the door from $15, http://www.anufg.org.au

Arc – J-Noir continues tonight, Harold Pinter concludes on Saturday, new seasons on Australian Films 1968-72, Bert Haanstra and Jerry Skolimowski start over the weekend and, if you’re in the mood for Cliff Richard and jiggly bits (not Cliff Richard’s jiggly bits) then EXPRESSO BONGO will fill that need. http://www.nfsa.gov.au/whats_on/arc

And there’s a Q&A preview of BALIBO at Dendy on Tuesday night, but apparently it’s sold out.

Slow Food by the Fireside @ Fireside Festival @ Mount Majura Vineyard
Learn more about local produce and how to cook with it in a series of workshops throughout August. Each workshop matches a local producer with a local chef and what they cook gets matched to the wines. $50/ person includes wine, lunch and recipes! Bookings essential,Starts at 12.00pm.

Oops! Thanks, caf. I got the wrong iteration of DJ’s personas!

(see the web site for the full list of events)

This is the culmination of the weekend-long “Canberrang: Festival of Swing”.

A tenner is not really that hard on the pocket 😉

UG Beats at Transit tomorrow night has some sort of ‘rock’ theme, as opposed to the usual ‘repetitive beats’ theme.

Also Downsyde are at the same venue tonight. You’ll have to pay to get in (a tenner I believe), which is unusual, but there you go.

Skipping Girl Vinegar + Julia and the Deep Sea Sirens (duo) + Jonno Zilber tonight (thurs) at The Front in Lyneham. You might recognise Skipping Girl Vinegar’s tunes from JJJ or commercial radio, it’s a cosy night of alt-acoustic pop. doors at 7:30pm, $18 I think.

Doomsday Festival is $15 not $25 due to a reduction in the original amount of bands that were going to play .

Capital Retro - 1 hour ago
So, it will be called the "Opal of Colour"? Ridiculous.... View
Andrew Dale - 9 hours ago
Rory Bourke I'm both mate 🥸🥴 View
Lucas Anasdow - 12 hours ago
The Left are pushing to have the Event Renamed as the Term 'Black' is deemed to offensive and upsetting for segments of the C... View
News 32

Ashley Wright - 3 hours ago
Jennie Smith vast majority of the tram works were done in the median strip of flemmington road with minimal impact. There was... View
News 5

sisyphus - 4 hours ago
Better still, read some up-to-date peer-reviewed research. That film is primarily attacking historical straw men, presenting... View
jwinston - 12 hours ago
Watch “The Planet of the Humans”, a documentary by Michael Moore, to see the lie of renewables and so-called green energy... View
News 4

JC - 5 hours ago
Actually think you will find this “outcome” actually backs up my comments. Do you think both parties came to a $400,000 a... View
chewy14 - 5 hours ago
JC, The other week you were claiming the silence was due to pending litigation which now as we see (and I said) was false. Th... View
JC - 6 hours ago
Life doesn’t work like that. It’s quite clear that for the last year they have been in dispute with the builder over this... View
Community 20

The Best Car Parks in Canberra

@The_RiotACT @The_RiotACT
Spacey Jane returns to Canberra this weekend, playing two massive shows under the lights of the @canberratheatre. Find the details in this week’s #GigGuide, which features all the best shows in town https://t.co/MNHOt93RAV (1 hour ago)