Dog’s day out – A review 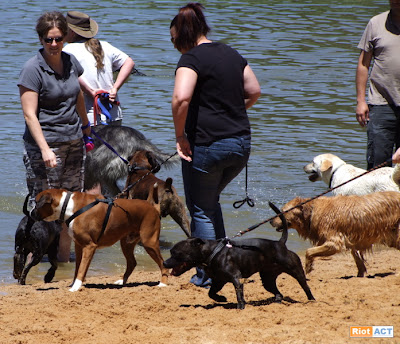 George (the kelpie of few accomplishments), has been, if not good, then at least not particularly bad lately.

So we took him to Lake Ginninderra this morning to check out the fuss of the “Dog’s Day Out”.

From the start we were immensely impressed by the organisation at a free event. Parking marshalls directed us to a free space a very short walk from the park.

The parks around Lake Ginninderra have always, for mine, been some of the most beautiful in Canberra. On a clear, cool day the shaded grounds were filled with happy dogs and their owners.

Some of the flyball dogs appeared to struggle when surrounded by such a large, barking, audience but it all came together in the end. George particularly enjoyed taking his place in the kelpie gallery at the turn, which took a keen interest in proceedings.

On the shore a gaggle of water inclined dogs chased balls and sticks far out into the lake.

George attempted the RSPCA’s obstacle course and predictably failed miserably. He only performs for treats when there’s absolutely no other way to get them and the RSPCA ladies were a soft touch. Even worse the “prize” for finishing the course (having failed all but one obstacle) was the chance to root around in a garbage bin for a hidden treat. (Not a behaviour we normally like to see encouraged).

There were occasional spats of doggy bad humour, but they were few and far between. We only observed one case of a dog owner failing to clean up after their dog.

The Doggachino was a big hit with George (not normally food motivated). The Rotoract sausage sizzle similarly hit the spot with me, and the fairy floss stand did a roaring trade.

It was a really well run event which everyone seemed to enjoy.

Slideshow below, with lots of pictures of dogs, if you’re into that sort of thing.

We took Lilly around the corner, she is tiny but thinks she is a doberman and we didn’t want to shatter her illusions….

Slide #50 – An albino GSP! Wow, I don’t think i’ve ever seen one of those before. A little freaky but quite cool.

Martin McMaster - 4 minutes ago
Who needs to start winning? View
Neil Chandler - 2 hours ago
Peter Bee true, but they produce some great players and there is a fanatical enough fan base that it would be a worthwhile ve... View
Rollersk8r1 - 3 hours ago
Quite happy as a GWS member. In normal times it’s an ideal arrangement. Four games a year at Manuka (1 pre-season), plus AF... View
Property 2

Ian Jessup - 42 minutes ago
Maureen Ryan yeah it is. Both Q and WW punch well above their weight in sport View
Maureen Ryan - 4 hours ago
Ian Jessup that's a bit rough View
News 27

Capital Retro - 59 minutes ago
......"do they look like they are getting married." Anything is possible now, in Canberra.... View
Cheryl Boyd - 1 hour ago
Kangaroos will go into water if they have been bitten by a snake. Hope it was taken to a vet to get checked over. View
Property 15

Futureproof - 1 hour ago
Ditch Facebook and you will be much happier. Facebook is a morale vampire... View
Sam Oak - 1 hour ago
The majority of Canberrans either have moved from interstate or have links such as family in other states. It already became... View
Spiral - 2 hours ago
" I find myself itching to take my mask off while walking the dog, especially as the weather gets warmer." Feel free to do so... View
News 122

Craig Webb - 1 hour ago
Greg Donoghoe thats well and truely faster than an old plastic cab with a gardiner straight 8 in it! View
Greg Donoghoe - 2 hours ago
Yvoir Hingee maybe you need to give it a try now. Very enjoyable way to travel to Sydney. No traffic to put up with & very co... View
Leon Arundell - 2 hours ago
The Jolimont Centre is a multi-modal public transport hub, in the city, with excellent connections to the Parliamentary Zone... View
News 16

RSPCA’s Pets of the Week – Buddy and Porky

The pawfect way to end Floriade 2019

Teaching working dogs to win across a scorched, burned land

@The_RiotACT @The_RiotACT
A Kambah pizza bar has been identified as a close contact #exposure site in the latest list from @ACTHealth, while supermarkets across the ACT are named as #casual or monitor for symptoms sites https://t.co/LKRHn7xAFZ (41 minutes ago)

@The_RiotACT @The_RiotACT
Zed Seselja's Senate seat may be vulnerable, according to new polling from the @TheAusInstitute, but ousting him will be a big ask https://t.co/0HDjhrW54O (42 minutes ago)