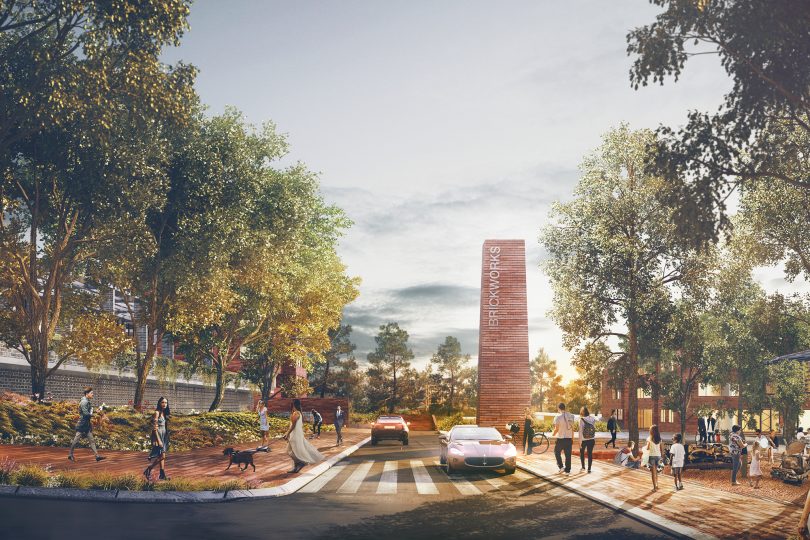 An artist’s vision of how the redeveloped Brickworks site might look. Image: Supplied.

After long delays, the redevelopment of the Yarralumla Brickworks will finally proceed, with news that the Doma Group has signed an agreement with the government two years after winning redevelopment rights to the heritage site.

In May, the government lodged a development application for an access road to the site, signalling that the process was moving towards the construction phase for 380 new homes among the heritage buildings.

Prior to that in January the Suburban Land Agency had requested a review of the tender. This followed the demise of the trouble-plagued Land Development Agency and the reallocation of development responsibilities for the Brickworks to the SLA.

The designated development site was originally much larger at 49 hectares, but plans for an 1800-home development were scuppered after the National Capital Authority raised concerns about access to Government House.

The site now covers around 16 hectares and is home to a critically endangered species, the golden sun moth, as well as threatened natural temperate grassland. It’s anticipated nine trees will also be removed to make way for the development although an Environmental Impact Statement is not required after Environment Minister Mick Gentleman, who also has responsibility for Planning and Land Management, granted an exemption earlier this year.

The Brickworks opened in 1913, producing the iconic Canberra Red bricks used to construct many of Canberra’s early buildings. The original brick kilns were built according to Walter Burley Griffin’s designs and intended to sit unobtrusively below the level of the treeline.

But increased housing demand after the Second World War required increased production. A 46-metre natural-draft chimney was built for the new kilns and remains visible. After the Brickworks closed in 1976, debate raged over the site’s future while a number of artists used the spaces as an informal studio colony.

Following the decision to develop the Brickworks, there’s also been considerable concern over access and the increased volume of traffic the housing will generate.

However, the announcement by Rachel Stephen-Smith, the Minister for Urban Renewal, clears the way for Doma to begin more detailed design work and carry out public consultations. Doma must fit its plans within a heritage framework and all heritage sites must be conserved at their cost.

Some of the brickwork kilns will be retained for commercial and retail use and there are plans to restore others. Early in the process, the developers said that an arts and crafts precinct was being considered and a museum telling the site’s story has also been flagged.

Doma’s plans at this stage include a mix of individual houses, terraces and apartments. There are plans for a public park and a lake, and Doma says they intend to achieve a 5-star Greenstar Communities rating.

“We will create a modern, environmentally conscious village in Yarralumla,” David Carey, Doma’s Senior Development Manager for the project, said.

“Canberra has very few interesting industrial spaces, but the kilns and associated buildings present an amazing opportunity to be repurposed and enjoyed by the public,” Doma director Jure Domazet said in a statement.

“The scale of the site allows us to approach the Brickworks as a landscaping project that happens to include beautiful, boutique, low-density dwellings. A significant proportion of the site will be earmarked for parks, green space and a lake that will be accessible by all, not just precinct residents.

A community engagement plan will be developed with the Suburban Land Agency and Doma says the previous consultation with interested parties will continue throughout the development.

Typical of this government. Gotta be seen virtue signalling emission free future and head towards taxing people for using cars (cuz that means more money for them) but doesn’t mind cutting down all the trees to make way for the train or giving the go ahead to let them build on an endangered species site 🤔

Don’t worry about the critically endangered Golden Sun moth, which has a significant habitat at the Brickworks about to be flattened, bulldozed and torn up.
The GSM has the protection of the Greens and will spontaneously regenerate itself in a designated offset site somewhere else.
Anyway, it’s just a moth and who cares if under our watch it is driven to localised extinction.

How is an EIS not being required a bigger question for this development? If it has endangered flora and fauna, removal of native vegetation and heritage recognition then there is no reason a government should be allowed to remove the need for an EIS over a site.

Tan Choi Heng next time you are here I will take you to the site. The brick works plays a strong part in the naritave of Canberra.