Old dog given new life thanks to ANU artist 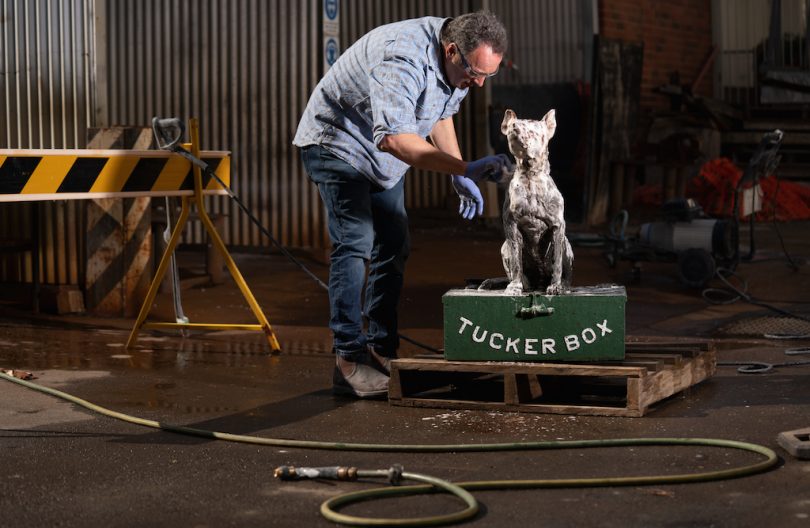 Nick Stranks from the ANU School of Art and Design works on the Dog on the Tuckerbox statue. Photo: Lannon Harley, ANU.

The 80-year-old Dog on the Tuckerbox is once again being given a new lease on life thanks to an artist from The Australian National University (ANU).

The statue was vandalised on Saturday afternoon, 27 July. The dog and tuckerbox were dislodged from the base of the statue, falling into the surrounding fountain, knocking off an ear in the process.

Two days later, a 28-year-old Wagga Wagga man was taken into custody at Wagga Wagga Police Station and charged with one count of destroying or damaging property.

To celebrate the return of the cherished dog, the Gundagai Visitor Information Centre is hosting a welcome home party this Saturday from 9 am to 1 pm with a great line up of entertainment, market stalls, live music and more.

Mr Stranks said working on the old dog was a job that posed some unique challenges.

“The work has a significant history. It’s over 80-years-old and it’s had a number of lives in that time,” Mr Stranks said.

“There is evidence that the dog had been vandalised and repaired in the past, it’s been moved, it’s been altered. For example, the original ‘droopy’ ears were apparently replaced at some stage. I thought it was really important that we recognise and respect those layers of history.

“Some of the most recent repairs were done locally in Gundagai and I thought it was important to retain those as well, especially considering it was a local artist who created the work in the first place.”

The repair work being done at ANU involved several intricate steps, including cleaning, repairing, colouring and sealing it with a museum quality wax.

“The idea is to mask some of the really obvious damage, which is distracting. I don’t want people to focus on a shiny repaired ear. I’d rather them see it as a whole work.”

The repair is being done at the request of Cootamundra-Gundagai Regional Council.

While some of the hurdles Mr Stranks has had to overcome are artistic, others are more practical.

“Before I did anything I wanted to send it back to the council to get approval because they’re the custodians of the work.

Despite looking a little worse for wear, the Dog on the Tuckerbox still managed to make a grand entrance when it arrived at ANU.

“It arrived on the back of a ute. I think there’s something really ironic and beautiful about that, I thought it was really nice,” Mr Stranks said.

The statue’s won over plenty of new fans during its time on campus.

“Some of our students weren’t aware of the story of the Dog on the Tuckerbox at all. On the other hand, we had a student who lived in Gundagai and was really concerned about it,” Mr Stranks said. 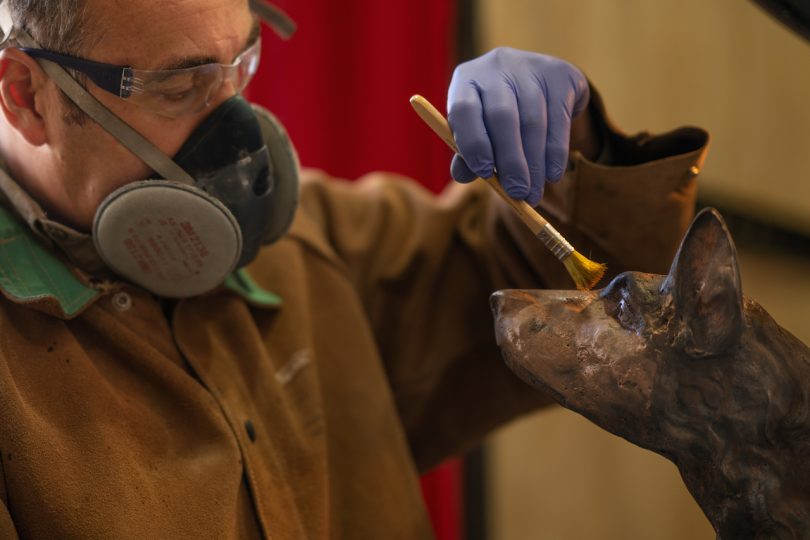 Nick Stranks from the ANU School of Art and Design works on the Dog on the Tuckerbox statue. Image: Lannon Harley, ANU.

The Dog on the Tuckerbox will return home to Gundagai later this week ahead of this Saturday’s welcome home party. Headlining the live music is Melbourne-based singer-songwriter and 2019 Tamworth Golden Guitar Awards new talent of the year winner, Andrew Swift.

“It was extremely disappointing to hear that my good friend, the Dog on the Tuckerbox, was badly vandalised in a cowardly act,” Swift said.

Swift regularly stops to visit his mate on the tuckerbox every time he passes by and set up an online fundraiser for repairs and CCTV for future security.

Other features of the day include local markets and stalls, rock climbing and face painting.

The rest stop near Gundagai is an iconic location for a family photo on a road trip between Sydney and Melbourne. The bronze statue was inspired by a 1850s poem about the bullock trains that traversed regional NSW. It commemorates the early settlers and was immortalised in Jack O’Hagan’s song Dog on the Tuckerbox.

You can find out more about the Dog on the Tuckerbox welcome home party by calling the Gundagai Visitor Information Centre on 02 6944 0150 or by emailing info@visitgundagai.com.au. 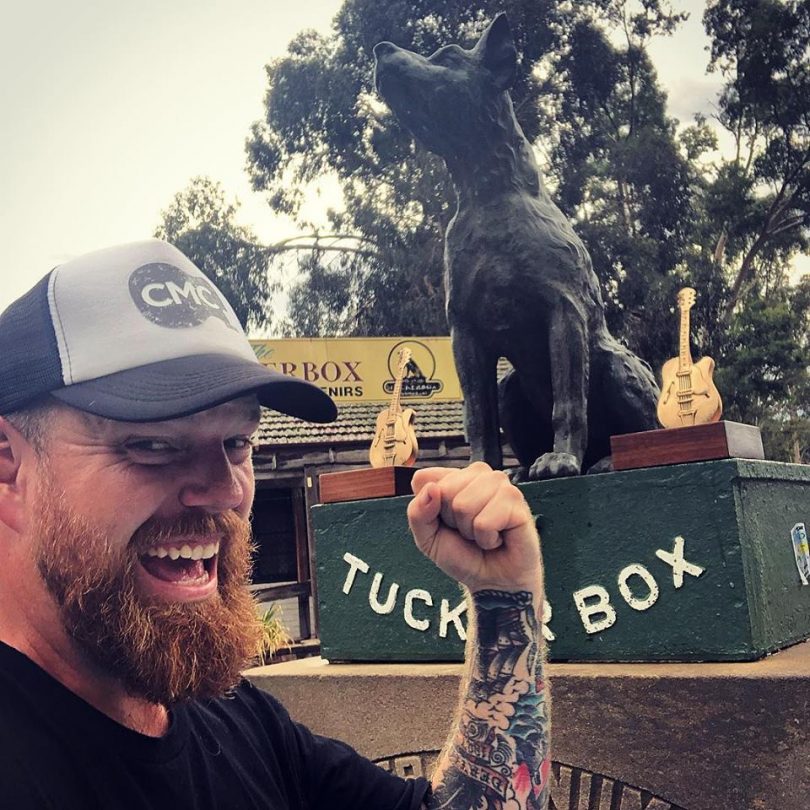 Country music star Andrew Swift regularly stops to visit his mate at the Dog on the Tuckerbox and will perform there this Saturday. He is pictured with his two Golden Guitar awards from this year’s Tamworth Country Music Awards. Photo: Supplied. 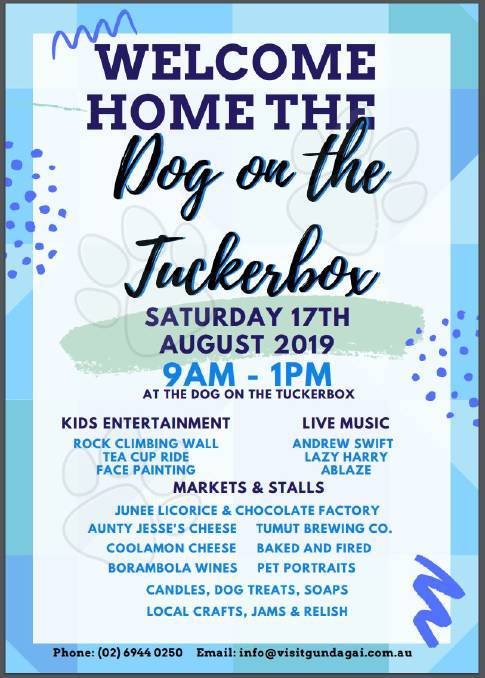 A welcome home party is happening this Saturday for the iconic Dog on the Tuckerbox near Gundagai.