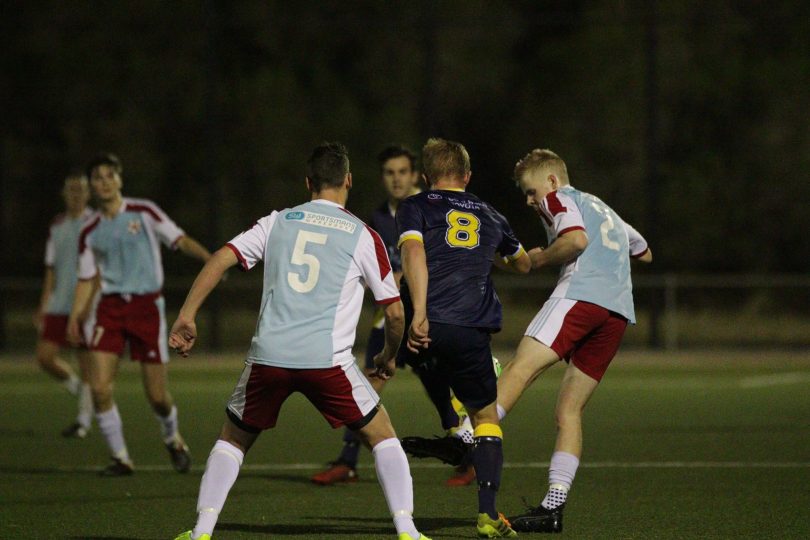 Southern Tablelands United are appealing the decision that saw them booted from the 2018 FFA Cup for fielding an ineligible player during their round three match on Tuesday night.

United defeated Woden Valley 2-0 on Tuesday night (3 April) to claim a spot in the FFA Cup fourth round, but Woden progressed after lodging an appeal.

Woden Valley claimed that Southern Tablelands fielded a suspended player and were, therefore, ineligible to progress to the national round.

In a dramatic twist, United are appealing that decision, claiming their player served his suspension by sitting out of a trial.

The victor of the battle off the field will face the O’Connor Knights as the fourth round draw took place on Thursday afternoon (5 April).

Canberra Olympic will be aiming for a third straight trip to the FFA Cup national round when they begin their campaign against the Cooma Tigers.

The Riverina Rhinos will host the Monaro Panthers and Tuggeranong United will take on Woden-Weston in the other two all-NPL matches.

Matches for Round 4 will be played through the month of April and can begin as early as next week.

Following the draw, clubs can begin planning their matches through consultation with their opponents and Capital Football.

*The result of Southern Tablelands v Woden Valley is currently subject to an appeal, as such Ball no. 6 in the draw was Team TBC and will be decided based on the outcome of that appeal.

1967 - 3 hours ago
Yup. Hospital cleaners should be paid more. But, One of the mote concerning tbings in this article is that the drivers are on... View
Acton - 4 hours ago
Why the silence and inaction from the Greens/Labor ACT Govt? Why is this newly elected government doing nothing to resolve th... View
Community 22

Clare Jones - 6 hours ago
Why say these are open when the two we've been to still have temporary fencing and one even still had a tractor inside the fe... View
Business 5

Tennis ACT - 7 hours ago
What a great achievement Snedden Hall & Gallop! View
Martyn O'Connell - 20 hours ago
the 333 bus painted up to look like the XPT View
Katy Did - 21 hours ago
I loved that tram when I worked in Civic View
Opinion 16

Rodney Thompson - 9 hours ago
Someone who actually deserves a payrise. View
Opinion 55

Ashley Wright - 9 hours ago
Chris Olsen actually Clinton was right. William Hovell drive had the limit lowered between Coulter Dr and Bindubi street beca... View
Tolga Altinbas - 12 hours ago
Because one is a roadwork sign. And the other one is always there on the pole View
Wang Chow - 13 hours ago
My guess is that they changed the speed limit in Chisholm/Richardson because its cheaper than putting in more speedbumps that... View
News 21

Darron Marks - 16 hours ago
"But in this world nothing can be said to be certain, except death and taxes" View
News 4

Bill Gemmell - 16 hours ago
Additional well-located transport infrastructure is a plus. However, maybe they should be thinking about covering these with... View
Greg Batten - 19 hours ago
Great idea for both ACT light rail and bus networks. View
Ashley Wright - 21 hours ago
Justin Watson it is, the article has that a bit wrong as the “new” stop is at Sandford Street intersection about 1km away... View
Opinion 22

Julie Macklin - 18 hours ago
Many other countries don't have the unpopulated distances that we do. It's a different matter driving an electric car in Euro... View
Lifestyle 1

@The_RiotACT @The_RiotACT
Experts advise people living in the ACT & surrounding regions to be on high alert for grass & crop fires this summer https://t.co/g2KJ0Yo9nP (1 hour ago)

@The_RiotACT @The_RiotACT
The ACT has adopted the new three-tiered Australian Warning System. Find out about the new symbols and what they mean https://t.co/14KXL4E4NZ (2 hours ago)

@The_RiotACT @The_RiotACT
In a horror year that’s brought almost every catastrophe to our door bar locusts, the disruption of Canberra's garbage collection services is probably not a big deal, writes David Murtagh – except it is https://t.co/KCu20ZKXYP (4 hours ago)