Divorced father-of-one Jae-Ho Oh, 56, was murdered at his home in Gungahlin in March 2019. Photo: ACT Police.

The drinking “friend” of Gungahlin man Jae-Ho Oh has denied murdering him after the pair had a late-night fight on Canberra Day 2019.

Joshua Higgins, 32, pleaded not guilty to murdering the divorced Korean father-of-one when his trial began in the ACT Supreme Court on Wednesday (3 March).

He has been accused of stabbing his alleged victim 14 times in the neck and back, as well as bashing his face with a soundbar speaker four times after the pair had a fight at Mr Oh’s one-bedroom home on 11 March 2019.

During the opening addresses, prosecutor Trent Hickey said when police entered the home early in the morning they found the 56-year-old with a “substantial” amount of blood on and around his body as well as a black television sitting on top of him.

Mr Hickey said the day before the attack, Mr Higgins had asked to stay at Mr Oh’s townhouse because he had been kicked out of his parent’s house after losing $300 gambling.

He said data from Mr Oh’s phone showed after 1:30 am he had watched a YouTube video in Korean on how to stop smoking, which was the last video he watched because “moments later the accused had stabbed him to death”.

He said Mr Higgins allegedly told police he went to sleep on 10 March and woke up with Mr Oh lying on top of him.

“He was on top of me, and I don’t know what he was doing,” Mr Higgins allegedly told police.

Mr Hickey alleged Mr Higgins assaulted his friend, in what could be seen to be a “sustained and frenzied attack”, with the injuries on Mr Oh’s right arm appearing to be bite marks.

After the fight, Mr Higgins left the house and ran down the street calling out, “help me, help me”, and when police arrived and questioned him, he allegedly said: “My friend came at me with a knife and I took it off him.”

Mr Higgin’s barrister Kieran Ginges said it was not in dispute that the pair had been friends for years and drank a lot of alcohol together, including over 10 March before they had a “physical altercation” that ended with Mr Oh receiving stab wounds.

He also said it was not disputed that Mr Higgins had used methamphetamine, commonly known as ice, on 9 March and did not sleep from then until he went to bed on 10 March.

But Mr Ginges said after Mr Higgins went to sleep, Mr Oh woke him up, then what Mr Oh “did or said” led to a fight between the two before Mr Oh became angry and grabbed a knife.

He said Mr Higgins defended himself and managed to take the knife himself.

Mr Ginges said when Mr Higgins ran from the home that night he was seen by witnesses to be “fearful and scared” and was looking behind him as if he was being pursued.

Mr Hickey told the jury the case would not be like an episode of a TV show like CSI: Crime Scene Investigation, and there would not be one piece of evidence that would prove the Crown’s case.

“This case isn’t going to be solved in 60 minutes or so. There’s not going to be some fantastic piece of evidence leading to a dramatic confession,” he said.

He said it would be the multiple pieces of evidence heard together that would establish the defendant’s guilt.

Mr Higgins, a tall man with brown hair wearing a purple shirt and black tie, only spoke to confirm his not guilty plea.

The jury trial sits before Justice John Burns and is expected to last for three weeks. 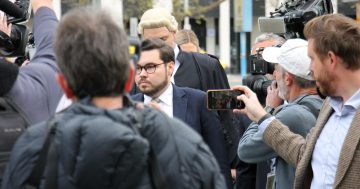