A violent crash on a busy Canberra road has had life-long consequences for a victim pulled from the mangled wreckage, while the driver who caused the tragedy has himself been left legally blind by the collision.

Brent Andrew Dopson, 29, was driving on William Hovell Drive on 12 October 2020 when he swerved across double lines head-on into an oncoming car.

Dash-cam footage screened in the ACT Magistrates Court showed the two cars smashing into each other before being thrown across the road, forcing other vehicles to come to a stop around them.

In a statement read to the court, the crash victim said she had been driving to work that morning after picking up an extra shift, taking her puppy with her, and remembered thinking it was busy on the road.

“The next thing I know it was three days later and I was flat on my back on a hospital bed,” she said.

Fortunately, the puppy survived because it was in the back in a transport cage and the “lucky little sod got away without a scratch”, the court heard.

However, the same could not be said for the crash victim. Her mother told the court she suffered from “trauma on trauma”, with 11 body areas receiving fractures – including facial bones, ribs, sternum, tibia and wrist – along with spinal cord damage.

She underwent eight surgeries, spent two months in hospital and had 70 pieces of metal installed in her body.

“How do you describe in a few words how broken your only child has become?” the clearly emotional mother said.

“[Her] life has changed forever.”

Unable to do many of the activities she once enjoyed, the victim said the worst part was seeing her two dogs go to waste and get bored.

“As a working dog handler, there are few things that are worse than the feeling you have let your dog down,” the court heard. “I can’t explain it to them and it breaks my f-king heart every day.” 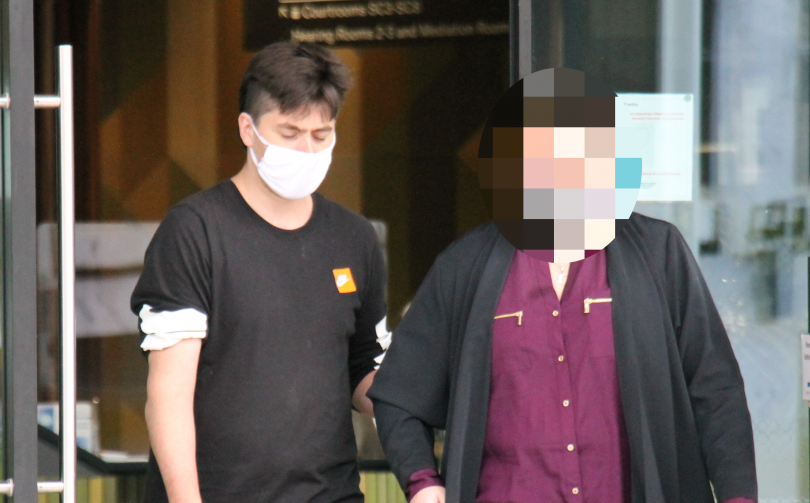 Dopson’s Legal Aid lawyer told the court that at the time of the crash her client had not been looking up for a moment, but his inattention was only for a short period of time.

She said it took four attempts to resuscitate him after the crash. He spent one month in a coma and suffered cortical blindness among other injuries.

Magistrate Peter Morrison inferred Dopson “inexplicably” veered across the road into oncoming traffic and that for whatever reason he had looked down and not where he was going.

He said both the victim and Dopson had suffered from “serious and life-changing injuries”, but “the reality is it was your negligence that caused the injuries to both of you”.

Magistrate Morrison said if it wasn’t for Dopson’s injuries, he would have had no problem with sending him to jail.

Dopson, who is from Latham, pleaded guilty to a charge of negligent driving occasioning grievous bodily harm.

He was sentenced to four months’ jail, fully suspended for a 12-month good behaviour order.