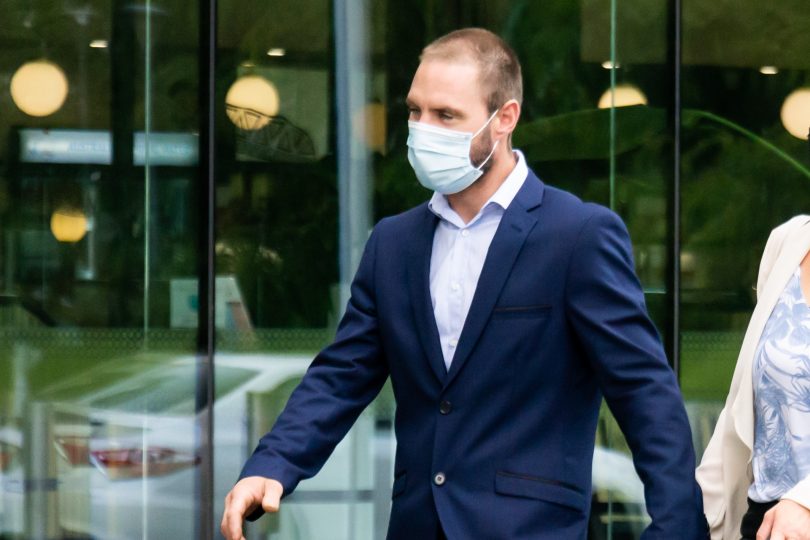 The fact the speeding driver who had meth in his system when he caused the death of disability advocate Sue Salthouse has been arrested again for alleged drug driving is “staggering”, a Supreme Court judge said in court today (15 July).

Mitchell Ryan Laidlaw, 35, was scheduled to be sentenced today but had to appear via audio-visual link from Canberra’s jail because he has been arrested for new alleged driving offences, including a count of drug driving.

He has already pleaded guilty to a charge of culpable driving causing death from when he crashed into Ms Salthouse’s motorcycle on 20 July 2020 and to a charge of drug driving.

The latter charge relates to Laidlaw telling police he had three puffs of methamphetamine at a house party three days before the crash.

On Friday, Chief Justice Lucy McCallum said it appeared he had allegedly driven with methamphetamine in his system after being told his driver’s licence was cancelled and after hearing Ms Salthouse’s family discuss their heartbreak at losing her.

The court had heard from family members like her daughter Luisa Fearnside, who told Laidlaw: “You robbed Canberra and Australia of a fierce advocate for women and people with a disability.”

Ms Salthouse’s sister Jane Taylor said at the time: “Nothing and nobody can replace who she was to me, and the gaping hole of her absence will impact me all my life.”

Laidlaw copped a verbal battering over his recent alleged behaviour, with the chief justice saying he claimed it was “bad luck” he’d used meth just the once before causing the crash that killed Ms Salthouse, but it turned out “he has a drug problem that he didn’t acknowledge which is now affecting every area of his life”.

“It’s clear enough the offender has not only misled others but has been in a state of misleading himself in regard to his own drug use,” she said.

“I was staggered, having sat through listening to those victim impact statements, staggered … that he would resort to the use of methamphetamine again and drive.”

Crown Prosecutor Anthony Williamson said Laidlaw had been on bail facing the very real possibility of going to prison, and if that didn’t cause him to “straighten himself out” then no other court-imposed condition would.

Barrister Kieran Ginges said his understanding was his client would plead guilty to the fresh driving charges, and he will face them in the Magistrates Court in August.

Mr Williamson asked for the sentencing to continue on Friday. He said Laidlaw should be jailed and applied to revoke his bail.

He said Laidlaw has had “the sword of Damocles” dangling over him, being the prospect of going to jail, but despite that, his behaviour had “spiralled”.

Chief Justice McCallum allowed an adjournment so Laidlaw could be assessed for a Drug and Alcohol Treatment Order.

She said she was aware there had been “angst in the community” about how the court had been dealing with driving offences, but she wanted to stop the cause of offending, which in Laidlaw’s case appeared to be an untreated addiction.

However, despite Mr Ginges arguing otherwise, she revoked bail and adjourned to 29 July.

Ms Salthouse had just had lunch with a friend in a Canberra cafe on 20 July 2020 and was riding her three-wheeled, wheelchair-accessible motorcycle along Commonwealth Avenue when Laidlaw struck her from behind.

He was driving his Nissan Navara 10 km/h over the speed limit and the force of the collision made Ms Salthouse hit her head on the bonnet of his car while also propelling her motorcycle forwards.

Paramedics arrived soon afterwards and initially found her calm and jovial, but her vital signs began to drop and she died a few hours later in hospital.

Laidlaw’s mother, Deborah Laidlaw, has previously told the court that her son was “inconsolable” after the crash.

“He was devastated, as we all were. [He was] in shock. He couldn’t believe that an accident had happened,” she said.

“I still don’t think he can quite come to terms with any of that.”

The chief justice’s comments about “angst in the community” follow an anti-hoon road safety campaign by Tom McLuckie. He launched ACT Now for Safer Roads in the wake of his son’s death to bring about harsher penalties for serious motor vehicle offences in the Territory.

On 19 May, his 20-year-old son Matt McLuckie was killed by a speeding car travelling on the wrong side of the road.

To everyone who supports soft drug laws, you support these accidents and deaths on our roads…. You can’t have it both ways, you either support drug use and the crimes and death that come with it or you do not..!! its actually that simple.

The driver had meth in his system. Now that the government is going ahead with decriminalising hard drugs and making it legal to use them where will this end. At the moment it is difficult enough to try and stop drink driving, what will happen to efforts to stop driving with illicit substances in ones system. Interesting times ahead. If a drugged up driver kills an innocent driver or pedestrian will the government then have blood on their hands? There are so many what ifs to look at.