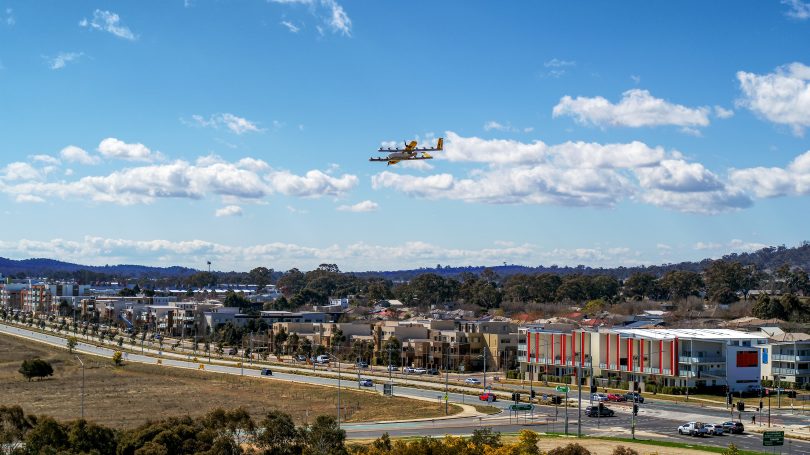 A Wing drone over Gungahlin. The company has completed a year of operations there. Photo: Wing.

If ever there was a business made for the coronavirus lockdown and social distancing, it’s Wing’s drone delivery services.

The Google subsidiary marked a year of flights over Gungahlin from its Mitchell base last week, and a spokesperson said there had been growing demand for its services since the restrictions began.

“As the Canberra community confronts the current COVID-19 pandemic, we understand a delivery option that limits the need for human-to-human contact can be helpful, and we’re trying to do what we can to support the communities we serve,” the spokesperson said.

“With Canberrans being encouraged to stay home, we’ve seen a dramatic increase in the number of customers using the service.”

Its customers have even been able to have the elusive toilet paper delivered.

More than 15 businesses have signed with Wing and the company has expanded its offering to include more products for house-bound Canberrans such as more frozen meals and hot food options, and is introducing new items such as colouring pencils and markers for children.

“We’re trying to support local businesses that aren’t able to open their doors by allowing them to deliver their products directly to customers’ homes,” the spokesperson said.

Wing has hundreds of customers in the suburbs where it is permitted to operate – Crace, Franklin, Palmerston and Harrison – and was gradually onboarding new people, the spokesperson said.

It had also taken measures at its Mitchell base to ensure the health and safety of staff and customers, including increasing cleaning and sanitisation, reducing staff on-site during operating hours, requiring non-essential staff to work from home, and enforcing social distancing for staff.

Wing does not release figures on the exact number of deliveries by city but the spokesperson said there had been several thousand in Canberra in the first 12 months of operations.

Wing says that in the year to 9 April, customers had ordered 2000 coffees, drones had flown 20,700 kilometres and 1500 hours worth of trips to the shops had been saved.

Earlier this year, the Department of Infrastructure, Transport, Regional Development and Infrastructure approved Wing’s operation to fly over Crace, Palmerston, Franklin and Harrison for another year to 31 January 2021.

Conditions, due to noise levels, include a limit of around 60 flights per day per suburb and only in daylight on certain days.

Wing is also required to collate all community feedback during the operational period and provide this to the department.

Wing’s trial operation in Tuggeranong was controversial, mainly due to noise and privacy concerns, but quieter drones and a more concerted community outreach program has meant few concerns being raised during its first year at Gungahlin.

Canberra (and Australia) hasn’t done too much about automobile noise pollution since the 1930s. We accept or bear the noise of automobiles everywhere we go in Canberra.
Around the lakes.
In the suburbs.
It’s almost inescapable.

If we don’t push the drone industry and politicians to hold the drones to some sort of noise standard — then nothing will be done. We should do the same for the cars on freeways, parkways and drives. Keep pushing.

Annoying noise when there is no break from it, from 8am for hours.

My partner and I did an exercise walk up Gungahlin Hill yesterday and found an area away from the Barton Hwy traffic noise to take in the views. We then heard what we first thought were a bunch of high powered motorcycles with aftermarket exhausts racing up and down the Gungahlin roads. It was only when we spotted the drones in the air that we realised where the noise was coming from. It was terrible! Incredibly noisy and highly intrusive.
If Wings think they are going to expand their operation to hundreds of flights they may find a bit more opposition coming their way.

Sick of them especially when they pass overhead several times in a few minutes. Unwanted invasion of privacy in a once quiet neighbourhood. They were booted out from southern Canberra why are they allowed in the north? If they are to be allowed to continue to operate they should be required to at least follow main roads so they noise would be less noticed. Why should we be subjected to noise and privacy invasion for others commercial gain?

I signed up weeks ago and still nothing 🤷🏼‍♀️

Under Scotty’s big post-COVID reset for manufacturing, surely we will lead the world in building them, not just flying them.

Brilliant service. Trust me the mustang across the road makes much more noise starting up. But that sounds great as well. Glad we can be part of the trial.

Just had one deliver 20m away in Harrison, it’s barely the sound of a whipper snipper. People are so sensitive these days.

Right, before this is over my goal is to have something delivered by drone to my balcony.

Bronwyn Gillon you mean like how we ignore traffic noise now.

Drew Triebe exactly my point. You get woken up by a lawn mower or a whipper snipper, you then go back to sleep and get on with life.

How is it not the same thing? It would be classed as Intrusive noise in the city noise ordinances, just like aircraft, cars and other vehicle noise.

I agree, this is exactly what we all need nowadays, more intrusive noise!

I live directly under where they fly, they deliver to my neighbors but not to my place

Helen Margaret Wallwork Erin Biskup that’s what it was

Why not Ngunnawal yet?

I wish we had this in our area!

Getting busier delivering to my neighbours but they say I’m not in area. Definitely starting to irritate me as it’s several times a day.

Yvonne Mac the “depot” is in my neighbourhood but i can definitely say i havent seen one yet!

It could probably carry a bottle though I think it has about a 1Kg load weight limit.

Has it stopped in tuggeranong?

Yes Bek it now pretty much only exists in Gungahlin.

Yeah look I know how you feel but it has been really handy for alot of people in Gungahlin.

I really wish it could have been expanded to include the entire Gungahlin area. To service those people who are in isolation and the elderly and those people who would find it difficult to get to the shops.

I saw it and was wondering

Emma Louise Swinbourne this is your drone.

Dawn Jones I dunno?. But if it flys over my airspace one more time…. It’s gone!!! lol 😂

Wish this was available in other suburbs…

They won’t verify new customers,so there must be lots of us registering but they can’t take deliver unless we get verified??

Helen Ritchie I signed up weeks ago and still waiting 😡

I was told they can’t deliver to my place

The model just doesn’t scale. With the noise you have to limit the number of flights, so either there is not much competition or it is going to be a small part of the business. It can’t be successful unless you are willing to accept constant noise. I assume that is the wish of the service providers.

It’s hard to imagine how a business using expensive tech to deliver 2000 coffees in a year could be profitable. Perhaps we need to look past the marketing spin and ask what Wing is really up to. 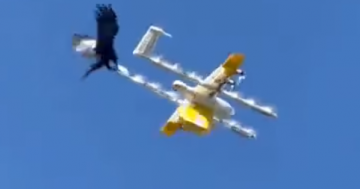 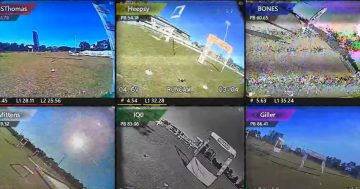 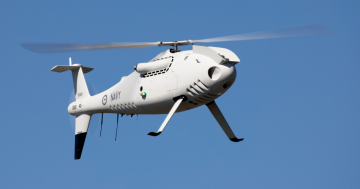 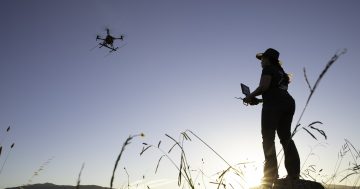