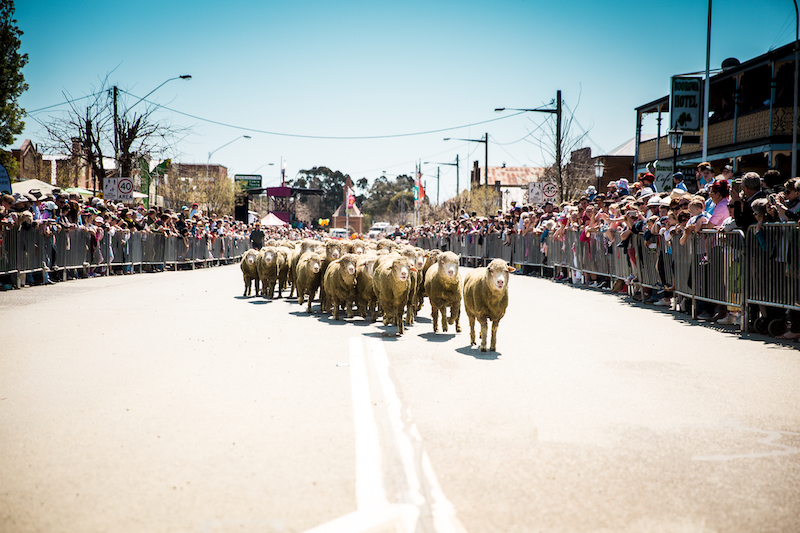 Boorowa’s famous Running of the Sheep will be held at 12:00 pm on 6 October. Photos: Hilltops Council.

Locals and tourists alike will flock to Borrowa this weekend for the 23rd Irish Woolfest – a welcome distraction from the drought that’s ravaging NSW.

At this time of year visitors to Boorowa would normally be greeted with fields of canola in flower but the drought has changed that. Smaller displays of canola can be seen as you approach Boorowa, but there is no moisture underneath the crops and most will be cut for hay or silage.

“The frosts and lack of rain have taken a toll; not too many crops will be stripped,” according to farmer Tom Corkhill who runs a rural supplies business in the town. “It is a lot better than when you drive anywhere north of here. The district will look pretty good when people arrive, there is a green tinge from the 35 mm of rain we received a while back, but we needed double that.”

A highlight of the annual event is the Running of the Sheep, scheduled for 12:00 noon on 6 October.

Tom’s brother Ash drives the four-wheel bike behind the mob for the Running of the Sheep, and plenty of onlookers will be there to see the hardy little Merinos from the renowned Merryville Merino Stud trotting down the main street of the town. 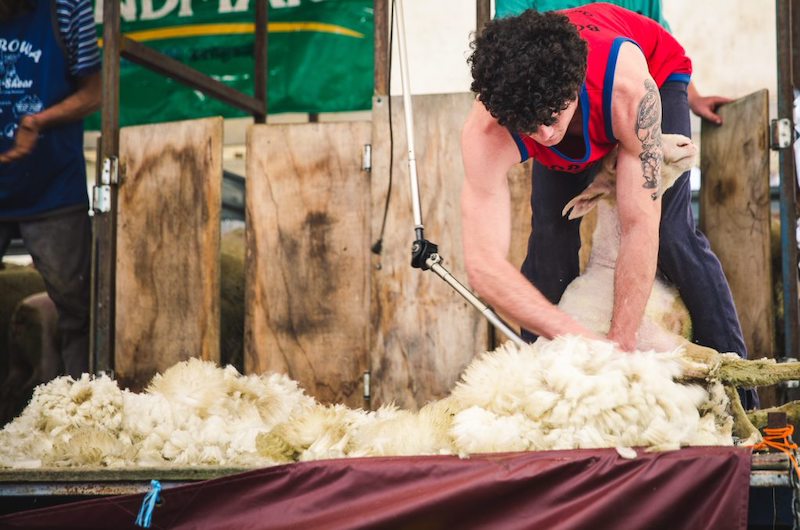 The 2019 Quick Shear Competition will be held at the Court House Hotel on Saturday, 5 October at 11:00 am.

Sheep are the mainstay in these dry times for rural towns, with lamb prices and the wool market holding up well. But mutton prices are falling back as farmers continue to off-load their stock.

You will also find a variety of sheep popping up at the art show, which this year will raise money to repair stained glass windows in St John’s Anglican Church, Boorowa. Art show organiser Tina Merriman says guest artists from Sydney, Wollongong, South Australia, The Mullion near Yass, Cootamundra and Narromine will be presenting their work.

“All the paintings must be framed and ready for sale. Some are extraordinarily beautiful landscapes and still life,” Tina says. “We don’t have a particular theme but you tend to find a lot of sheep,” Mrs Merriman says.

The show opens with a cocktail party at the Old Court House on Friday, 4 October. The exhibition will be open over the long weekend.

While Hilltops Council has joined the community organisers in recent years promoting Woolfest, it still remains largely a community-driven effort. Everyone lends a hand.

Organisers assure visitors the drought won’t distract them from staging a great spectacle.

“People do what they have always done,” Tina says. “They may be more inclined to buy a bale of hay, what else can you do? We are hoping to attract some city money for the paintings.”

The feature event of Woolfest remains the running of the sheep at 12:00 noon on Sunday down the main street of Boorowa. This will be followed by a street parade of 40 floats which illustrate the village and surrounding district’s lifestyle and sense of humour.

One of the feature acts will be Canberra and Queanbeyan’s Mad Kelpie Playdate, a five-piece instrumental Celtic band that provides a modern take on traditional Celtic music, with influences from bluegrass and pipe bands.

The Canberra Celtic Pipe Band and Canabolas Highland Pipe Band will also be performing throughout the day. Old Kentucky Animal Farm is always a favourite with the children with a menagerie of animals to discover. Other children’s activities include Tony Joe’s Amusements and Pirate Pete.

Wood chopping and working dog demonstrations and fireworks will provide plenty of variety in entertainment. The Off the Sheep’s Back Fashion Parade will showcase the latest woollen fashions on the Main Stage. More than 70 stallholders will be on display with fashions, produce and plants, garden features and handcrafted items.

Visit Irish Woolfest to learn more about the weekend’s activities.